US to expand war drills in S. China Sea 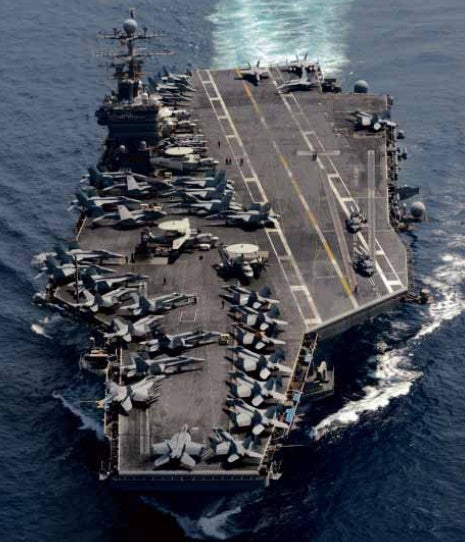 CAMP H.M SMITH, Hawaii—The chief of the US forces in the Pacific on Wednesday defended US freedom of navigation operations in the disputed South China Sea, saying these are aimed at reducing tensions in the region.

Speaking to visiting journalists from Southeast Asia ahead of the special summit of the 10 Southeast Asian leaders, including President Aquino, with US President Barack Obama in California next week, Adm. Harry Harris Jr., US Pacific Command (Pacom) chief, also stressed the US desire to expand military exercises in the South China Sea.

“The patrols we have, whether singularly or jointly, not only in the South China Sea but also in the region help decrease tension and improve stability because it reinforces the notion that freedom of navigation is important,” Harris said at Pacom headquarters here.

Harris, however, refused to confirm reports that the United States and India plan to conduct joint patrols in the South China Sea.

“I am not going to talk about future joint patrols,” he said, adding that any statement about the US plans would be mere “conjectures.”

The United States wants its regional allies and other Asian nations to adopt a more united stance against China over the South China Sea, where tensions have spiked since China’s construction of seven artificial islands in the Spratly archipelago.

China claims most of the South China Sea, while Brunei, Malaysia, the Philippines, Vietnam and Taiwan have rival claims.

A US defense official told Reuters this week the United States and India had held talks about joint naval patrols that could include the South China Sea.

The official, who spoke to Reuters on condition of anonymity, said the United States and India were hopeful of launching the joint patrols within the year.

The official, however, gave no details on the scale of the proposed patrols.

A Pentagon spokesperson, Cmdr. Bill Urban, said the United States and India “continue to explore ways to deepen defense cooperation, including in the area of maritime security,” but no decisions had been made on joint patrols.

On Thursday, China warned that interference from countries outside the region threatens peace and stability.

“No cooperation between any countries should be directed at a third party,” Chinese foreign ministry spokesperson Hong Lei said in an e-mailed statement to Reuters, in response to a request for comment on the report published on Wednesday.

“Countries from outside the area must stop pushing forward the militarization of the South China Sea, cease endangering the sovereignty and national security of littoral countries in the name of freedom of navigation and harming the peace and stability in the region,” Hong said.

China accused the United States this month of seeking maritime hegemony in the name of freedom of navigation after a US Navy destroyer, the USS Curtis Wilbur, sailed within 22 kilometers of the disputed Triton Island in the Paracel chain in the South China Sea in late January.

The US Navy conducted a similar exercise in October, sending the guided missile destroyer USS Lassen sailing near one of seven artificial islands China had built in the Spratly archipelago.

The Philippines has proposed joint naval patrols with the United States in the South China Sea, something a US diplomat said this month was a possibility.

Harris said he welcomed any plans from countries in the Pacific to join the US freedom of navigation operations, the American challenge to China’s claim to almost all of the 3.5-million-square-kilometer South China Sea.

“I welcome Japan’s potential of patrolling in the South China Sea, just as I welcome India’s and I welcome all of your navies’ abilities to patrol there,” he said.

At the briefing, Harris spoke against what he called were China’s “bullying tactics,” admitting he had been critical of China ever since he assumed his post as the Pacific Fleet commander in 2013.

“China’s approach is not only salami-slicing the region but it [also] likes to apply bullying tactics with each Asean country bilaterally, one on one, rather than taking on Asean (Association of Southeast Asian Nations) as a whole,” he said.

Harris noted that the recent developments in the South China Sea call for the conclusion of a legally binding code of conduct for all the claimants to ensure peace and stability in the region.

The closest to such a code that the Asean and China have  is the 2002 Asean-China Declaration on the Conduct of Parties in the South China Sea, which requires the claimants to maintain the status quo to avoid tensions.

“You should work stronger together as Asean. I applaud your efforts, Vietnam and the Philippines, to hold China accountable,” he said.

The Philippines, a US treaty ally, has taken its territorial dispute with China in the South China Sea to the United Nations Permanent Court of Arbitration in The Hague for resolution.

The court is expected to hand down a resolution by June.

Vietnam, a strategic partner of the United States and the Philippines, has bolstered the Philippine case through a position paper submitted to the UN arbitral tribunal.

The US-Asean summit next week will cast light on Obama’s rebalance to Asia strategy, a significant shift from the US focus on the Middle East.