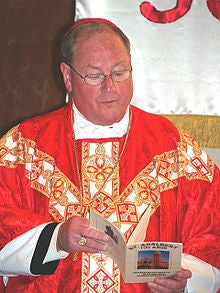 “What a joy, what an honor to be with you here today,” he told the cheering 15,000 delegates from 71 countries at the IEC Pavilion in the Saint John XXIII and Blessed Paul VI seminaries here.

Dolan and a big delegation from the US East Coast were supposed to arrive last Jan. 25 when the congress proper opened, however, they were stranded after hundreds of flights were canceled because of the massive snowstorms.

READ: Flight cancellations, delays persist in wake of US blizzard

Dolan however made it later and he helped say the IEC Mass with Dublin Archbishop Diarmuid Martin at the Cebu Provincial Capitol that was attended by at least half a million people, police and organizers said.

Dolan, who was named by Time Magazine as one of the most influential Americans today, praised Filipinos for their dedication to the Catholic Church.

Dolan said Filipino parishioners is in his own archdiocese were very devoted to the Church.

‘We appreciate their warmth, their joy, their dedication to family, and their loyalty to Catholic faith,” he said.

A popular broadcast personality noted for his height and heft that make him look like Santa Claus, Dolan made the IEC laughed by making fun of his weight.

Apologizing for forgetting to wear his red cardinal sash in his waist, he blamed Cebu Cardinal Emeritus Ricardo Vidal. “(He) won’t lend me his,” he said.

READ: For top church leader, IEC a journey of faith

However, he said that was okay because “I would need two (sashes).”

Midway into his “catechesis,” a feature of the IEC in which the speaker would talk about certain aspects of the Holy Eucharist as a form of Christian instruction, Dolan wiped the sweat off his brow and said, “I think I lose five pounds when I talk.”

At one time, Dolan sang a few verses of a popular song about the Eucharist with some effort, then stopped and told the crowd: “Thank you for your patience for my singing,” he said. “I sing better after San Miguel (Beer).”

He added, “Much better after two (bottles).”

When bottled water was brought to him, Dolan quipped: “Oh, I asked for San Miguel!”

Talking about “Mary and the Holy Eucharist,” Dolan said the Virgin Mother was an “intimate part” of the Eucharist since she carried Christ in her womb.

Dolan said what was good was that Catholics could carry Christ in them like Mary when they receive Communion.

“What Mary carried in nature we carry in supernature,” said Dolan, a theological scholar who taught one time at the Angelicum, the pontifical university in Rome.

Dolan said that Mary was with Jesus during the Crucifixion so that Catholics should be prepared to face persecution and suffering.

He referred to the homily during the IEC Mass last Jan. 28 of Hungary Cardinal Peter Erdo of the sufferings of Catholics during the Communist persecution in Eastern Europe.

He likewise addressed Chinese Catholics and reminded them of Bishop Dominic Tang who was arrested after the Communist takeover.

The New York cardinal said that after five years of prison, Tang was offered by Communist jailers a reprieve to be able to do anything he wanted for a day.

“Bishop Tang told them: ‘I want to say Mass,’” Dolan said. “Then [he] was brought back to his cell and the door was locked.” RAM