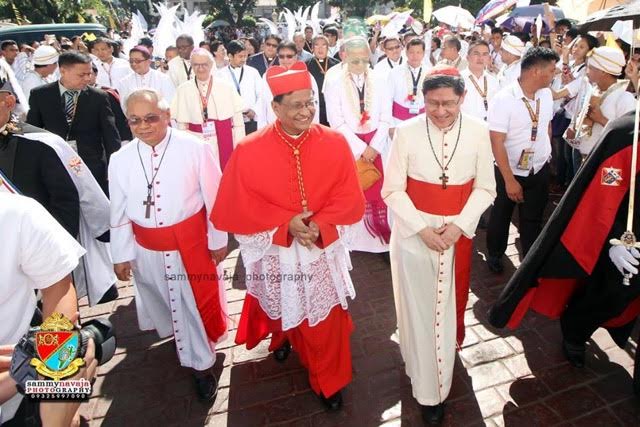 Cardinal Charles Maung Bo arrives at the Cebu Cathedral Sunday morning (Jan. 24, 2016). He was welcomed among others by Cardinals Luis Antonio Tagle of Manila and Orlando Quevedo of Cotabato. On Tuesday, Jan. 26, Los Angeles Auxiliary Bishop Robert Brown asserts the importance of the Holy Mass while admitting that a big percentage of Catholics don’t attend Sunday Mass and young people find it boring.  PHOTO BY SAMMY NAVAJA

“That 70 percent of Catholics stay away from the Eucharist is a spiritual disaster,” said Los Angeles Auxiliary Bishop Robert Barron, who gave on Tuesday the “catechesis,” or Catholic instruction, a key feature of the IEC.

Barron, founder of the Word on Fire media ministry, was apparently referring to statistics of American Catholics, 31.4%, although a 2013 Social Weather Stations survey showed the number of Filipino Catholics regularly attending Mass had gone down to 37% from more than 60% in the 1990’s.
But Barron, well-known American broadcast and social-media personality and inspirational speaker and author, indicated Western Catholics could learn from Filipinos Catholics, “whose faith, energy is exciting.”

In a press conference, the American prelate praised Filipinos for “playing a big role” in his own Archdiocese of Los Angeles and “vividly” living their faith.

Earlier, it was disclosed that of the 720,000 people who followed Bishop Barron on Facebook, 250,000 lived in the Philippines.

“It’s a testament to the surprisingly, overwhelmingly vibrant quality of Catholic life in this great country (the Philippines),” Barron commented.

In her “testimony,” another feature of the IEC, Servais said she was born a Protestant but converted to Catholicism in the Philippines because she found Filipino Catholics happy and forthright in expressing their faith.

“Not a day passes that I am not thankful that God drew me to the Catholic Church and the Eucharist,” she said.

Cardinal Gaudencio Rosales, retired archbishop of Manila, urged the 14,000 delegates from at least 71 countries to renew their devotion to the Mass.
“Let the Eucharist bring Jesus back in our midst,” he said in the High Mass of the second day of the congress proper at the IEC Pavilion in the Pope John XIII Seminary in Mabolo village here.

Held every four years in the contemporary era, the IEC, which started at the turn of the 20th century, is supposed to discuss ways on how Catholics could renew their commitment to the Holy Eucharist, referring both to the ritual or ceremony that Catholics must observe every Sunday that memorializes Christ’s sacrifice on the cross , and to the Host, the white wafer that symbolizes his body and blood that Catholics are supposed to consume for spiritual nourishment.

Despite the deep meaning of the sacrament or symbolism of the Mass, Catholics, according to IEC delegates, may be lost to most Catholics today.
Barron did not give reasons why Catholics stay away from the Mass, but indicated they do not understand its meaning and significance fully.

A theological scholar who obtained his doctorate from the Institut de Catholique de Paris and taught at the Angelicum in Rome, Barron said the Eucharist was a memorial of Christ’s sacrifice which in itself updated Old Testament sacrifice.

“In a world gone wrong there is no communion without sacrifice,” the prelate said. He said Christianity through its many persecutions and crises in history has been a force to rebuild and reunite the world.

“Why have we come here in Cebu?” asked Barron. “To worship the God of Israel! That’s the power of the Eucharist.”

In a press conference, Barron decried secularism for denying transcendence.

“Secularism is a spiritual disaster because we’re built for God,” the US prelate said. “Secularization flattens life.”

He said the restlessness of the youth reflected St. Augustine’s restlessness for God and was just a mirror of secular society’s overall alienation as shown in drug abuse, family breakup and social breakdown.

He said the Church plays a “profound role” to uniting families and society by reminding them of God.

But while he might be using the new media to spread the Gospel of Christ as a media personality, Barron cautioned against adapting the Mass too much for popular and younger taste. “The young can see through all of this,” he said.

He said he would like to see a combination of “old and new media” to promote the faith. He explained that the teachings of the Church should be “read and understood” through the “old media” of books and publications in the first place.

Vatican-based Archbishop Piero Marini told a press conference that the Eucharist was “not just a celebration of rubrics,” or a matter of following rules on liturgical service.

Marini said the Mass was the foremost prayer of the Church and developed from the liturgies of the early Christian communities in Asia Minor—from the Coptic, Alexandrine, and Byzantine churches— later incorporated more or less in the present form of the Roman Rite.

He said care should therefore be observed that any innovation of the Mass would make it remain true to tradition.

But citing the Second Vatican Council decree on the liturgy, “Sacrosanctum Concilium,” Marini, who heads the Pontifical Committee for International Eucharistic Congresses, said the liturgy should enjoin and foster “participation.”

“The important word here is adaptation,” the Holy See official said. “To enable wider participation in the liturgy, there’s a need to adapt it to the particular cultural situation.”

While agreeing with the need for liturgical reforms, Bishop Julius Tonel of Ipil, Zambales, chairman of the liturgical committee of the Catholic Bishops Conference of the Philippines, said there should be no “unbridled” experimentation and that the atmosphere of “reverence” should be preserved. TVJ

Heavy traffic in Cebu City due to IEC road closures