Abandoned by the government–this is how the Malaya Lolas feel in their quest for justice for the abuses they suffered during the World War II under the Japanese regime.

Lola Belen Culala, 84 said not one from the government has talked to them.

(No one is talking to us. No one from the Philippine government has extended assistance to us.)

She said presidents come and go but their pleas fall on deaf ears.

“Mga babae kami, anong kaya namin kung hindi kami tutulungan ng nanunungkulan?” she said, adding that they go to the streets to protest but it seems no one was listening.

(We are women, what can we do if those in power do not help us?) 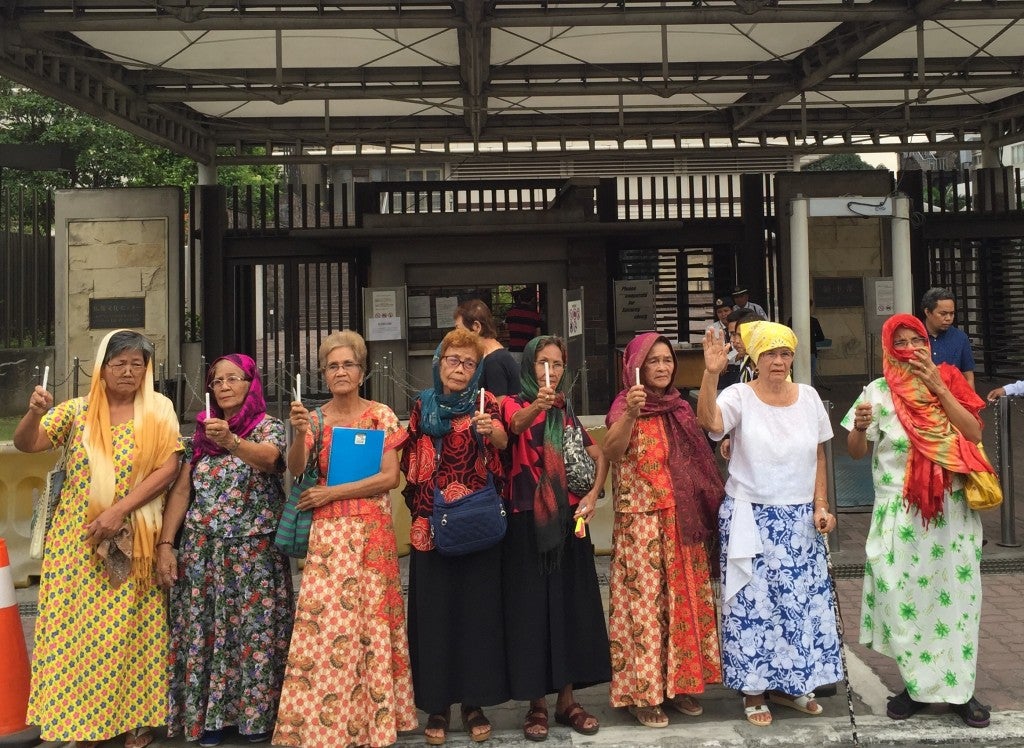 Filipina comfort women outside the Japanese embassy call for justice for the abuses they suffered during World War II. TETCH TORRES-TUPAS/INQUIRER.net

Lola Isabelita Vinuya, said they were originally 90, but only 32 are left now.

Vinuya, on the other hand, said they are hoping that the Japanese Emperor would give them their just compensation.

(We are already weak and old, and we wish to afford hospitalization. We hope you will grant our compensation.)

Vinuya said if only the President Benigno Aquino III would only support their pleas, their fate would be the same as that of the comfort women in South Korea.

In December, Japan and South Korea reached a deal where Japan apologized and gave over a billion Japanese yen. The South Korean government has supported the pleas of the comfort women in their country.

Aquino remained mum on the pleas of the comfort women during his meeting with Emperor Akihito and Empress Michiko of Japan.

In a statement, Presidential Communications Operations Secretary Herminio Coloma Jr. said reparations for the abuse of the World War II victims have long been resolved by the government.

He said the government will not block any private claims for war crimes.

It has been the position of Malacañang that the Philippines and Japan had already settled reparations from the war in previous agreements, among them the Reparations Agreement signed in May 1956, that had Japan providing the Philippines with $550 million worth of goods and services.

But the comfort women said they were never part of that agreement. IDL