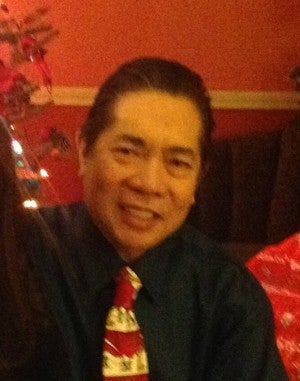 CHICAGO-The son of the late and noted Philippine journalist, Eddie Monteclaro, succumbed January 24 to brain injury he suffered when he slipped on the icy pavement of his driveway in Carpentersville, Illinois, a northwest Chicago suburb.

Eddie Jonathan, Jr. was going to dispose of his family Christmas tree on January 6 when the accident happened and he bumped his head severely.

His sister Melanie Monteclaro said in an interview that his brother did not see a doctor right away because there was no sign of external swelling, but he collapsed the following day.

His wife, Loida, rushed him to a local hospital where he was found to have severe bleeding and swelling of the brain.

Monteclaro was in a coma at the Journey Care Hospice in Barrington, Illinois for 18 days and died as soon as life support was removed last Sunday, January 24. He would have turned 64 years old on February 27.

Melanie Monteclaro emphasized the importance of sharing the circumstances of his brother’s death. She warned, “When a similar accident happens, one must not waste time by having yourself examined by a physician.”

She recalled the death of actress Natasha Richardson, who failed to see a doctor on time after she hit her head in a skiing accident. Richardson was the wife of actor Liam Neeson.

Eddie Jr. along with his mother, Rudi (now deceased), and three siblings—Melanie, Byrnise and Phyllis—arrived in Chicago in 1979 by virtue of a petition granted to their father, Eddie, Sr. who was granted a political asylum visa by the U.S. Immigration.

Their father was the president of the Philippine National Press Club (NPC) when martial law was declared by President Ferdinand Marcos in 1972.  He was also the managing editor of the then–leading Philippine news daily, The Manila Times.

Eddie Monteclaro, Sr. escaped the dragnet that caught leading critics of the Marcos dictatorship. Manila Times publisher, Chino Roces, was one of those imprisoned in Camp Crame.

In Chicago, Eddie, Sr. served as editor of the Philippine Times from 1974-75 while he landed a job as copy editor of the Chicago Sun-Times.  He also supported the anti-Marcos group, Movement for Free Philippines (MFP). He died of heart failure in Chicago in 1987.

Eddie,Jr.  finished  Bible Ministry at Moody Bible Institute in 1986 and worked for the institution for 23 years. He was employed by AWANA Children Ministry at the time of his death. He also studied business administration at the Philippine Christian University in Manila before he migrated to the U.S.

He is also survived by his two sons, Jonathan Howard and and Lloyd Edward.  Wake will be on January 30, 3-8 p.m., at Ahgrim & Sons, 330 W. Golf, Schaumburg, Illinois.  Funeral  Service is on January 31 at Awana Clubs International, 1 E. Bode Rode, Streamwood, Illinois.