Filipinos in Oxon Hill, Maryland look over DAPA materials during an information briefing organized by APALA, SEIU and I-America. PHOTOS BY JOHN MELEGRITO

WASHINGTON, D.C.–Heartened by the Supreme Court’s (SCOTUS) recent decision to review President Obama’s executive actions on immigration, activists in immigrant communities are stepping up their campaign for reform, hoping to build momentum all the way to the ballot box.

“But even if the court does not sustain the White House appeal, we will continue to raise the issue during the presidential campaign. It’s time for Filipino Americans and the broader Asian American and Pacific Islander community to make our voices heard at the polls. Our collective power is what it will take to secure a victory in our long term fight for comprehensive immigration reform,” Cendana added.

This collective power was on display on January 15 when more than a hundred immigrant families and activists representing Asian American Pacific Islander, African American and Hispanic American civil rights organizations rallied in front of the Supreme Court. They chanted “No Deportation” and waved signs that read “Stop Separating Families.” 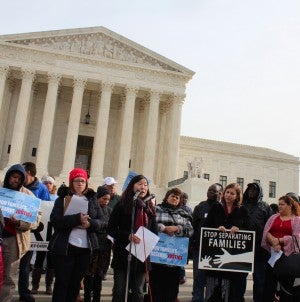 Asian American and Pacific Islander advocates join Hispanic American activists and families in front of the Supreme Court on January 15.

Emily Kessel of the National Korean American Service and Education Consortium (NAKASEC) said, “The mean-spirited lawsuit is without merit.” While waiting for the court to hear arguments on the case, she added, “We remain committed to lifting up the AAPI vote at the ballot this November and fighting to make fair comprehensive immigration reform a reality for our community at large.”

The nation’s highest court doesn’t take up too many cases. But three days after the rally, it agreed to review Obama’s executive order establishing the DAPA and expanding the 2012 DACA program (DACA+).

A decision from the nation’s top justices is expected in June, a month before the national Republican and Democratic parties select their presidential nominees.

Obama signed the order on November 2014 after the Republican-controlled Congress failed to enact changes in the country’s immigration policies. But a Texas court challenged the constitutionality of the president’s immigration Executive Action. Twenty-six states have since sued the government in federal court.

Last November, the U.S. 5th Circuit of Appeals decided to block the implementation of the Expanded DACA and DAPA programs from taking effect, leaving millions of undocumented immigrants, including more than 400,000 Asian Americans and Pacific Islanders, in limbo without administrative relief.

The Migration Policy Institute estimates that 46,000 Filipinos are affected and would benefit from Obama’s plan, allowing them to obtain work authorization and the right to remain in the U.S. without the threat of imminent removal or deportation.

Immigration has always been a contentious issue, taking on more prominence during the presidential campaign. While the Democrats have overwhelmingly supported the President, Republican candidates (notably Donald Trump) have called for mass deportation of all 11 million undocumented immigrants. Republican congressional leaders have also accused Obama’s actions as “executive overreach,” vowing to block his moves on immigration.

“The sad reality is that this has been and will continue to be politicized by conservative Republicans who claim to be advocates for our families,” Cendana pointed out.

She added: “Fourteen months have passed since this immigration executive action was first introduced but the programs have stalled and have yet to be implemented due to the politically motivated lawsuit led by Republicans. We are hopeful the Justices of the highest court in the country will make the right decision to reverse the injunction and grant relief to millions undocumented Americans and their families.”

Immigrant rights advocates, while disappointed with Homeland security’s recent immigration raids, have nonetheless applauded Obama’s position that immigration priorities shouldn’t be the separation of families who have established lives in the United States and are good law abiding citizens. 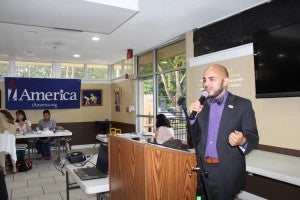 “If the Supreme Court votes to allow the President to pass DAPA, it will probably be his last victory on the immigration front before the term of his office expires,” said Mayee Crispin, formerly a labor activist with the Service Employees International Union (SEIU).

In Chicago, the Alliance of Filipinos for Immigrant Rights and Empowerment (AFIRE) is gearing up for the presidential elections by educating and mobilizing voters to register and vote. “The future is in our hands,” reads an infographic posted by AFIRE. “Our voice and our vote will elect the next president who must continue to defend DAPA/DACA+ and champion immigration reform.”

Jerry Clarito, former AFIRE executive director, said he hoped the “ongoing hateful rhetoric against immigrants” would backfire in the polls. “No matter how the court decides, we must continue to be vigilant in protecting and expanding the rights of immigrants.”

Expectations were high in the spring of 2013 when a bipartisan group of eight Senators introduced a comprehensive immigration reform (CIR) bill. This was preceded by massive demonstrations in Capitol Hill. Although the measure was passed by the Senate, the House – dominated by conservative Republicans – basically killed the legislation.

Congress’ failure and grassroots pressure to fix a broken immigration system eventually forced the president to use his executive powers. On August 2014, immigrant rights activists staged the largest civil disobedience protest in front of the White House.

More than a hundred activists, elected officials, labor and faith leaders were arrested in what was billed as “National Day to Fight for Families.” Obama signed his executive order three months later. 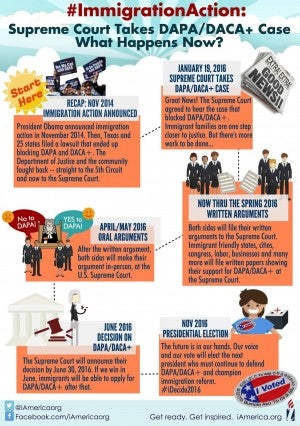 For its part, the Philippine Embassy partnered with local organizations in various cities across the nation to inform eligible Filipino youth to avail of immigration relief benefits.

“Despite what the Supreme Court’s decision will be later this year, undocumented immigrants, like myself, are all still facing the threat of deportation every day as seen through the recent immigration raids that arrested over 120 Central American immigrants and their families,” said Yves Gomes, APALA National Executive Board Member.

“APALA will continue to push for comprehensive immigration reform until there is a clear pathway to citizenship inclusive of all immigrants and addresses the criminalization of black and brown communities.”