‘Voices of People Power’ on 30th anniversary of Marcos ouster 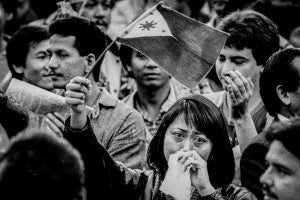 SAN FRANCISCO–“Voices of People Power,” featuring former anti-martial law activists, who will share their experiences in the anti-dictatorship movement and how the EDSA revolution affected their lives, and the screening of the award-winning documentary “My Revolutionary Mother” by Jethro Patalinghug.

Admission is free, and light refreshments will be served. Open to the public. The event marks the 30th anniversary of the historic uprising on February 25, 1986 that ended the dictatorship of Ferdinand Marcos, after 14 years of corrupt and bloody rule.

This event is hosted by the Philippine Consulate General of San Francisco and the EDSA/People [email protected] Committee, as part of a month-long build-up of activities taking place in San Francisco, culminating in a February 25 anniversary day main event, also at the Consulate.

Presentations at this “Voices of People Power” event include:

Benjamin “Boying” Pimentel:
Inquirer.net columnist and author of An Underground Tale: The Journey of Edgar Jopson and the First Quarter Storm Generation, will speak on the fear and silence that prevailed during martial law, and the activists who defied the dictatorship for over 13 years, before the EDSA People Power uprising

Cindy Domingo:
A longtime community activist in Seattle, will discuss the successful pursuit of justice for the murders of union leaders and anti-Marcos activists, Silme Domingo and Gene Viernes, and how the colonial relationship between the U.S. and the Philippines facilitated the surveillance and harassment of Filipino activists in the U.S.

Jethro Patalinghug:
A LGBT activist and award-winning filmmaker/video producer, will present his much-acclaimed documentary “My Revolutionary Mother.” The 30-minute film explores his mother Virginia Patalinghug’s struggle to balance her community organizing and raising her family during martial law, as well as Jethro’s own journey toward reconciliation with his mother.

The other events in San Francisco, building up to February 25, include:

• An exhibit at the Consulate of the works of photojournalist, Kim Komenich, who won a Pulitzer Prize for his images of the February 1986 revolution;

• Book-launchings and readings, and other events.