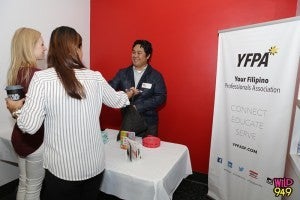 At a YFPA Tambayan. CONTRIBUTED PHOTO

SAN FRANCISCO–The organization formerly known as Young Filipino Professionals Association, announced a name change to the abbreviated “YFPA” as it acquired 501(c)(3) status as a non-profit.

The non-profit status will enable YPFA to soliicit donors and sponsors to help support its annual college scholarship goals for students in the San Francisco Bay Area. All donations and sponsorships done through YFPA will be tax deductible due to its change of status.

The organization has recently inducted a new group of leaders with the goal of increasing membership and “empowering the next generation of young Filipino American professionals” by providing more scholarships this coming year.

The new board members are:

In fourth quarter of last year, YFPA launched “Tambayan” campaign which will enable it to create a bigger outreach throughout the SF Bay Area by holding mixers and fundraisers in different venues in the East Bay, South Bay, Peninsula and San Francisco.

Derived from a Filipino term, “Tambayan” means a “hangout.” YFPA‘s Tambayan mixers are an opportunity for connections among professionals in the SF Bay Filipino American community. This is also a way to raise funds for the scholarships awarded in spring.

To date it has covered the East Bay, West County and San Francisco. In 2016 it is extending its outreach within the South Bay and the Peninsula.