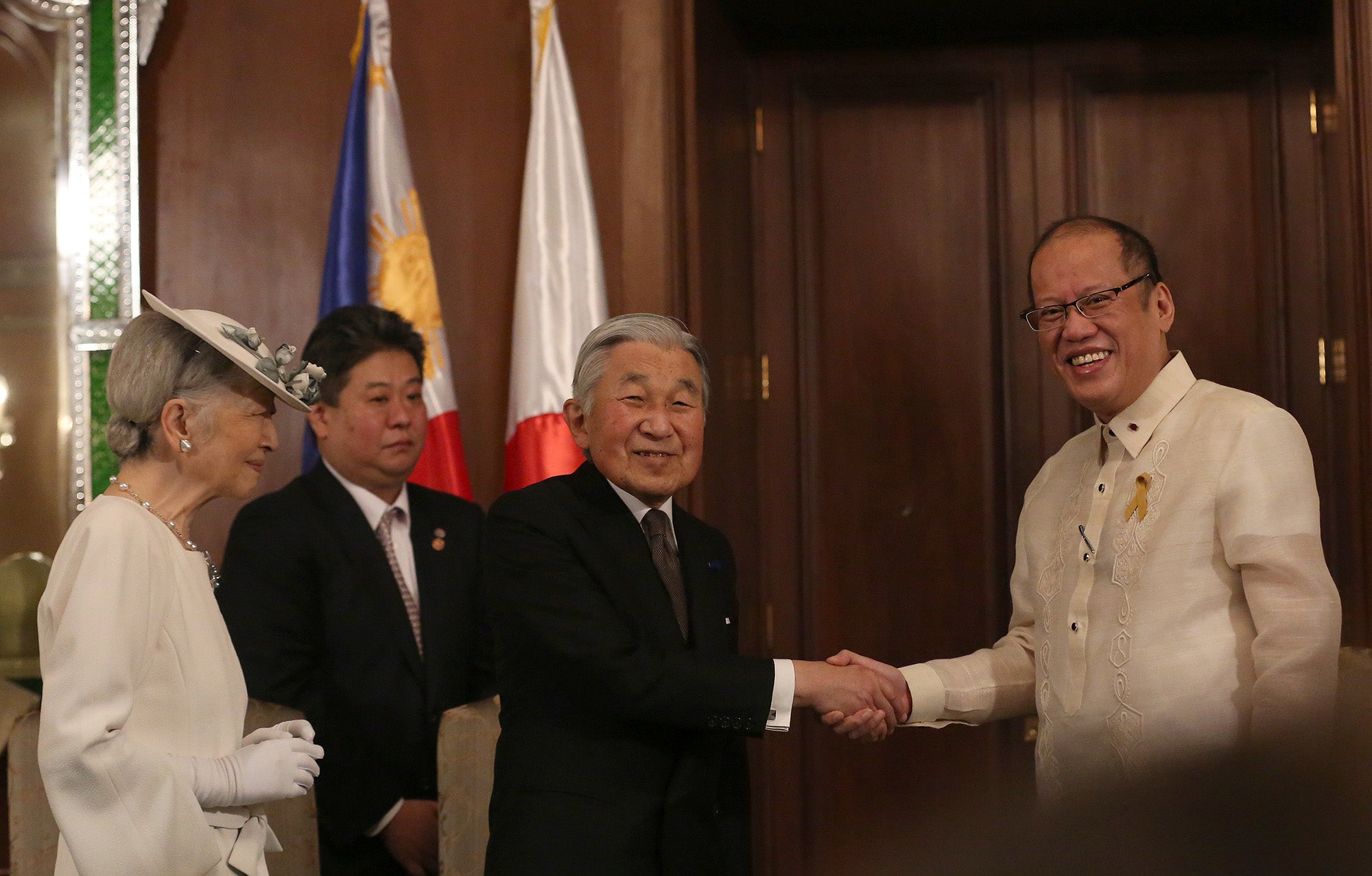 Visiting Japanese Emperor Akihito has urged the younger generations of Japanese and Filipinos to “keep alive the memories” of World War II as a way of avoiding conflict amid growing tensions in the East and South China Sea.

Akihito, 82, accompanied by Empress Michiko, met privately with President Aquino Wednesday, the second day of his five-day visit to the Philippines, and expressed remorse over atrocities in the region by the  Imperial Japanese Army 70 years ago.

“During [the] war, fierce battles between Japan and the United States took place on Philippine soil, resulting in the loss of many Filipino lives and leaving many Filipinos injured. This is something we Japanese must never forget and we intend to keep this engraved in our hearts throughout our visit,” Akihito said at a banquet with Mr. Aquino last night.

Mr. Aquino, in turn, praised the emperor’s role in reconciliation, saying: “I am held in awe, recognizing the burdens you have borne, as you have had to live with the weight of the decisions made by others during the dark episodes in the history of our nations.”

Akihito, visiting to mark 60 years of diplomatic ties between Japan and the Philippines, wanted to remind young people who had not experienced the war not to forget the hardship it brought to both Japan and other Asian countries, his press secretary, Hatsuhisa Takashima, told reporters during a dinner hosted by the Japanese Embassy on Tuesday night.

“It’s a thing that should not be repeated,” Takashima added. “He has a strong feeling toward war … and that’s the reason he came here.”

He said the emperor, who as a child had experienced the horrors of war, was worried the younger generation would forget the memories of World War II.

Akihito, he said, was 11 years old when he was sent to the mountains to escape American bombings in Tokyo toward the end of the war.

“When he came back to Tokyo, he was astonished to see the devastation. Nothing was left, just ruins,” Takashima said.

“How can war destroy everything? That is the sort of feeling shared not just by the Japanese people but also in many countries [occupied] by Japan during the war. That is the reason the emperor is strongly advocating to keep the memory alive in his country,” he said.

The emperor’s comments came against a backdrop of growing regional tensions as China pressed more assertively its claims in the East China Sea and almost the entire South China Sea.

China and Japan are locked in dispute over ownership of five uninhabited islands in the East China Sea, while Brunei, Malaysia, the Philippines, Vietnam and Taiwan are contesting China’s claim to 90 percent of the 3.5-million-square-kilometer South China Sea, which is believed to have huge deposits of oil and natural gas.

Akihito, banned by the Japanese Constitution from any political role, has often urged his nation not to forget the hardships that came with World War II and tried to promote reconciliation with Japan’s neighbors.

He has made honoring Japanese and non-Japanese who died in the war a touchstone of his near three-decade reign—known as Heisei, or “achieving peace,” and now in its twilight.

Akihito has also previously journeyed to other Pacific battle sites where Japanese troops and civilians made desperate last stands in the name of his father, Emperor Hirohito.

Last year Akihito and  Michiko visited Palau to mark the 70th anniversary of the end of World War II.

In 2005, they visited Saipan, site of one of the fiercest battles of the war in the Pacific.

In the Philippines Wednesday, Akihito and Michiko led wreath-laying rites at Libingan ng mga Bayani, where Filipino soldiers, including many who fought in the war, are buried.

Tomorrow the emperor and his wife will fly by helicopter to Caliraya, Laguna province, to visit a memorial garden built by the Japanese government there to honor the Japanese soldiers who died in the Philippines during the war.

Before leaving Tokyo on Tuesday, Akihito said a main focus of his trip to the Philippines was to honor the war dead.

“In the Philippines, many lives of Filipinos, Americans and Japanese were lost during the war,” Akihito said.

He specifically referred to the battle for the liberation of Manila in 1945 in his remarks.

“We’d like to conduct our visit by always keeping this in mind,” he said.

“The emperor will serve as the apologetic, sincere face of Japan … it will balance out his government’s controversial, pugnacious and seemingly revisionist statements,” Heydarian said.

Conservative Japanese Prime Minister Shinzo Abe angered China and South Korea when he marked the 70th anniversary of Japan’s surrender last year by saying that future generations should not apologize for the war.

Takashima denied that Akihito’s pacifism was a show of opposition to Abe’s plans to expand the Japanese Self-Defense Forces’ role overseas.

“The emperor’s existence is beyond the daily politics and state of affairs,” he said. With reports from Nikko Dizon, the wires