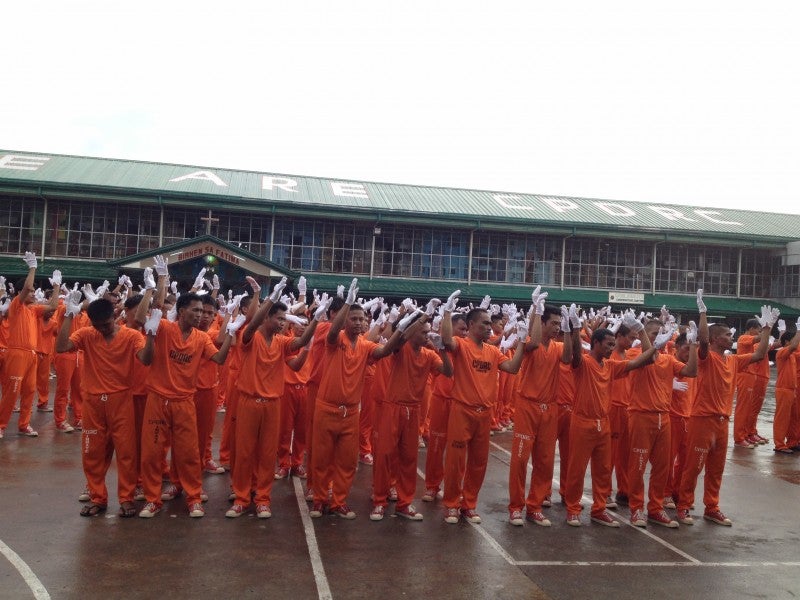 CEBU CITY— The drizzle on Tuesday didn’t stop the more than 800 inmates of the Cebu provincial jail from giving a heartfelt performance before the Burmese cardinal sent by Pope Francis to represent him at the 51st International Eucharistic Congress (IEC).

Cardinal Charles Maung Bo, archbishop of Rangoon, Burma, was impressed and described their dance as a “love letter sent directly to our hearts.”

Bo urged them not to give up hope while in jail, saying that the Eucharist has always been about hope.

He asked the inmates to pray for one another, for the Catholic Church, and their loved ones waiting outside for them.

Bo then went down to the quadrangle to shake the hands of the inmates.

Bo earlier wanted to visit the prisoners of the Cebu Provincial Detention and Rehabilitation Center, which gained international prominence in 2007 when video of the inmates dancing to Michael Jackson’s “Beat It” was uploading to YouTube and went viral.

Clad in their signature orange uniform, red sneakers and white gloves, the inmates opened their 10-minute performance with Michael Jackson’s “They Don’t Care About Us.”

The dancers in front wore yellow shirts with the logo of the 51st IEC printed in front.

They wore white gloves to emphasize hand movements during their interpretation of the IEC theme song “Christ in us, our hope of glory.”

Toward the end of their performance, the inmates formed a human monogram of IHS or Iesus Hominum Salvator (Jesus, Savior of men).”

Larry Biason, 45, an exceptionally tall man with white hair, was the standout among all the dancers.

Biason was left by his parents in front of a church in Albay when he was a baby.

He lived a comfortable life in the company of priests and nuns, but was swayed by friends to do bad things during his teenaged years.

“I had been to many places since then, thinking that it would give me fulfilment. I was wrong,” he said.

In 2010, he was arrested in Barili town, Cebu, for the possession and sale of illegal drugs.

Biason then joined the famed dancing inmates when he was detained at the CPDRC.

He admitted he felt honored performing before Cardinal Bo, the papal legate of the 51st IEC.

He could not help but smile especially when the cardinal greeted them “Pit Senyor and maayong hapon (good afternoon),” after their performance.

Biason was disappointed he was not among the lucky inmates who shook the hands of Bo.

He said he would have asked the cardinal to pray for him and his fellow inmates.

“I would ask him to pray for inmates like me, whose cases haven’t progressed for so long. I pray we would be given attention,” he said.

Biason said the last hearing he attended for his drug charges was in 2013.

Choreographer Vince Rosales said the inmates had been practicing since December because they thought that they would be dancing for the IEC delegates and some balikbayans (visiting Filipinos from overseas).

They didn’t know that they would be performing for the Pope’s representative himself.

Rosales recalled that they were told by  Cebu Auxiliary Bishop Dennis Villarojo, 51st IEC secretary-general, to give them a video of their performance on Dec. 26, for viewing by Cebu Archbishop Jose Palma.

While there were official hand movements to go with the lyrics of the theme song, Rosales said he was told to incorporate the CPDRC style into their performance.

Apparently, the church officials in Cebu were happy with what they saw in the video.

A CPDRC choreographer since 2006, Rosales said he has never been happier for the inmates.

“I am so happy I was given this task by the Archdiocese of Cebu,” said Rosales.

He joked that hopefully, the complainants against them would drop the cases against them out of mercy, after seeing their performance.

The CAPA is among the religious organizations working with the CPDRC inmates.

“Since we introduced Christ to them here, it is my prayer that we can still be with them when they are finally set free,” he said.  SFM