Carpio: US to boost PH chance vs China 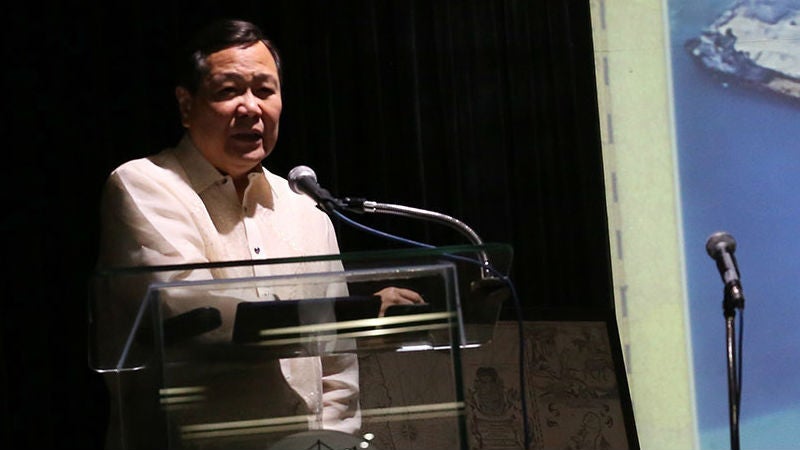 IN THE FACE of China’s “creeping invasion” in the heavily disputed South China Sea, American military presence in the Philippines would give the country “a fighting chance” in defending its territory.

Supreme Court Associate Justice Antonio Carpio made this case in voting to uphold the constitutionality of the Enhanced Defense Cooperation Agreement (Edca) between the Philippines and the United States, calling the accord essential in building a “credible defense” for the Philippines against China’s expansionist moves in the strategic waterway.

In his separate concurring opinion to the high court’s majority ruling last week, Carpio said the Edca—and its provisions allowing the prepositioning of US war materiel and equipment in Philippine military bases—would “give teeth” to the longstanding Philippine-US defense alliance at such a critical time.

He said the executive agreement would deter China from attacking Philippine boats patrolling the West Philippine Sea—waters within the Philippines’ 370-kilometer exclusive economic zone (EEZ) in the South China Sea—as had previously happened with the country’s poorly equipped military forces vulnerable to the growing Chinese might.

“With the Edca, China will think twice before attacking Philippine Navy and Coast Guard vessels patrolling the West Philippine Sea. This will give the Philippines a fighting chance to ward off China’s impending enforcement of its nine-dash-line [claim in the South China Sea],” Carpio said.

China claims nearly all of the 3.5-million-square-kilometer South China Sea, representing its stake with nine dashes on the new Chinese map to show its “national boundaries.”

Voting 10-4, the Supreme Court on Tuesday upheld the defense pact, ruling that the 2014 executive agreement between Manila and Washington no longer needs Senate concurrence, as it merely implements existing defense treaties, including the 1999 Visiting Forces Agreement (VFA) and the 1951 Mutual Defense Treaty (MDT).

The ruling junked petitioners’ claims that the agreement would pave the way for the de facto permanent basing of US forces in the Philippines 24 years after the Senate voted to get rid of US naval and air bases in Central Luzon.

The court said the Edca, as an implementing pact, may not breach the provisions of the VFA—a treaty that covers the “temporary” stationing of US military and civilian personnel in the Philippines.

Strictly, the Edca must comply with the Constitution’s “policy of freedom from nuclear weapons within Philippine territory,” the court said.

Still, the 118-page decision afforded flexibility in the enforcement of VFA provisions as far as “agreed locations” for troop stationing, prepositioning of defense materiel and equipment and operational control are concerned.

As to concerns that the Edca might be enforced beyond its intent, Chief Justice Maria Lourdes Sereno said: “We cannot invalidate the Edca on the basis of the potential abuse of its provisions.”

Carpio was one of the 10 justices who affirmed the constitutionality of the agreement, while Associate Justices Teresita Leonardo-de Castro, Arturo Brion, Estela Perlas-Bernabe and Marvic Leonen dissented.

For Carpio, who has been at the forefront of the campaign against China’s land reclamation and construction activities on Philippine-owned reefs in the Spratly archipelago, the Edca is necessary to implementing the spirit of the MDT.

“The Edca is absolutely necessary and essential to implement the purpose of the MDT, which on the part of the Philippines, given the existing situation the in West Philippine Sea, is to deter or repel any armed attack on Philippine territory or on any Philippine public vessel or aircraft operating in the West Philippine Sea,” Carpio said.

Under the MDT, the Philippines and the United States agreed to “separately and jointly by self-help and mutual aid maintain and develop their individual and collective capacity to resist armed attack.”

The agreement likewise provides that “each party recognizes that an armed attack in the Pacific area on either of the parties would be dangerous to its own peace and safety and declares that it would act to meet the common dangers in accordance with its constitutional processes.”

Carpio said throwing out the Edca for not being ratified by the Senate would, in effect, invalidate the MDT.

Carpio cited the importance of the United States as a defense ally, citing the prevailing expert opinion that “there is only one power on earth that can deter militarily China from enforcing its nine-dash-line claim.”

He underscored the import of prepositioning defense equipment, “like mobile antiship and antiaircraft missiles” in the age of modern warfare for coastal states such as the Philippines.

Emphasizing the importance of US presence in the Philippines, Carpio traced China’s flourishing presence in the South China Sea to the Pacific “power vacuum” that occurred when US military bases were booted out of Subic Naval Base and Clark Air Base in 1992.

He warned that China’s construction of artificial islands in the South China Sea showed that Beijing was turning Panganiban (Mischief), Zamora (Subi) and Kagitingan (Fiery Cross) reefs into a triangle of defense, if not aggression, with airstrips and facilities on them configured as air and naval bases.