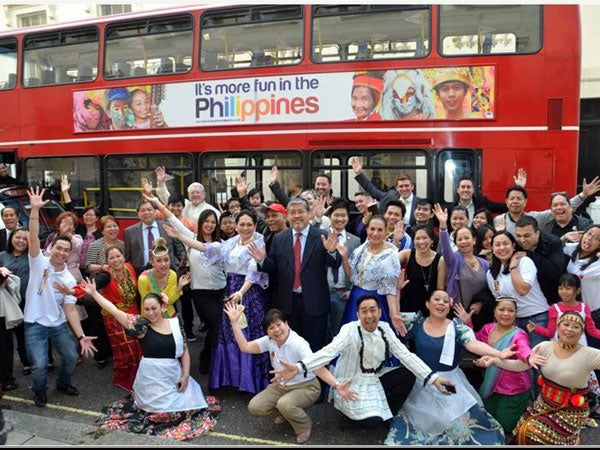 London, travel trade partners and members of the Filipino community in launching the new tourism campaign “It’s More fun in the Philippines.” Photo courtesy of Department of Foreign Affairs

DAVAO CITY, Philippines – The Department of Tourism (DOT) seeks to position the country as the world’s newest Muslim-friendly destination by giving out a host of incentives to tourism and travel establishments that will seek halal certification and turn their facilities “Muslim-friendly,” in the next 100 days.

Tourism Assistant Secretary Art Boncato has announced that under the Philippine Halal Tourism Program, DOT will cover all fees for halal accreditation and assist the establishments every step of the way if they commit to turn their facilities “Muslim-friendly” in the next 100 days.

He said that at least 40 establishments — 20 in Manila; 10 in Cebu and Boracay; and 10 in Davao — the four pilot areas identified for the Philippine Halal Tourism Program, have been targeted for halal certification by April 7, in time for the gastronomic event, “Madrid fusion” to be opened in Manila, where DOT has reserved a section for the halal showcase.

Fazal Bahardeen, chief executive officer (CEO) of the Crescent Rating, world’s leading authority on Muslim travel, said the global tourism picture showing the growing number of Muslim travelers around the world has made it important for destinations to learn about this market.

“These Muslim travelers belong to the younger set, more educated, understand fully why travel is such an important thing to do,” Boncato said.

He said the Philippines, which has not entered the list of the top 10 destinations of the Global Muslim Travel Index, has already tapped a portion of the Muslim market in the Association of Southeast Asian Nations and India, but the main concern has always been the availability of halal-accredited and other Muslim-friendly facilities.

“In 2014, we only had some travelers coming from India and the Asean,” Boncato said.

“But their dietary concerns, especially India and Israel, can be addressed by halal industry,” he said.

“We want to double and triple these arrivals, and because halal tourism market is also a growing market globally, we want to give opportunities with stakeholders in the tourism sector to tap into this market,” Boncato added.

“The Philippine halal tourism project aims to make the Philippines the newest Muslim-friendly destination,” he said. “That’s very easy to say, but very difficult to do because it means we have to make halal food available to Muslim visitors by increasing the number of halal-accredited establishments in the country, from north to south.”

Boncato said the DOT decided to pilot halal certification in Manila as the main market; Cebu, as the secondary one; Boracay, as the most popular among foreign tourists; and Davao, as the most successful destination in the heart of Mindanao.

“The whole (halal-accreditation) project is expected to be done by April this year,” he said. “The final inspection (of properties targeted for halal accreditation) will be by April 7, so that we will be able to announce it in time for the Madrid Fusion.”

Boncato said that the Madrid Fusion hosted by Manila last year and this year, has become one of the biggest gastronomic fairs in the world. Almost all the number one chefs around the world will be flying to Manila for the event, according to him.

“The DOT plans to put up a special halal section for the event,” Boncato said.

“We will invest heavily in an information campaign on the Philippines as a Muslim-friendly destination and we will position your properties as main property in the Philippines supporting halal tourism,” Boncato said as he urged tourism establishments to take part in the program.

Aside from Crescent Ratings, the DOT also partnered with the Halal International Chamber of Commerce and Industries of the Philippines (HICCIP) for the project.  SFM