Naval base on Palawan’s Oyster Bay being developed 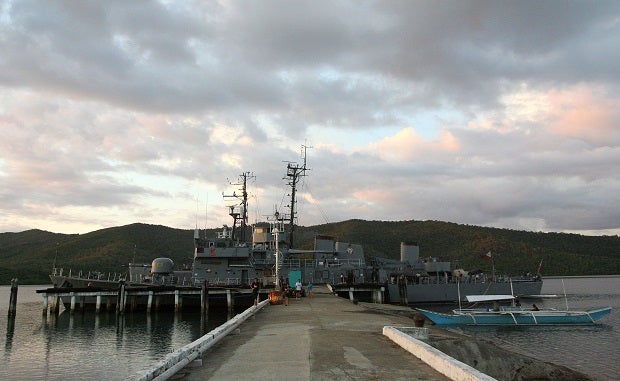 Oyster Bay Palawan- Philippine Navy Vessels are scattered around the Oyster Bay and Ulugan Bay fronting the West Philippine sea, and is being deveopled as a “mini Subic” where the country’s two former U.S. Coast Guard cutters would be based. Oyster Bay is only 160 km (100 miles) from the disputed Spratly islands, where China has been reclaiming a reef known as Johnson South Reef, and building what appears to be an airstrip on it.
INQUIRER FILE PHOTO/ MARIANNE BERMUDEZ

PUERTO PRINCESA CITY—If there are efforts to develop a new military base in Palawan that can host US troops, no confirmation is coming from local military and civilian officials here.

But the development of an existing naval facility located on Oyster Bay, acknowledged to be the most suitable to host US troops, is quietly going on, aimed at what Philippine Navy officials have described as creating a “mini Subic” in Palawan.

Subic is a former US naval base in Zambales province. It was shuttered together with Clark Air Base in Pampanga province in 1992 after the Senate voted to terminate the US-Philippine Military Bases Agreement.

Located on the edge of the primary forest reservation facing the South China Sea, the Naval Forces West (Navforwest) facility on Oyster Bay is close to the islands and reefs that the Philippines, Vietnam, Brunei, Malaysia, China and Taiwan are disputing.

Previously accessible only by sea from the pier of its local host community, Puerto Princesa’s northern village of Macarascas, Oyster Bay will soon be linked to the urban center by a highway now under construction.

Work on the 12-kilometer access road is being undertaken by the Department of Public Works and Highways (DPWH) for Navforwest.

“The purpose of this road is for easy access of our troops from Oyster Bay to Puerto Princesa, transporting materials for construction of new barracks for our troops and accessibility of Navy ships,” Lt. Ariesh Climacosa, spokesperson for Navforwest, told the Inquirer.

The road is expected to be completed in October. By then, the base would be less than an hour’s drive from Puerto Princesa.

Some local officials, however, have complained of the “haste” by which the road project was started.

Community Environment and Natural Resources (Cenro) officer Emer Garraez said the project proponent had been cited for bypassing the agency in seeking permits.

He explained that the project required the clearing of primary forest vegetation to make way for the road.

“They started it without a tree-cutting permit,” Garraez said.

The project, however, received endorsement and approval of the Palawan Council for Sustainable Development (PCSD) when the matter was taken up late last year.

In the fishing village of Macarascas, the present jump-off point to Oyster Bay and host of the main headquarters of the Western Command’s naval arm, the residents are waiting for the arrival of the Americans.

“There used to be opposition to the naval base here, but now the people are used to the presence of the military,” said Sebastian Labrador, barangay captain of Macarascas.

The move to develop the Oyster Bay naval base into a modern naval facility started in 2014. The base was the Philippine Navy’s sole shipyard facing the South China Sea, but it was rundown and starting to surrender to the elements.

Nestled among old-growth mangrove forests and limestone cliffs on the western flank of Palawan’s central region, Oyster Bay is the Philippine Navy’s staging point to the Kalayaan Islands in the disputed Spratly archipelago.

The Oyster Bay development plans came as tensions were increasing between the Philippines and China over China’s aggressive assertion of ownership of almost the entire South China Sea, including waters within the Philippines’ 370-km exclusive economic zone known as West Philippine Sea.

The new infrastructure components, including the 12-km access road from the mainland, were described by Commodore Joseph Rostum Peña, the then Navforwest commander, as “capability upgrade.”

Once completed, the facility will have a new wharf that could accommodate as many as four large naval vessels, according to Navy officials.

But even then, Peña and other Navforwest officials avoided discussion of the South China Sea dispute.

Peña said at the time that part of Navforwest’s capability upgrade would come from the Armed Forces of the Philippines’ modernization program. The upgrade would include installation of high-powered radar systems in strategic areas from north to south of Palawan facing the South China Sea, he said.

The radar systems would allow Navforwest to closely monitor developments in the disputed areas of the Spratlys, he said.

“The coastal watch program should allow us eventually to monitor our seas in real time,” Peña had said.

Once completed, Oyster Bay would be “a mini Subic,” he said.

Like the former US naval base in Zambales, Oyster Bay has physical characteristics ideal for hosting large warships. “It is also ideal as a base for our Marines. It has vast jungles suitable for training,” Peña had said.

He was mum, however, on the suitability of Oyster Bay for use by US naval ships, saying only that the facility would be “suitable for large warships.”

In May last year, then Armed Forces Chief of Staff Gen. Gregorio Catapang was quoted by Reuters as saying that it was the AFP’s top priority to build a naval base on the country’s western coastline, opposite the disputed Spratly archipelago.

According to Reuters, Catapang said American, Japanese and Vietnamese naval vessels would be allowed to make port calls once the facility at Oyster Bay was completed.

Catapang said P800 million was needed for the initial development of Oyster Bay and P5 billion to turn it into a major operating base.