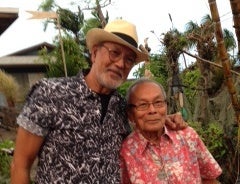 Angel Ramos—small, articulate and incredibly animated at 87—wears a thin disc of hammered metal on a string around his neck. It says “Kahuku,” and has the number 809 engraved on it.

“This is my bango—that’s Japanese for ‘number.’  For all plantation workers, pineapple or sugar, this was our employment number for all time,” says this sakada (migrant Filipino worker) hired in Hawaii in 1946.

He chuckles, giving a glimpse of the naughty kid he must have been once. “Hey, you know, you didn’t need Mastercard, you could use this to charge,” he adds.

But suddenly, Ramos turns serious, almost on the verge of tears. “Why do I still wear it? It’s like going to church, where I wear my cross … I’ve been looking and looking for my wife’s wedding ring—she died in August 2014—and my kids say we will buy a new one, but it’s different, you know. That ring cost $21.50. A $3,000 ring? That’s BS. This—this is my identity.”

It is an identity finally given due honor at the very first celebration of Sakada Day in Hawaii on Dec. 20, 2015, at the Hawaii State Capitol Auditorium in Honolulu. The celebration was made official via House Bill No. 604, approved on April 9, 2015, by Hawaii’s House of Representatives, through the efforts of Philippine Consul General to Hawaii Gina Jamoralin and the vice speaker of Hawaii’s House of Representatives, John Mizuno.

To commemorate the occasion, Rep. Eric Singson of the second district of Ilocos Sur province, birthplace of most of the first sakada, had commissioned a painting by National Artist for Visual Arts Benedicto “BenCab” Cabrera, who instead donated the work to the Philippine government during the event.

The original sakada, migrant Filipino workers recruited as mass labor by the Hawaiian Sugar Planters’ Association in the 1920s to work on expanding sugar and pineapple plantations, didn’t have it easy.

“Life for them would be much more than solitude,” wrote Dr. Belinda Aquino, of the Center for Philippine Studies at University of Hawaii in Manoa, in “The Filipino Century in Hawaii: Out of the Crucible,” a paper published in the souvenir program for the sakada’s centennial celebration in 2006.

“Ten- to 12-hour days of backbreaking work in the cane fields under a searing sun, a miserable dollar-a-day wage, homelessness, rootlessness, isolation, loneliness, vulnerability to the luna’s (supervisor) wrath, suffering and other human hardships would be the essence of their existence.”

Ramos confirms the memory. “The old-timers told us, ‘You guys are lucky. If you had come in the 1920s, it was dirt in your face, lunas (supervisors) kicking your ass.’”

Indeed, by the time the 6,000 sakada recruited in 1946, had arrived, Hawaii—and the world—was a different place.

“The ’46 sakada arrived in the midst of new economic realities in postwar Hawaii,” wrote scholar Steffi San Buenaventura in the paper “Hawaii’s 1946 sakada” in “Social Process in Hawaii,” 1996.

Instead of employers having “total and unchallenged control” over the workers, there was now “a new order—organized labor, which carried their collective interest and the authority to negotiate their wages and conditions of work.”

Employers of the 1920s who had once insisted on illiterate laborers now had to contend with “members of this group [who] had more years of schooling (including a college education) … [M]any who worked the fields moved up to skilled and clerical positions,” wrote San Buenaventura.

“When we came to Hawaii, the labor climate was just grand,” says Ramos. “Our relationship with the Japanese was beautiful, we never heard anybody say they thought we would retaliate for what happened during the war. The big union guys said, do it this way, do it together, never mind the ethnic groups.”

After his wife Rose died last year, Angel Ramos now lives alone with his cat in an airy wooden house in Kahuku, about an hour and a half from Honolulu, on the island of Oahu.

The couple has 13 children, “all healthy, all good,” Ramos says. “We call them plantation babies because they were all born on the plantation.”

He’s proud of the eight boys and five girls he raised on a Spartan lifestyle, who all worked their way through college. “I never gave them five cents for college. They never got presents from me. I’m a guy who doesn’t know how to plan. But they all turned out OK. People ask, did you teach them by example? No—we just did our thing.”

Today, Ramos’ children live all over Hawaii and the US mainland, and at least one of them visits every day. They’ve recently bought him a wheelchair and ordered him to stop driving. “I can’t fight them,” he says with resignation. “They have leverage.”

But back when he was much younger, Ramos had treated life as an adventure of sorts, including the job in Hawaii. Not that it was uncharted territory: his father had gone there, worked, and returned home, while an uncle had settled there.

He was then 17, and a high school sophomore who did well in school.  His father built machines in Vintar, Ilocos Norte province, but he had never worked in his life, Ramos confesses.

One day, some boys who had been recruited for the trip came to their house, and Ramos found himself faking his own papers on a manual typewriter, as he was underage. “I said, ‘Mom, I’m going to Hawaii.’ [My parents] never said a word; they were confident I’d be fine. I just went with the tide.”

(It would be 24 years before Ramos would come home to visit, in 1970, and by then, sadly, his father was senile and didn’t recognize him. “Lakay, do you know this guy? It’s your son, Angel,” people kidded the old man, Ramos recounts. His father’s response: “If you say so.”)

The boys took off from Port Salomangue in Ilocos Sur for Hawaii aboard the ship Maunawili; Ramos remembers his sturdy rattan suitcase, more durable than the wrapped blankets, cartons and woven bags his companions carried.

He was in the third batch of 1946 sakada, he recalls, which was supposed to have left on April 1, but was delayed by news of a tsunami that hit Hawaii. “We didn’t even know what a tsunami was,” he recalls. San Buenaventura records the third batch’s departure as April 11.

It was an uneventful trip, although he remembers relieving himself in a shallow canal that drained off the boat, while his companions had to content themselves with bathing in saltwater.

When they got to Hawaii after 17 days, they were instructed to look for their names on lists posted on the sides of military trucks parked near the port. “They told us to make sure we got on the right trucks, but I was too busy looking for wahine (girls),” Ramos says with a laugh. In fact, one companion was so determined to ogle the women, he actually cut a window in the packed truck’s canvas walls with a pocket knife.

Ramos was assigned to the Libby, McNeill and Libby pineapple plantation in Maui, but the men were first brought to a restaurant and fed fried egg and rice; some of them threw up from seasickness at the smell of the food. Then they were brought to the barracks, wooden huts set up in fields, and were told to be ready in the morning, when the truck would pick them up again.

Ramos’ first job was cutting grass, then picking pineapples. “They gave us bags, and we had to fill them up and put them by the roadside … I didn’t even know how much I was making.” He estimates it was about 52 cents an hour, a little better than in the sugar plantations.

Eventually, Ramos recalls, the luna made him camp boss—a job that consisted mainly of reporting any problems to management, and turning the new diesel burner for hot water on and off every day. “I got lucky, because I was the smallest. But I knew how to push a pencil, I was schooled, so they knew that.”

After nine months in Maui, however, Ramos and a colleague ran away and made it to Oahu, where he worked at various jobs in Honolulu. He also met Marcelina, aka Rose, and got her pregnant.

“Hala, buntis! At that time, there was no such thing as cohabitation, and you could end up in the calaboose. But everyone respected my uncle, so nothing happened. She went to stay with my uncle like my own family, although I probably didn’t even get to talk to her until we were married. My first child was born out of wedlock on Oct. 16, 1948.”

By the following year, Ramos was working as a laboratory analyst in a sugar plantation in Kahuku. He had also become an active member of the powerful International Longshoremen and Warehousemen Union (Ilwu). “Each plantation had a unit, and I was an officer of our unit until the end. We worked [among] the grassroots.”

Eventually Ramos made it to the coveted position of journeyman, the top job at the plantation hierarchy. “It’s like being a licensed doctor; you can’t go any higher.”

Nowadays, Ramos’ main thing is his plants; the front yard of the 26-year-old Kahuku house is positively overrun with beautiful greens, including exotic palms, a large African malunggay tree, a species of sugarcane, and his prized succulents.

“It’s only now that I am up on my feet again after 12 days; my foot was swollen. I had to retrieve my wife’s walker which I almost threw away two weeks ago.”

Ramos was however well enough to pose with BenCab, who had managed to sketch the old man despite his frenzied gesticulations and changing expressions.

Asked how he has stayed so healthy, he says: “I just do my thing. I don’t worry about nothing. I’m at peace.” He points upward again. “You want me now? It’s OK with me.”

It has been a life without regrets, Ramos concludes. “We were reminiscing the other day, and I said, there’s nobody like my wife Rose, nobody has DNA like her. Life here in Hawaii has been beauuuutiful—my kids are so beauuuutiful.”

Is he more American or Filipino? Ramos looks genuinely puzzled. “What is American, what is Filipino? I was born Filipino, I have allegiance to America, I am Hawaiian. That’s it. The most Filipino part of me? I eat the same vegetables—I love malunggay.”

Remembering the Sakada Story in Hawaii

Filipinos in Maui mark sakadas’ arrival in Hawaii 110 years ago