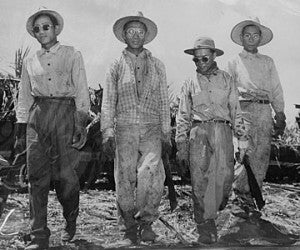 HONOLULU – Before an overflow crowd at the Capitol here, Governor Y. Ige signed HB604, which establishes December 20 of each year as “Sakada Day” in Hawaii in recognition of the Filipino community’s contributions to the history, economy, culture and heritage of the state.

Rep. John Mizuno (Kalihi Valley, Kamehameha Heights, Lower Kalihi) with 18 other legislators had introduced the bill at the urging of Consul General Gina Jamoralin of the Philippine Consulate General in Honolulu.

The sakadas, or Filipino plantation workers, were the first Filipinos to arrive in Honolulu aboard the S.S. Doric more than 100 years ago on December 20, 1906, to work as contract laborers in the plantation industry.  About 120,000 sakadas arrived in Hawaii between 1906 and 1934.

These sakadas paved the way for the legacy that would be built by the Filipino community in Hawaii and worldwide. Today, Filipinos make up the second largest ethnic group in the state, with Filipinos in leadership positions in business, government, community service organizations and the professions.

“Like many moments in history, the arrival of the first 15 sakadas in Hawaii occurred little noticed by most in Hawaii at the time,” said Mizuno.  “However, after viewing their struggles and sacrifices we are honored to recognize the first migration of Filipinos in Hawaii and the sakadas that followed as we appreciate their historic importance and significance to shaping Hawaii.”

Mizuno added, “Today Filipinos have achieved significant success worldwide, however in moving forward it is important to remember the great pioneers who paved the way which allowed for such success to occur. After reviewing the legacy of the sakada we truly begin to understand all that it represents and means to all of us in the state.”

Consul General Jamoralin thanked the state’s leaders: “On behalf of the Philippine government and the Filipino community in Hawaii, I want to express my deepest thanks to Governor Ige and the members of the Hawaii State Legislature for this great gift for the Filipino people.”

She said further, “I hope this milestone act, honoring the arrival of the first 15 sakadas in Hawaii will inspire future generations of Filipinos to take pride in their heritage.”