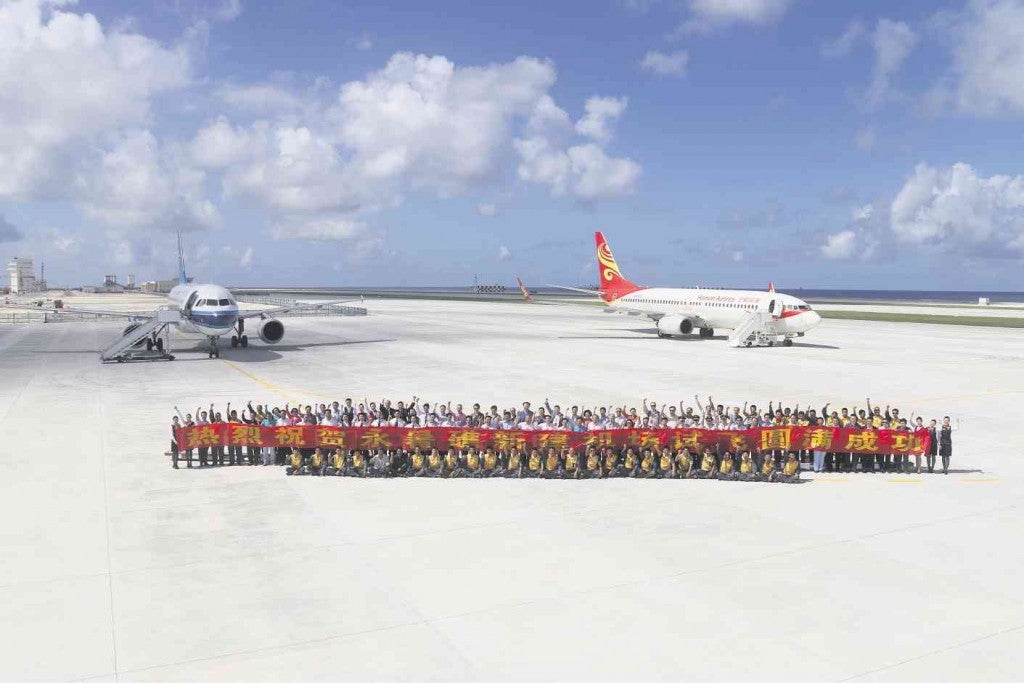 COMMERCIAL PLANES LANDONKAGITINGAN Passengers and crew of a Hainan Airlines plane and a China SouthernAirlines plane pose for a souvenir photo on Kagitingan (Fiery Cross) Reef in the Spratlys that China has transformed into an airfield. The ChinaDaily newspaper said the two planes made the two-hour flight to the reef from Hainan province on Jan. 6. XINHUA/AP

China has nearly completed construction of a runway and other facilities on Panganiban Reef, on the Philippine side of the Spratly archipelago in the heavily disputed South China Sea, a US-based think tank reported on Saturday.

Also known as Mischief Reef, Panganiban Reef is 216 kilometers west of Palawan, well within the Philippines’ 370-km exclusive economic zone recognized under the United Nations Convention on the Law of the Sea.

China is also rapidly completing construction of a runway and other facilities on Zamora Reef (Subi Reef), also part of Philippine territory in the Spratlys.

Zamora Reef is 23.4 km away from Pag-asa Island (Thitu Island), a small municipality in Palawan province that is home to a small civilian population.

The Asia Maritime Transparency Initiative (Amti) released its latest report on the developments in the Spratlys on Friday, complete with satellite images that show in detail China’s swift construction undertaken in less than six months.

“Mischief Reef sits just [37.8 km] from the BRP Sierra Madre, which was deliberately grounded by the Philippines at Second Thomas Shoal (Ayungin Shoal) in 1999 and is home to a contingent of Philippine Marines,” the Amti report said.

“China has maintained a constant coast guard presence around Second Thomas since 2013 and attempted to prevent resupply of the Sierra Madre in March 2014. Mischief is also about [108 km] from Reed Bank (Recto Bank), where the Philippines hopes to drill for natural gas deposits over China’s objections,” it added.

“This strategic location combined with its size (China has reclaimed twice as much land at Mischief Reef as it did at Fiery Cross [Kagitingan Reef] and about 50 percent more than at Subi) makes developments at Mischief of particular concern for the Philippines,” Amti said.

Security expert Chester Cabalza of the National Defense College of the Philippines (NDCP) described the progress of China’s work on Panganiban and Zamora reefs as “alarming.”

“China has become [daring]. They have completed their construction, so what’s next?” Cabalza told the Inquirer by phone.

Cabalza said China was actually “challenging the international community” with its expansive construction activities on the disputed areas in the Spratlys.

“China wants to let the international community know that ‘This is ours,’” he said.

Cabalza said China had been able to follow the timeline it set for staking claim to nearly 90 percent of the South China Sea, through which $5 trillion in global trade passes every year.

“The next step is to totally claim what they say is theirs. They know how the international community, especially the US, Japan and India, would react,” Cabalza said. 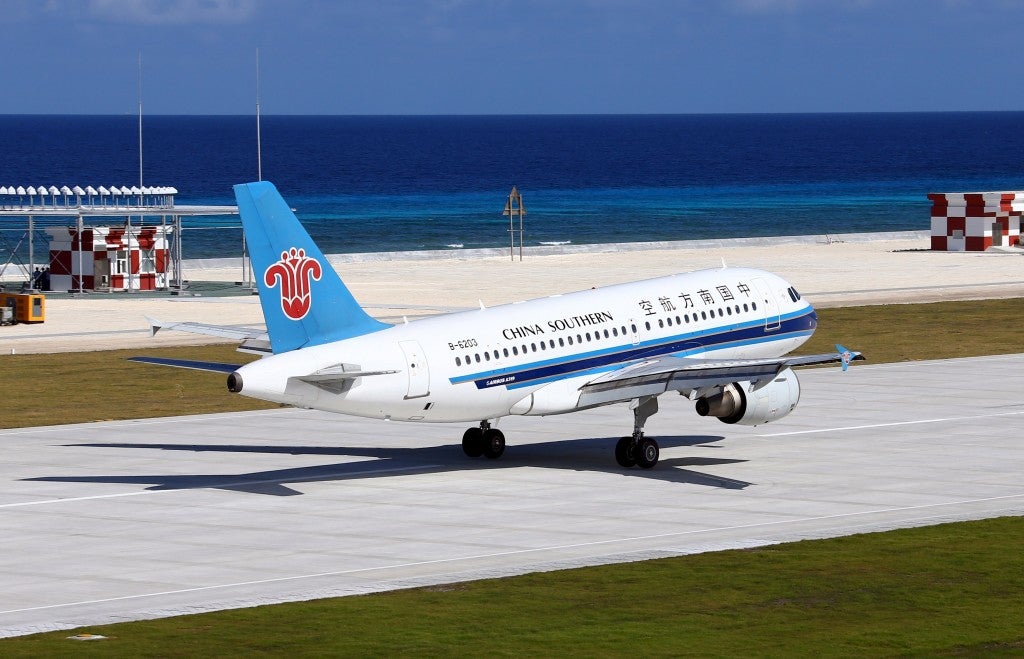 In this Wednesday, Jan. 6, 2016 file photo released by China’s Xinhua News Agency, a China Southern Airlines jetliner lands at the airfield on Fiery Cross Reef, known as Yongshu Reef in Chinese, in the Spratly Islands, known as Nansha Islands in Chinese, of the South China Sea. An official says Philippine and U.S. foreign and defense chiefs will discuss new security concerns arising from China’s completion of artificial islands in the disputed South China Sea, on Tuesday, Jan. 12 in Washington. AP

On Friday, China announced that it would invite private investment to build infrastructure on the artificial islands it had built in the South China Sea and that it would launch flights to one of them this year, moves likely to anger the Philippines and the other claimants to territory in the strategic waterway.

Besides the Philippines, Vietnam, Brunei, Malaysia and Taiwan also has claims in the South China Sea.

The Philippines controlled Panganiban Reef until 1995 when China seized it and put up structures on stilts there, supposedly to provide shelter for its fishermen. It has controlled the reef since then.

The Philippines responded by grounding the BRP Sierra Madre, a rusting naval hospital ship, on Ayungin Shoal in 1999.

China rejected the Philippine protest, saying it had “undisputed sovereignty” over the South China Sea, where islands, reefs and atolls are believed to be sitting on vast energy reserves.

On Jan. 6, China landed two test flights on the 3,125-meter-long runway on Kagitingan Reef, a follow-up to the Jan. 2 landing that prompted a protest from Vietnam, which also claims the reef, and drew sharp criticism from the United States.

Foreign Secretary Albert del Rosario said China’s flights to the Spratlys should be challenged, as it might next impose an air defense identification zone above the contested region similar to the air exclusion zone it had declared in the East China Sea, where it is locked in dispute with Japan over ownership of five uninhabited islands.

The United States urged China to stop land reclamation and militarization in the Spratlys and Britain declared that freedom of navigation and overflight in the area were nonnegotiable.

Amti said only four months after it released images of China’s completed construction of its first Spratly airstrip on Kagitingan Reef, “China has not only landed three civilian test flights on Fiery Cross, but is progressing even faster than expected with its work at Subi and especially Mischief.”

The think tank observed that if construction of the Kagitingan airstrip took “at least seven months from the start of grading,” China’s work at Zamora is taking at least six months.

On Panganiban Reef, grading began in September or October, and Amti said that “construction is already approaching completion just three to four months later … considerably faster than (its work) on Fiery Cross or Subi.”

“A fully formed and compacted sand runway could be seen by Oct. 19, and by Dec. 5 the runway and apron had been covered with gravel and about [150 meters] of concrete. As of Jan. 8, concrete covered most of the runway, which appears to be nearing completion,” Amti said, describing the work on Panganiban Reef.

Satellite images show that as of Jan. 8, the northwest side of Panganiban Reef already has a 570-m-long seawall, housing facilities, artificial turf parade grounds, cement plants and docks.

China has also constructed a seawall and completed a dock on the artificial island it has built on the southern end of Panganiban Reef.

Zamora Reef, which can be seen from Pagasa Island, now has an “octagonal tower with a conical feature at its top” measuring 27 to 30 m high and 12 m on each side, Amti said.

Construction of the tower, located on the northeast side of Zamora Reef, was almost complete as of Jan. 8.

“A seawall and docks have been constructed, and work continues on a number of hardened buildings,” Amti said.

Also as of Jan. 8,  the “southern end of the runway” on Zamora Reef “had been paved with concrete as had most of the runway and apron at the northern end, while the gravel base had been completed and concrete strips were visible in the central portion,” Amti said.

Cabalza said the Philippines “reacted with grace” when it pursued the legal and diplomatic track in responding to China’s expansionism in the South China Sea.

But the Aquino administration is also pushing for joint patrols with the United States in the South China Sea through the Enhanced Defense Cooperation Agreement (Edca), which the Supreme Court declared constitutional last week.

The Edca is seen as a deterrent to China’s aggression as the Philippine and US militaries could conduct joint patrols in the South China Sea, although Manila and Washington stress that the agreement will greatly contribute to faster humanitarian assistance and disaster response.

In a speech at the East-West Center Association International Conference held at Manila Hotel on Friday, President Aquino said the “basic logic behind” the Edca was “interoperability” between the Philippine and the US militaries.

“Anybody who is reasonable will see that this agreement is an enhancement of both our countries’ abilities, rather than a threat to anyone else,” the President said.

“To my mind, the Edca has a very practical purpose for developing our own armed forces: All the modern hardware carries a significant price tag; yet with the Edca, we have a chance to try the cutting-edge equipment and see just how suitable they are to our needs, without having to buy them first … On the reverse side, the US gets to learn how to make do with fewer resources, which in a conflict situation is always a high probability if not an intense possibility,” the President said.