Limousine in fire that killed Filipina nurse in US recalled 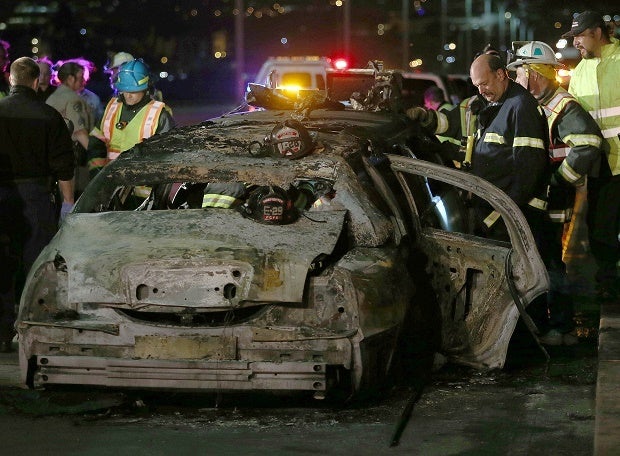 In this May 4, 2013 file photo, San Mateo County firefighters and California Highway Patrol personnel investigate the scene of a limousine fire that killed five passengers in Foster City, California. On Wednesday, Jan. 13, 2016, Accubuilt, a specialty car manufacturer, announced it is recalling the limousine model involved in the 2013 fire. AP

SAN FRANCISCO, United States — A specialty car manufacturer is recalling the limousine model involved in a 2013 fire that killed a Filipina nurse and four companions on a San Francisco Bay Area bridge.

Accubuilt is recalling about 1,000 limousines manufactured between Jan. 2, 1998, and July 21, 2005, because a rubbing driveshaft may increase the risk of fire. It’s unclear if the recall is a result of the California fire in a 1999 Lincoln Town Car limo.

READ: Body of Filipina killed in US limo fire to undergo forensic probe in US

A representative of the Lima, Ohio-based company did not return a call for comment Wednesday.

The California Highway Patrol said the blaze broke out on the San Mateo-Hayward Bridge because of a catastrophic failure of the rear suspension system. Authorities said the air suspension failure allowed the spinning driveshaft to contact the floor pan, causing friction that ignited carpets and set the limo on fire. No charges were filed.

The fire occurred while a nurse, Neriza Fojas, was celebrating her recent wedding with a group of friends. She was among the five killed. Four other friends inside the limo and the limo driver survived.

The state Public Utilities Commission had authorized the vehicle to carry eight or fewer passengers, but it had nine on the night of the fire. The commission fined the limo operator $1,500 for having more passengers than allowed.

Aerial video of the aftermath showed the fire scorched parts of the rear of the limousine. The car’s taillights and bumper were gone, and it appeared to be resting on its rims. The remainder of the vehicle didn’t appear to be damaged.