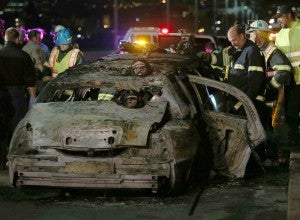 A limousine in which a Filipino bride and four friends died when it erupted in flames was carrying more passengers than its normal limit, an official and reports said Monday. AP FILE PHOTO

BAGUIO CITY, Philippines — Her wedding gown and those of her entourage by a local designer are almost done.

She was actually due for a fitting upon her scheduled return next month in her Camiling hometown in Tarlac.

But there will not be any wedding.

Instead, parents of Neriza Fojas, who was killed on Saturday, together with four of her friends in a limousine fire in California, are expecting her ashes to be carried by son-in-law Carlo Moya.

This will not happen any time soon.

Sounding tired, Carlito Fojas said in a telephone interview his daughter’s remains would first have to undergo forensic examination along with four other bodies that were recovered from the gutted limousine.

He said his daughter was scheduled to return to the Philippines on June 7 with Moya for their church wedding on June 19. Prenuptial requirements by the Catholic Church, including counseling and seminars, made them decide to fly home earlier on June 2, he said. (They were married in civil rites in the US and her night out with friends to celebrate her civil wedding turned tragic when the limousine caught fire.)

Preparations for the wedding were halfway done. “This was also why they needed to fly in earlier,” he said.

Neriza is the youngest of Fojas’ three children. His eldest daughter, Rosalyn, is based in Hawaii.

Rosalyn, who is pregnant, may not be able to return home with Neriza’s ashes, so only Carlo and his sibling are being expected by Neriza’s relatives in Tarlac, according to Carlito.

To date, he said the family in Tarlac had yet to receive a report on the fatal fire.

No US official had yet gotten in touch with the family.

“Carlo is handling all arrangements. He is up to his wits’ end because of the tragedy,” he said.

Carlito said he and his wife Sonia had received several calls from friends and relatives in the United States, but not one of them would tell them directly what had happened.

“My wife and I realized something bad must have happened because they were calling at a very odd hour in the US,” he told the Philippine Daily Inquirer.

“But when we called back, they asked us to talk instead with Rosalyn. We called Hawaii but she would not pick up the phone so we asked another relative to check on Rosalyn. Then we finally learned about the accident,” he said.

Neriza worked at the Community Regional Medical Center, which issued a statement online condoling with her family and that of another Filipino nurse who was killed in the accident, Michelle Estrera.

“It is with great sadness that we learned two of our Community Regional family members have passed away in a tragic limousine fire late Saturday night in the San Francisco area. Both nurses worked on 2East/2Central trauma medical/surgical floor one on the day shift and one on the night shift. Neriza Fojas and Michelle Estrera were exemplary nurses who dedicated their lives to helping others.

“These two outstanding nurses were loved by their patients, colleagues and staff at our hospital. Both were good friends, stellar nurses and excellent mentors who served as preceptors to new nurses.”