Binay’s vow: No Filipino will be forced to work abroad 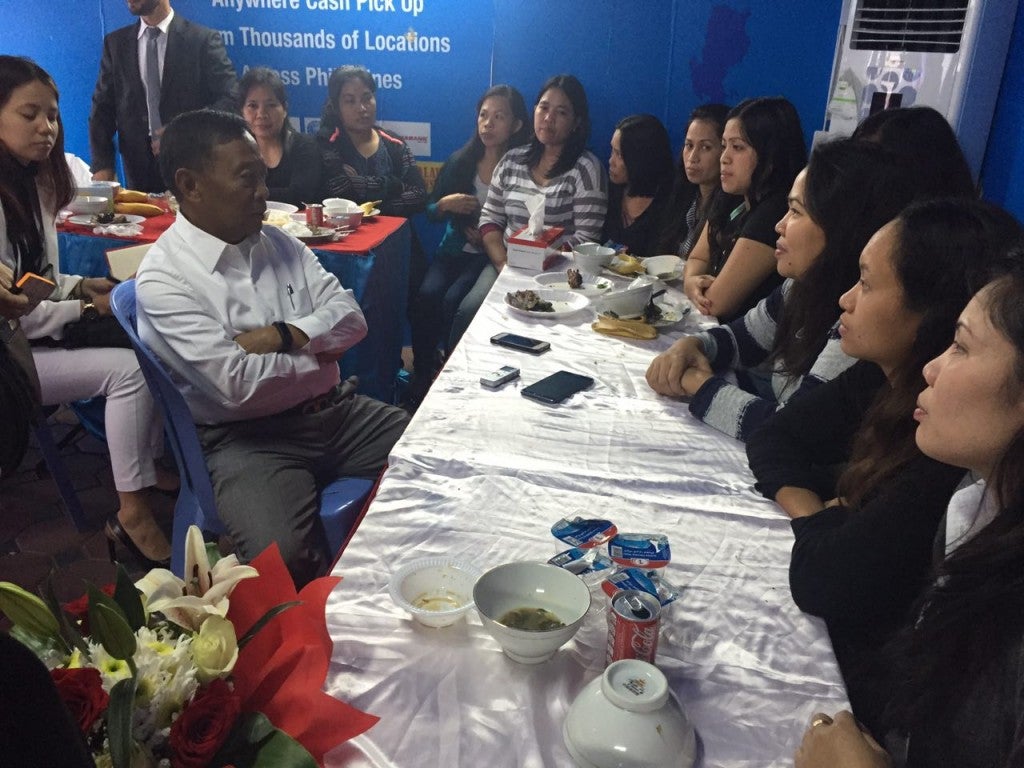 Vice President Jejomar C. Binay shares a meal with 39 Overseas Filipino Workers (OFWs) sheltered at the Labor Center at the Philippine Embassy in Abu Dhabi. The Vice President discussed the status of their cases and vowed to provide assistance to facilitate their return to the country. Photo from OVP

Working abroad will become “a matter of choice and not necessity” was how Vice President Jejomar Binay assured overseas Filipino workers (OFWs) if elected president in the 2016 elections.

Binay was in a three-day visit to the United Arab Emirates (UAE), which started on Tuesday, to strengthen bilateral ties with Middle East countries, home to over 2.7 million OFWs.

Binay said that this will be achieved by his projected administration by providing more jobs in the Philippines.

(It’s hard to top the kind of love you offer everyday. Your battle against depression and homesickness, the difficulty of working abroad, and the fear of being in a foreign land—these are some of the challenges OFWs encounter everyday.)

He said he envisioned OFWs to “come home to a progressive and caring country that can support Filipinos’ aspirations of a good life.”

(I envision a country that will take care of you and protect you. Let us work together to form a society where people will not be forced to work abroad so they can gain comfort.)

(I am confident that you will be able to come home to a developed and compassionate Philippines—where you can attain a comfortable life in our own country with all the Filipino people you love.)

Binay was a former Presidential Adviser for OFW Concerns under the Aquino administration.

The vice president reiterated his proposal to create a special government office that will help families whose OFW relatives are facing “blood money” cases.

In a statement on Wednesday, the vice president said the meeting was “very warm and cordial.”

“The meeting was a surprise, we were told only this (Tuesday) morning. It wasn’t part of the schedule. But it’s a good opportunity,” Binay said.

“Sheikh Mohammad said he would very much like to visit the Philippines in the future,” the vice president added.

He said they also discussed potential investment opportunities in areas of power and infrastructure in the Philippines.

He also had lunch with 39 wards of the Philippine Labor Office, among them victims of maltreatment and human trafficking.

He promised to provide assistance to facilitate their return to the country.

He asked Senator Nancy Binay, who is part of the delegation, to look into the possibility of extending help even to undocumented Filipino workers by setting up a special assistance fund.

“We are urging VP Binay to consider having a side trip here in Riyadh, Jeddah, and Al Khobar,  all in Saudi Arabia, so that he too can personally hear the appeal of the hundreds of distressed and stranded OFWs staying at various Filipino Workers Resource Centers (FWRCs) or Bahay Kalinga,” said M-ME regional coordinator John Leonard Monterona.

Monterona said there are about a hundred distressed female OFWs at the Bahay Kalinga in Riyadh, while about 60 male OFWs are stranded at a rented shelter in Exit 8, Riyadh.

Most of them have been victims of labor malpractices, and physical and sexual abuse, he said.

The migrant leader said the distressed and stranded OFWs have long been pleading for the Philippine government’s assistance.

“One of the stranded OFWs at Riyadh’s Bahay Kalinga is Fahima Alagasi Palacasi who was allegedly scalded by the mother of her employer. Since then, she is still staying at the Bahay Kalinga for more than 2 years,” Monterona said.

Monterona said Palacasi wanted to convey to Binay her plea for her to repatriated so that she can be with her two kids in Mindanao and start working again to support her kids.

He said Palacasi was still awaiting the outcome of the cases she filed and the counter-case filed by the mother of her employer which she said is taking so long.

“We call on VP Binay to come here in Saudi Arabia since he is already in the UAE. He often visited Saudi Arabia in previous years. This time not as a presidential candidate but in his capacity as PH vice president or maybe as an OFW advocate,” Monterona said. IDL