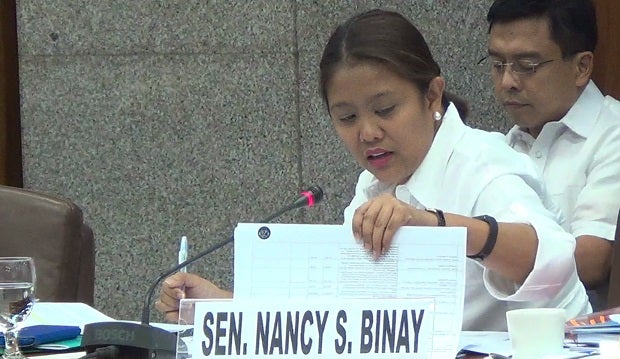 Senator Nancy Binay believes that the Bureau of Customs’ (BoC) plan to open all “balikbayan” boxes entering the country had the “imprimatur” of Malacañang.

Amid strong protest, President Benigno Aquino III on Monday night ordered the BoC to refrain from opening the “balikbayan” boxes, except when the boxes pose a threat to public safety.

Despite this, Binay still wanted to know who gave BoC chief Alberto Lina, the instruction to open them in the first place.

She believes that Lina’s action had the imprimatur of Malacanang and the Customs chief was just following instructions of his superiors.

“Chairman Lina is a good soldier and may just be following orders from his bosses. Matagal nang pinag-iinitan ng Palasyo ang OFWs (overseas Filipino workers) (Malacañang has long been targeting OFWs). It can be recalled that at the height of the ‘zero remittance’ call of OFWs two years ago, presidential spokesman Edwin Lacierda said that the government does not gain anything from them,” Binay said in a statement on Tuesday.

(Are OFWs are no longer accorded legal assistance and support, yet the Administration has the gall to burden them because supposedly, the government does not gain from the remittances of our fellow Filipinos sacrificing abroad.)

Binay was  among the senators who are seeking a Senate inquiry into the BoC’s move, saying  it was necessary to determine “whether the new policy of the BoC is in accordance with law, not unduly burdensome to OFWs and not in violation of the rights and privileges of OFWs.”

The senator also noted that there are some policies that are anti-OFWs like the collection of the P550.00 terminal fee at the Ninoy Aquino International Airport (NAIA), which the amended Migrant Workers Act exempts them from paying.

“The terminal fee is integrated into the airline tickets which the OFW can collect when he goes home after the end of his contract,” she said.

Another example, she said, is the low budget allocation to the Department of Foreign Affairs’ (DFA) legal assistance fund, which is used to provide legal support to OFWs needing it.

Binay also wants the BoC to present studies to justify the issuance of its policy in opening OFW balikbayan boxes for inspection.

(Do they have studies to back up their plan? Let’s assume there is an illegal modus, but why would someone include in their “balikbayan” package a Rolex or Hermes item knowing that these boxes take months before they get to the Philippines? And which syndicate would use a balikbayan box to ship guns and drugs door-to-door? Hello?! You will get caught! Isn’t there an obligatory selfie for the recipients to prove that they have received the package?)

Binay said taxing balikbayan boxes just to cover the inefficiency of the BoC was “insensitive and callous.”

“If they want to plug ‘leaking revenues’ because some enterprising agencies or individuals use the consolidated cargo privilege extended to Pinoys abroad, huwag naman sana nila idamay ang mga inosenteng OFW. Why not go after big syndicates who try to beat the system? Siguro naman di naman kapos yung milyun-milyong budget ng BoC sa intelligence (I hope they do not go after innocent OFWs. Why not go after syndicates who try to beat the system? Perhaps, the BoC’s intelligent budget is sufficient to cover that),” she said.

The senator pointed out that this year, the BoC has P19.5 million budget for intelligence and P257-million fund is allocated for purposes of surveillance and prevention of smuggling. IDL