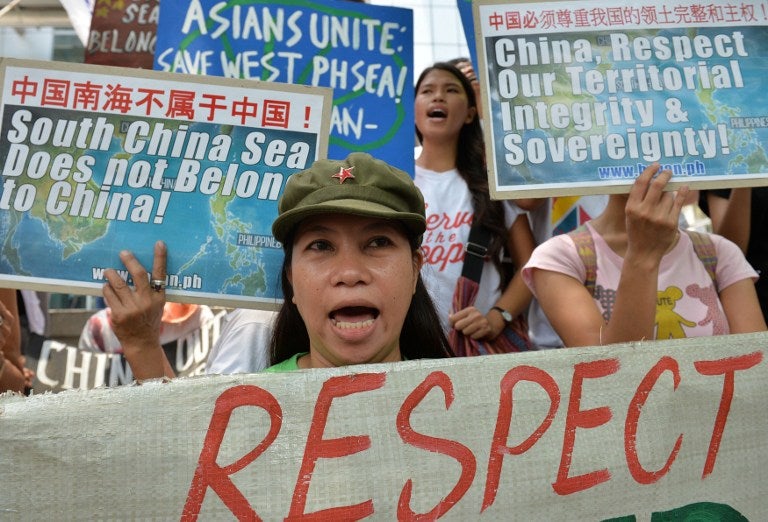 Protesters holding placards shout anti-China slogans during a rally in front of the Chinese consulate in Manila on June 4, 2015. AFP FILE PHOTO

Avoiding conflict in the disputed South China Sea – where China has in recent days conducted three test flights on a newly built airstrip on a reef it reinforced recently – is becoming an increasingly acute diplomatic challenge, analysts say.

There are rising worries over the possibility of an incident flaring up into a conflict.

An added element to the high-decibel claims and counterclaims is Vietnam’s vigorous military acquisition and modernization program, which includes the purchase of six submarines.

Vietnam refers to the Spratly Islands as Truong Sa.

Hanoi maintains that the 3,000m-long airstrip on Fiery Cross Reef, which allows for bigger and heavier planes to land, is illegal. It has demanded that China “immediately stop and not repeat” similar flights in future. But Beijing rejected the protest and later sent two more planes to land on the airstrip, prompting another Vietnamese protest. Mr Le asked China “to immediately end similar acts… that expand and complicate disputes”.

The Philippines also strongly criticized the flights, with Foreign Secretary Albert del Rosario telling a news conference on Thursday that if the Chinese move was left unchallenged, “we will have a situation where China will take a position that an air defense identification zone could be imposed”.

Beijing has dismissed criticism of the flights. A commentary on Wednesday by the official Xinhua news agency said Chinese sovereignty over the area was “indisputable and self-evident” and the test flights were “nothing more than an effort by the country to better serve the needs of the great many vessels and seafarers using one of the world’s busiest shipping lanes”.

Analysts see the commissioning of the Fiery Cross airstrip as just the beginning of an effort by Beijing to consolidate its hold.

Beijing lays claim to almost the entire South China Sea, a claim which overlaps with those of several Asean members, most critically Vietnam and the Philippines.

In Washington, State Department spokesman John Kirby said China’s landing of the plane “raises tensions and threatens regional stability”. The United States has said that it wants to ensure freedom of navigation in a vital waterway and has urged all parties in the dispute to respect international law.

On Oct 27 last year, as China worked feverishly on reclamation plans in the disputed sea, the US sent a warship on a Freedom of Navigation mission in the area.

On Wednesday, it was reported that US Defense Secretary Ash Carter had informed Senator John McCain, chairman of the influential US Senate Armed Services Committee, that the warship had passed “inside 12 nautical miles of five maritime features in the Spratly Islands… claimed by China, Taiwan, Vietnam and the Philippines”.

Carter said the mission was “consistent with both the right of innocent passage, which only applies in a territorial sea, and with the high seas freedom of navigation that applies beyond any territorial sea”.

Ian Storey, a senior fellow and specialist in regional maritime security issues at the Iseas-Yusof Ishak Institute in Singapore, said: “What we have seen over the past few weeks has become the new normal. Tensions ebb and flow in the South China Sea and… I suspect it could get worse mainly because of these facilities on the reclaimed islands which are being operationalized.”

He said over the phone: “China is building three airstrips; my guess is they will become operational within the next few months.

“That means China will be able to exert a bigger presence… and that is likely to raise tensions and lead to more incidents.”

There are already incidents.

Vietnam and China regularly accuse each other’s fishing vessels of ramming; Vietnam has released videos of Chinese boats ramming Vietnamese vessels, but these are only the incidents that come to light.

“People tell me there are many more incidents than are reported,” Storey said. “I don’t think it is in any country’s interest to see conflict, but I think it is just a question of time; one of these incidents could get ugly and someone could get killed.”

Asean has been working for years on a Code of Conduct for the South China Sea, but it has yet to materialize and analysts do not expect much of it.

Ms Yun Sun, a Washington-based senior associate with the East Asia programme at the Henry L. Stimson Centre and a non-resident fellow with the Brookings Institution, said Asean’s consensus-based decision-making has enabled China to divide the 10-nation bloc over the South China Sea issue.

“I am pessimistic that Asean has the capacity to deal with China in a meaningful manner,” she said in a phone interview from Beijing, where she was visiting.

But she downplayed the danger, saying: “There is a real possibility of… accident… but whether that accident will generate a major outcome between the two countries, I don’t think so.”

She added: “The message I have received here… is really that in 2016, China is not looking for trouble with South-east Asia.”

“Vietnam has brought an enormous amount of firepower online over the last three years.

“The more guns out there, the more things can go wrong.

“But the greatest concern is an incident at sea. There have been some very close calls that have not made it to the press.”