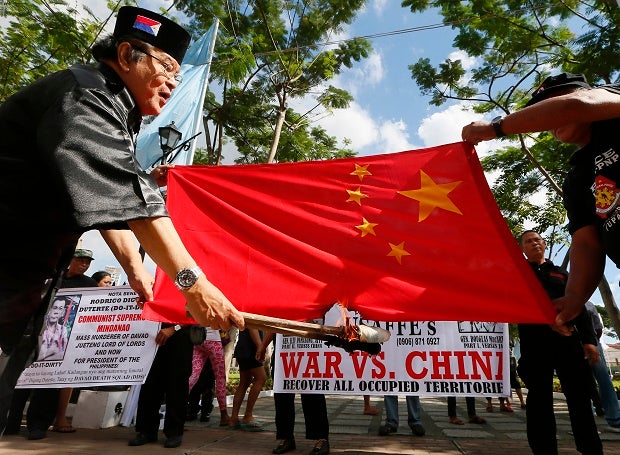 In this Dec. 4, 2015 file photo, Philippine presidential aspirant Elly Pamatong burns a Chinese flag in Manila to denounce China’s island-building in the disputed West Philippine Sea–the Philippine-claimed portion of the South China Sea. China’s campaign of island building in the South China Sea might soon quadruple the number of airstrips available to the Peoples Liberation Army in the highly contested and strategically vital region. That could be bad news for other regional contenders, especially the U.S., the Philippines and Vietnam. AP

BEIJING, China — China rejected a protest from Vietnam over a flight test it has conducted on a new airstrip on a man-made island in the South China Sea, saying it is part of China’s territory.

In a response Saturday, Chinese Foreign Ministry spokeswoman Hua Chunying said the test flight on the newly built airstrip on Fiery Cross Reef in the Spratly Islands was carried out to find out if the new airfield met the standards for civil aviation.

“Relevant activity falls completely within China’s sovereignty,” Hua said in a statement. “The Chinese side will not accept the unfounded accusations from the Vietnamese side.”

China has become more assertive in pressing its claims to the South China Sea islands, an archipelago rich in natural resources that is the focal point of rival claims by neighboring governments.

China has recently piled sand on coral reefs atop of which it built airfields, radar installations and docking facilities. As with most of its policy in the South China Sea, Beijing has remained opaque about its plans for the island airstrips.

Beijing insists its island building works are justified and don’t constitute a threat to stability and freedom of navigation. The U.S. and its regional allies have expressed concern that China’s robust assertion of its claims has aggravated tensions.

Although Vietnam already has an airstrip in the Spratlys, it is just long enough to accommodate slow-moving cargo and surveillance planes. China’s airstrip on Fiery Cross Reef is long enough for bombers capable of launching cruise missiles.