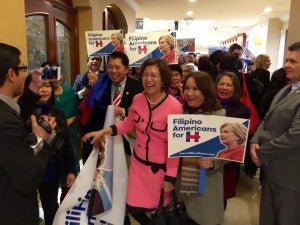 SAN GABRIEL, California—Next to the Chinese, Filipinos are the second
largest Asian American group in the whole of United States. “But ever
wonder why when it comes to benefits for cultural presentations,
academic scholarships, meron ang mga Latino, meron ang mgaChinese,
even Vietnamese but ang Filipino, wala [Latinos get a share, as do the
Chinese and even the Vietnamese, but there is nothing for the
Filipino]? Because we are not united?”

These were the words of Loida Nicolas Lewis, a zealous longtime supporter of U.S. presidential
Democratic frontrunner Hillary Clinton, as a busload of Filipino
American voters rolled into the Hilton San Gabriel Thursday morning
for the official launch of Asian Americans and Pacific Islanders
(AAPI) for Hillary’s 2016 presidential campaign.

Perhaps the closest Filipino ally of the former first lady, Lewis
noted that it was former President Bill Clinton who granted special
benefits for Filipino World War II veterans in 1998, eight years after
the U.S. Congress had allowed American citizenship for Filvets but
without benefits.

“And who was right beside him when we had our picture taken on the day
he signed the law that says Filipino World War II veterans can receive
social security here and if they go back to the Philippines they can
receive at least 75% of the benefit? Hillary Rodham Clinton!” she
enthused.

Lewis, together with Los Angeles community leader Rocio Nuyda and
lawyer Rodel Rodis in San Francisco, gathered together nearly 200
Filipinos to the rally.

“We want to portray an image of solidarity, that’s why we’re in a
bus,” said Nuyda.

But joining rallies is not enough. Bringing in the votes is crucial.
“It’s a moral obligation of every citizen to vote [in] every
election,” Nuyda stressed. 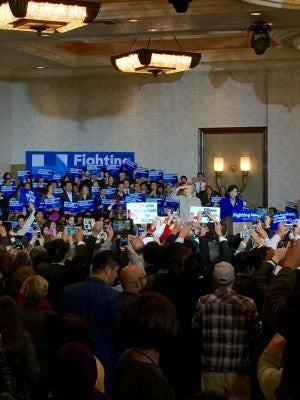 Asian Americans could be the margin of victory in the 2016
presidential elections, Lewis suggested as she thanked everyone in the
bus for waking up early to join the rally.

Addressing AAPI during the campaign launch, Hillary Clinton anchored
her message on family values and immigration themes, knowing that
Asian American families are tightly knit. She shared the poignant
story of her mother, who studied at Alhambra High School while working
as a housemaid with a kind-hearted family that supported her dreams,
and the immigrant experience of a grandfather who worked in the lace
mills of Scranton, Pennsylvania.

“I know how important family is to all of you,” Hillary Clinton said
in her speech. “And that’s how I see our country. I see us, when we’re
at our best, as lifting up families, helping families to be strong,
helping families get the support they need to do the best they can for
their children and for their parents.

“And I’ve said in this campaign, the stakes are very high. I want to
be a President who deals with the economy to make sure it works for
everybody, not just those at the top. I want to keep Americans safe
and keep our country strong around the world,” she added.

Rodis, who brought a separate busload of FilAms from the San Francisco
Bay Area, was teary-eyed after Clinton’s speech.
“I was just struck by how stark the contrast is between the
Republicans, especially [Donald] Trump, and the Democrats especially
Hillary—these are two worlds apart. We either go into a future of
hate, against Muslims, against immigrants. We see mass deportation,
misery, an economy that flounders. People will get miserable, rich
people will pay less taxes, social security gone, Medicare, all of
those gone under the Republican or Trump. Or we have a future where
those rights are protected and expanded with those comprehensive
immigration reforms where people are valued not by their faith or
country of origin but by their character. I was very touched by her
speech and I’m going to work very hard to make sure she gets elected,”
he said.

Rodis, president of U.S. Pinoys for Good Governance, noted Clinton’s
personal ties with FilAms all the way from Maria Mabilangan Haley
during her Arkansas days to Loida Nicolas Lewis in her time as first
lady. “She has had Filipinos as her key aides and associates in
various government positions. She is familiar with us as individuals
and as a community. While her Republican opponents are exclusive in
that they want to exclude minorities, immigrants, gays, and Muslims,
Hillary is inclusive and wants all of us to have more rights and
opportunities, not less. Rights to education, health care and equal
pay for equal work and a rise in minimum wage,” he said. 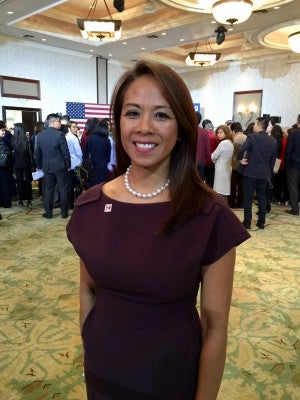 Irene Bueno, a FilAm lawyer based in Washington, D.C. and Hillary
Clinton’s AAPI 2016 campaign director, echoed these sentiments. “[She]
knows our community better and really understands us. She knows all
the issues that we’ve been facing. She knows what it’s like to be API
and sometimes feel like we’re outsiders,” she said. “She’s committed
to our issues. Immigration reform, she knows that our families have
been separated for decades. Filipino veterans on World War II, she’s
always been fighting for that. She will also make sure that we will
have people that look like me and you in her administration. And that
makes a difference to make good policy,” Bueno, who served as a
special assistant to former President Bill Clinton at the White House
chief of staff’s office, added.

Olympian Michelle Kwan agrees. “There’s nobody more experienced than
Hillary Clinton. Her experience as Secretary of State, First Lady, the
way she understands both foreign and domestic policy and to get the
job done and for the Asian American Pacific Islander community is—so I
hope the API community comes out and supports her.”

Immigration reform is a top priority in Hillary Clinton’s policy
agenda. She pledged to continue fighting for a path to full and equal
citizenship for immigrants by defending President Obama’s Deferred
Action for Childhood Arrivals and Deferred Action on Parents of
Americans, expanding citizenship fee waivers, reducing the backlog for
family visas, and increasing access to language programs to help
people boost their English proficiency.

“Being an open and tolerant society does not make us vulnerable —
it’s at the core of our strength of who we care in America. It’s a
creed as old as our foundings. ‘E Pluribus Unum’, Out of Many We Are
One. So we have a lot at stake in this election,” Hillary Clinton told
the API community at the event.

The launch was attended by a number of politicians across the nation
including Congresswoman Judy Chu (D-Calif. 27th district) and Norman
Mineta, former Transportation Secretary and one of the most highly
regarded Asian political leaders, who applauded Hillary Clinton’s
lasting support on health issues affecting Asian Americans.

Cerritos’ FilAm Mayor Mark Pulido believes Hillary Clinton is the most
qualified and experienced among all the presidential candidates. “She
has been a longtime champion for our children, our families and our
immigrant communities. She knows and understands our community’s
issues and has been a strong voice to empowering our community here in
the United States. We are here to elect her as the next president of
the United States because I believe that she is ready to hit the
ground running on Day 1,” he said.

“The Clintons in general have demonstrated a commitment to the
Filipino community way back in the Bill Clinton administration,” said
Daly City Mayor Ray Buenaventura.

“He appointed a lot of Filipino Americans and now Hillary has taken on
that role as well. She really cares about the Filipino community,
about their issues. I think she’d be a great president for us, for the
entire country,” he added.

Among the young FilAms who made it to the rally was Genevieve Jopanda,
a founding member of KAYA: Filipino Americans for Progress, which was
born from the Filipinos for Obama 2008 campaign, and currently serves
as state chair for the Filipino American Caucus of the California
Democratic Party.

“Today is a testament as to how well the Filipino community mobilized
to show up at this particular event,” she said. “You have buses coming
from Nevada, LA, San Francisco—the Filipino should not be forgotten
because we tend to be forgotten as we may not be considered a large
voting bloc but today was a really good reflection. You can see the
crowd, majority are Filipinos. Hillary also referenced Filipinos in
her speech and that’s because of the work of many FilAm leaders to
make sure that we are represented as the official API vote for
Hillary.”

Vince Gesmundo, a show producer who flew in from New York to attend
the rally, couldn’t be prouder to endorse Hillary. “If Filipinos in
America really want the U.S. government to materialize the
comprehensive immigration policy, we have to put our acts together. I
believe now is the best time to unite and give Hillary the opportunity
to help our community move forward.”

“She talked to us about our issues, she addressed our issues, she
understands us, she knows that our communities and the communities of
color are really part of this fabric called America. More than any
time after I heard her today, I really believe sincerely in our heart,
she is one with us. I feel comfortable that under her tutelage America
will move in a much better place and that folks like us—we may look
different—but we are not less than!

“Someone who is running for president in the United States is talking
about issues that I’m concerned about, that rang a bell. That really
resonated with me so I am so sure that my candidate for president is
Hillary Rodham Clinton,” Caoili said.

With the official launch of AAPI for Hillary’s 2016 presidential
campaign, community leaders have lined up fund raising and organizing
activities through nationwide chapters especially in the battleground
states where Filipino votes could swing the vote.

“We want to do greater voter registration among Filipinos. We also
want to do fundraisers to help our candidate defray the costs of
elections in the modern era. The Koch brothers have pledged to spend
$900 million to ensure the election of the Republican candidate who
will cut the tax rate for the super rich even more,” Rodis said.

Lewis for her part has volunteered to form a committee to raise funds
with a private reception in her Manhattan apartment. “With 40 people
giving the maximum primary donation of $2700, the goal is to raise at
least $100,000,” she said.