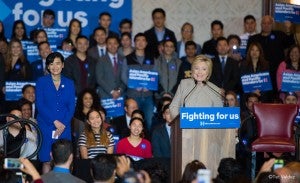 SAN GABRIEL–Democratic frontrunner Hillary Clinton launched the Asian American Pacific Pslanders for Hillary at the Hilton San Gabriel in San Gabriel, California today, January 7 in a major effort by her presidential campaign to tap the fastest-growing voting group in the country.

A veritable who’s who of Fil-Am leadership and community organizing in California joined Congresswoman Judy Chu, head of the congressional Asian American Pacific Islander caucus, and the leaders the Chinese American, South Asian, Vietnamese American communities, in an impressive show of support to Clinton.

Hillary in her speech rallying the crowd that waited patiently through the inevitable security check line, contrasted her commitment to her vision for a more inclusive society to GOP’s Donald Trump’s divisive language referring to “immigrants as rapists, murderers and suggesting that Muslims be barred from entering the country.”

Clearly the big Fil-Am delegation cheered in Clinton’s story about her young volunteer from Las Vegas she called Cheska who had benefited from the Obama administration’s DACA (Deferred Action for Childhood Arrivals).

Clinton said Cheska came here with her family from the Philippines with her father having a working visa but lost it after being laid off from his job. “Her family became undocumented. She wanted to serve our country and applied to join the Reserve Officers’ Training Corp (ROTC), where an instructor helped her apply for DACA protection. She’s now helping her four siblings with their affidavits.”

Alluding to continue efforts of the current administration to support immigrants’ programs, Clinton gave an impassioned appeal,   “Give me a chance t o give young people every chance to succeed…I believe they make great contribution to our country.

Clinton shared with her audience her family story, that she embraces the Asian American’s core family values and that her dream is for everybody’s children to “fulfill their dreams in this country of dreamers and builders.”

She said her mother was raised by her paternal grandparents in Alhambra, another thriving Asian city a few miles away from San Gabriel.

A report from the Center for American Progress on AAPI data shows Asian American voters in the last decade has nearly doubled from more than 2 million voters in 2000 to 3.9 million voters by 2012, and is estimated to reach 5 percent of the voters nationally by 2025 and 10 percent by 2044. 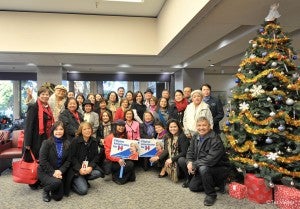 Hillary Clinton had started her outreach to Asian Americans during her 2008 run for the democratic nominations and has since been described Has the only campaign staff that more reflects the nation’s population than any other political campaign.

Jeanelle Cavero Harnel, Clinton’s national finance committee revels on Clinton campaign staff as having the most Asian Americans staffers than any other national campaigns.  In an interview with Inquirer.net Harnel said  ” we have many, many Filipino americans in the staff and field organizing and in the AAPI council, like Irene Bueno, Rina Benavides, Loida Nicolas-Lewis and elected officials Rey Buenaventura, Mark Pulido and many Filam mayors.”

A study from the “Field Poll” showed that Asian American voters are “up for grabs” in terms of party identification although democrats are favored in congressional contests and on many key issues, among Asian Americans. The Field Poll is a research group that has acquired a national reputation as a consistently reliable and authoritative source of public opinion trends in California.

In their speeches both Clinton and congresswoman Chu noted that the Asian Americans have become the swing vote as was in the case of the Virginia senate election of Mark warner over Republican Ed Gillespie in 2014.

Cong. Chu has called the AAPI, now out of the margins and has become “the margin of victory.” ‘This aapi vote is now being anticipated to be possible affect the 2016 presidential election in many states like Nevada”.

Likewise Clinton called the Asian community as a growing community that votes. After this rally, Chu hosted a $2,700-a-plate fundraiser at the Hilton followed by two more fundraisers in LA.