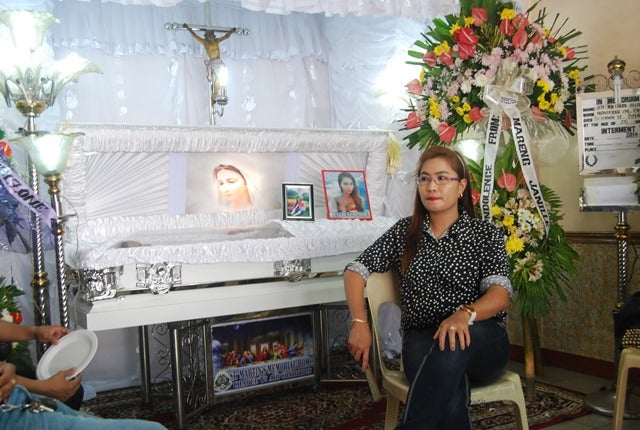 The move of US Marine lance Cpl. Joseph Scott Pemberton’s camp to ask the Olongapo City regional trial court (RTC) to reconsider his homicide conviction has disheartened the family of slain transgender Jeffrey “Jennifer” Laude, saying they felt experiencing injustice all over again.
“Despite Pemberton’s conviction, the family can’t say that it’s really over. How many times should the Laudes see injustice in this case?” lawyer Virgie Suarez, one of the counsels of the Laudes, told the INQUIRER on Thursday.
Suarez issued the statement after Judge Roline Ginez-Jabalde of Olongapo City RTC Branch 74 started hearing on Thursday the omnibus motion filed by Pemberton’s lawyers on Dec. 16.

READ: Pemberton appeals conviction in killing of Filipino transgender
In an 80-page omnibus motion, Pemberton’s lawyers asked for a “partial reconsideration” and clarification of the court’s decision, asserting that the cause of Laude’s death, as established by trial evidence, was “doubtful.”
Jabalde ruled on Dec. 1 that Pemberton, who was charged with murder, was guilty of the lesser offense of homicide for the 2014 death of Laude.

READ: Pemberton guilty of homicide in Laude case, sentenced to up to 12 years
Witnesses had identified Pemberton as the foreigner who accompanied Laude when they checked into a motel in Olongapo City on the night of Oct. 11, 2014. Laude was found dead in the bathroom of their rented motel room minutes after Pemberton left.
Pemberton was sentenced to a jail term of six to 12 years, which he would serve at a detention facility supervised by the Bureau of Corrections in Camp Aguinaldo in Quezon City.
Laude’s mother, Julita, was not satisfied with the shorter jail term that the court imposed on Pemberton because she said she had hoped the American soldier would be convicted of murder.
Lawyer Rowena Garcia, Pemberton’s counsel, earlier said the American soldier should be acquitted because the prosecution’s evidence showed there was reasonable doubt that Pemberton killed Laude.
“At stake in this case are the life and liberty of a young man who succumbed to the invitation of two ‘women’ to engage in momentary sexual relations, and ended up being sexually molested and betrayed, and then wrongfully accused of killing one of them,” Pemberton’s lawyers said in the motion.
But Suarez said the omnibus motion is based on “rehashed arguments” that have been raised and argued in court during the trial. “These arguments… have already been considered, dissected and rejected by the court,” she said.
In the omnibus motion, Pemberton’s lawyers also asked the court to allow their client to post bail.
But Suarez said Pemberton should not be allowed bail because he had been declared as an “undesirable alien” and, “more importantly, the very obvious flight risk.”
The court has given the lawyers of the Laude family 10 days to comment on the motion filed by Pemberton’s lawyers.