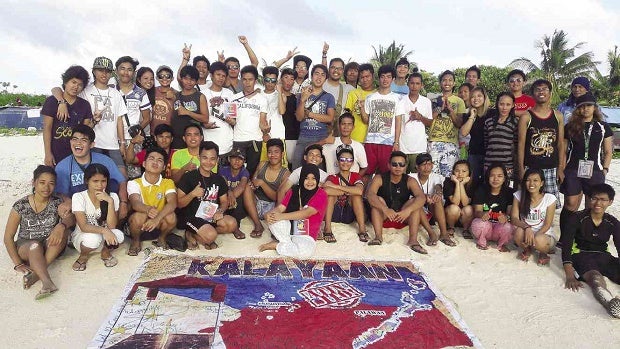 Defying China. A group of 47 young Filipino men and women arrived on Pagasa Island in the Spratly archipelago on Saturday in a symbolic defiance of China’s claim to almost the entire South China Sea. AFP/KALAYAAN ATIN ITO

China seemed unhappy with the group of young Filipino protesters who landed in a Philippine-claimed island in the South China Sea (West Philippine Sea).

Foreign Ministry spokesperson Lu Kang said in a statement on Monday that China was “strongly dissatisfied with the actions and words of the Philippine side.”

Less than 50 protesters, mostly youth, sailed for Pagasa Island last Thursday and arrived on Saturday, despite lack of encouragement from the government and the military due to security and safety reasons. They were joined by former Marine officer Captain Nicanor Faeldon and will stay there for three days.

Originally, the group “Kalayaan Atin Ito” aimed to bring 10,000 youths in a month-long protest from November 30 to December 30 on different islands in the Spratlys. The act’s purpose was to show their stand against China’s sweeping expansion in the South China Sea.

However, China maintained its “indisputable sovereignty” over the islands.

“China has indisputable sovereignty over the Nansha Islands, Zhongye Island being a part of it. We once again urge the Philippine side to withdraw all its personnel and facilities from the Chinese islands and reefs it is illegally occupying and stop doing anything that undermines regional peace and stability and weighs against the relations between China and the Philippines,” Lu said. RAM