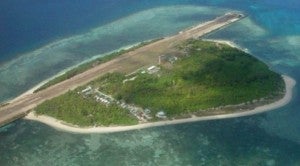 MANILA, Philippines — A military official is objecting to the plan of 10,000 youth volunteers to stage a 30-day protest at the Kalayaan Group of Islands to exert the country’s claim over the West Philippine Sea.

An official of the Armed Forces of the Philippines’ Western Command said he was “personally not in favor” of the “Kalayaan Atin Ito” protest, which would involve 10,000 volunteers from 81 provinces.

Wescom chief, Vice Adm. Alexander Lopez, said the lives of the volunteers would be in danger because of the unpredictable sea conditions in the West Philippine Sea.

“They are undertaking an unnecessary risk.  They don’t know how treacherous the sea condition is right now. If ever they do that, they are ill-advised,” said Lopez.

Lopez issued the statement in reaction to the plan of the volunteer group to stage a protest from November 30 to December 30 at the Kalayaan Group of Islands to show the world the unity of Filipinos in stressing their claims over the West Philippine Sea.

The group, with ex-Marine Capt. Nicanor Faeldon as one of its movers, has been seeking support from the public to help fund their travel to the islands, either in cash or logistical support.

In a recent interview, representatives of the Kalayaan Atin Ito said they have not received any logistical support from companies they have written to, while all the donations they received in previous months have been all used up.

At least P1 billion is needed to fund the expenses of the volunteers, including travel, food, and other necessities for the 30-day protest.

“This is why we are seeking help through media to disseminate this activity to call for partnership with other Filipinos. This is not just our fight. We are only volunteers and we cannot shoulder all expenses, so we invite Filipinos to partner with us,” the group said.

Some of the students have opted to temporarily stop their studies to join the protest, while others are working out arrangements with their schools to make up for the lost time.

Lopez, however, pointed out that travelling to the Kalayaan Group of Islands will take many days and that the sea conditions are very dangerous.

“Whoever the organizers are, they are gaining so much risk and endangering the lives of these people,” the military official said.

He cited that during the latter months of the year, the seas tend to be more dangerous with enormous waves.

“Even if you say the sea is calm, the sea is wide. It’s not like a cemented road. There are waves everywhere,” Lopez said, stressing that he was expressing his personal opinion.

Other officials are thankful for the volunteers’ patriotic fervor in showing support for the country’s claims over the West Philippine Sea.

“They are simply showing their patriotic fervor. We are thankful for this and their civic mindedness. It goes to show that many youths still care,” said the AFP spokesperson, Col. Restituto Padilla.

He expressed the military’s moral support for the campaign, but he was not aware of any material commitment that the AFP made to the group.

The group earlier said it was seeking the help of the military in ensuring their security and safety during their stay at the islands, although no agreement has been made so far.

Meanwhile, Arsenio Andolong of the Department of National Defense’s public affairs service said they have heard about the volunteers’ intention but have not yet received any communication from them.

“Filipinos can travel to islands within our territory for as long as they follow safety regulations and observe proper procedures in terms of coordinating with the concerned authorities and local governments,” Andolong said.  SFM