PARIS — The Philippine delegation to this year’s climate negotiations said there is a possibility that participating nations would agree to a cap of 1.5 degrees Celsius below pre-industrial levels in global temperature rise.

Dean Tony La Viña, spokesperson of the Philippine delegation, told Filipino journalists covering the 21st Conference of Parties (COP21) that there is already a consensus to limit the global temperature rise to two degrees below pre-industrial levels. “But we want an explicit reference to 1.5 in one form or the other,” he said.

COP21 aims to come up with a legally binding agreement to address climate change through various measures, which include limiting the rise in the earth’s temperature.

Asked how likely it is that participating nations would agree to a cap of 1.5 degrees Celsius, La Viña said, “Definitely it is better than it was than the first day. First day it would have been 20 percent. A year about maybe one percent.”

“CVF made a difference. President Aquino made a lot of difference in that. His presence here is very helpful for us. It helped us prove the point,” he explained, referring to Aquino’s speech at the start of the COP21.

La Viña said this right after their bilateral meeting with representatives of the Vatican. He said the Vatican delegation specifically reached out to the Philippine government because of its “leadership role.”

La Viña said they asked the Vatican City delegation to join them in the call for a more ambitious goal.

While there are other countries, outside the CVF, that are supporting the 1.5 degrees Celsius goal, he cautioned that there are still a number of “big” and “noisy” countries that would block the move.

Still, he said they now have a 50 percent chance of getting the other parties to agree to cap global temperature rise by 1.5 degrees Celsius below pre-industrial levels. 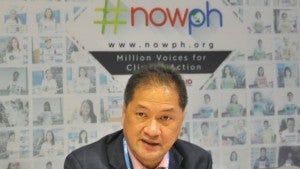 Dean Tony La Viña, spokesperson of the Philippine delegation to the 21st Conference of Parties. Photo by Sara Pacia/INQUIRER.net

“We are not hardline for 1.5. That it is exactly the language that we want. But we want a reference to 1.5 and we are flexible how that reference would be done,” La Viña said.

He said the Philippines did not want to be “hardline” because no one will listen to it if it refuses to be flexible.

“We are very strong positions but we are open to finding (other) solutions,” La Viña said, adding that this openness cultivates good relationships with partners.

“I can report to you that during the meeting yesterday with the ministers, that our minister, Secretary (Manny) de Guzman was praised directly by the chairs. In fact if I’m not mistaken he was the only who got a very positive compliment in his assertion for 1.5 degrees,” he added.

La Viña said they are amenable to having the 1.5 degrees Celsius goal mentioned in the treaty, even if the consensus would be to have a range of between 1.5 and two degrees Celsius.