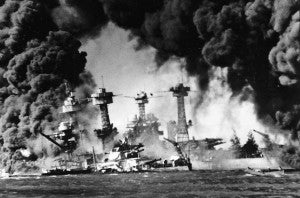 On December 7, 1941, Japanese fighter planes attacked the American naval base at Pearl Harbor on the Island of Oahu, Hawaii. More than 2,000 Americans soldiers and sailors died in the attack, and another 1,000 were wounded. The day after the assault, President Franklin D. Roosevelt asked Congress to declare war on Japan, which Congress promptly approved.

While Pearl Harbor was being attacked, Japanese Imperial Forces composed of ground, naval, and air forces invaded the Philippines, a U.S. territory at the time.  The American and Filipino military forces fought valiantly against the Japanese campaign from December 8, 1941 to October 20, 1944 – the liberation of the Philippines.

Months before the Pearl Harbor bombing, the threat of war with Japan was already viewed by the United States as imminent. In anticipation, President Roosevelt issued a Military Order on July 26, 1941, directing the Philippine Scouts, Philippine Army, and Philippine Constabulary to be under the command of the U.S. Armed Forces Far East (USAFFE) to defend the Philippines and the United States.

The Pearl Harbor bombing five months later led to a global conflict, with America finally joining World War II. As Commander-in-Chief of the Army and Navy, President Roosevelt directed that “all measures be taken for our defense.” As a Commonwealth of the United States, the Philippines was inevitably drawn into the war.

More than 260,000 Filipino soldiers fought the Japanese Imperial Forces from December 1941 to December 1946. Thousands were killed, wounded and captured as Prisoners of War. Thousands more fought as guerillas until the enemy was finally defeated, liberating the country and preserving freedom and democracy in the United States.

In remembering Pearl Harbor, we pay tribute to the patriotism, sense of duty and uncommon valor of ordinary soldiers who risked their lives defending the Philippines and the United States.

Instead of being formally recognized for their service and sacrifice, Filipino World War II veterans were stripped of the rightful benefits promised them. Rather than being honored, they were humiliated by an act of Congress – the Rescission Acts of 1946.

In the same way more than 125,000 Americans of Japanese descent were swept up in a wave of anti-Japanese sentiment after the attack on Pearl Harbor and relocated to internment camps. Filipinos who served with the promise of veterans status were shunted aside by the U.S. government and denied equal treatment to that of the American soldiers with whom they fought side by side. 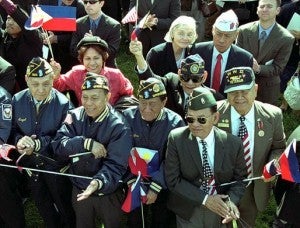 Filipino World War II veterans have been waiting for more than 70 years. Numbering less than 18,000 today, they are in the twilight of their years, ailing and still waiting for the United States to say “Thank you!” and give them the recognition they richly deserve.

But not the Filipino World War II veterans.

Still they remain steadfast in their love for and loyalty to the United States.  It’s time to close this dark chapter in U.S. History. The Filipino World War II veterans accomplished their mission. We must now accomplish ours by urging Congress to pass the Filipino Veterans of World War II Congressional Gold Medal Act of 2015.

It’s a matter of honor, dignity and doing the right thing.

The Filipino Veterans Recognition and Education Project (FilVetREP) is a nonpartisan, community-based, all-volunteer national initiative whose mission is to obtain national recognition of Filipino and American WWII Soldiers across the United States and the Philippines for their wartime service to the U.S. and the Philippines from July 26, 1941 to December 31, 1946.