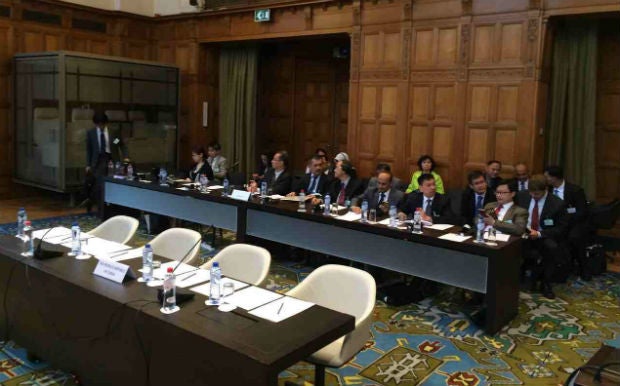 The empty table in front depicts the non-participation of China in the arbitration case filed by the Philippines, which was witnessed by international observers. PHOTO FROM ABIGAIL VALTE

The Philippines on Friday welcomed the ruling of the United Nations arbitral tribunal declaring jurisdiction over its case seeking to stop Chinese incursions in the disputed West Philippine Sea (South China Sea) and invalidate the “excessive” nine-dash line claim over the resource-rich territory.

In separate statements, the Department of Foreign Affairs (DFA) and the Office of the Solicitor General welcomed the ruling released late Thursday, where the ad hoc tribunal said it had jurisdiction over the case and would, thus, hold further proceedings on the merits.

“We welcome the decision of the Arbitral Tribunal that it has jurisdiction over our case. We look forward to the Tribunal’s further hearing on the merits of the case,” said Assistant Secretary Charles Jose, the DFA spokesperson.

Solicitor General Florin Hilbay, the Philippines’ agent in the arbitration proceedings, said the UN panel’s award on jurisdiction and admissibility “represents a significant step forward in the Philippines’ quest for a peaceful, impartial resolution of the disputes between the parties and the clarification of their rights under UNCLOS (United Nations Convention on the Law of the Sea).”

“The elimination of preliminary objections to the exercise of the tribunal’s jurisdiction opens the way for the presentation of the merits of the Philippines’ substantive claims,” Hilbay said in a statement sent via text Friday morning.

The tribunal’s ruling was unanimous, and held that China’s refusal to participate in the proceedings “does not deprive the Tribunal of jurisdiction.”

It said “the Philippines’ decision to commence arbitration unilaterally was not an abuse of the Convention’s dispute settlement procedures.”

While China is not participating in the proceedings, the tribunal took cognizance of a position paper Beijing had released tackling the dispute.

In its initial ruling, the panel rejected China’s argument “that the Parties’ dispute is actually about
sovereignty over the islands in the South China Sea and therefore beyond the Tribunal’s jurisdiction” and that it was about maritime delimitations.

“On the contrary, the Tribunal has held that each of the Philippines’ Submissions reflect disputes between the two States concerning the interpretation or application of the Convention. The Tribunal has also held that no other States are indispensable to the proceeding,” read a statement on the ruling released by the Permanent Court of Arbitration at The Hague, where the panel is holding court.