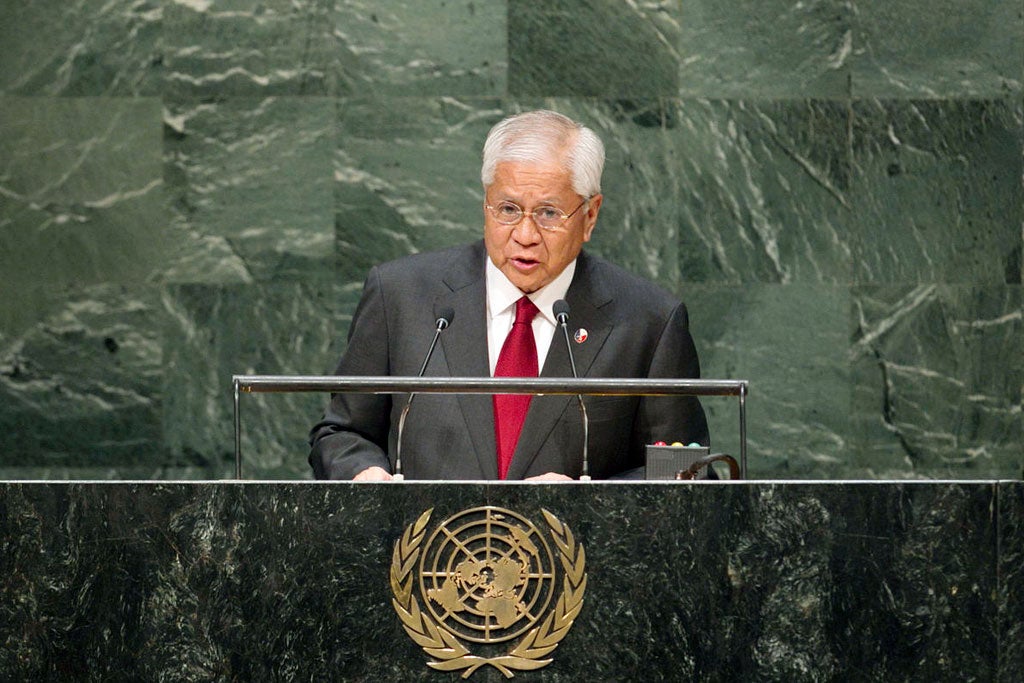 The Philippines has urged the Permanent Court of Arbitration in The Hague not to hand China the “golden key” that would allow Beijing to convert its exaggerated nine-dash line in the South China Sea into a “Berlin Wall of the Sea” and a “giant fence” owned by, and excluding everyone but, itself.

“We entrust our fate, the fate of the region and indeed, the fate of the convention (the United Nations Convention on the Law of the Sea or Unclos) to you,” Foreign Secretary Albert del Rosario told the tribunal’s judges as he wrapped up the Philippine case on Monday.

Citing arguments presented earlier by members of the Philippine legal team before the court, Del Rosario asserted that “the regimes of the continental shelf and exclusive economic zones (EEZ) under Unclos and even general international law plainly exclude China’s claim of historic rights within the nine-dash line.”

He said “when the convention says that the Philippines’ rights in its continental shelf exist ipso facto (by that very fact) and ab initio (from the beginning) and do not depend on occupation, that means that there is no room for China’s claim.”

“And when the convention speaks of an exclusive economic zone, I take exclusive to mean exclusive. That means it is ours and what is ours is ours, not China’s,” Del Rosario said.

The foreign secretary said he disagreed with China’s claim that the Philippines’ initiation of the UN arbitration was an “unfriendly act.”

“We view China as a valued friend, And it is precisely to preserve that friendship that we initiated this arbitration,” he said.

This year, he noted, was the “40th anniversary of the establishment of diplomatic relations between the Philippines and China.”

Del Rosario said the arbitration process “benefits everyone. For China, it will define and clarify its maritime entitlements. For the Philippines, it will clarify what is ours, specifically our fishing rights, our rights to resources and rights to enforce our laws within our EEZ, and for the international community, it will help ensure peace, security, stability and freedom of navigation and overflight in the South China Sea.”

“We know that in your capable hands, the rule of law will not be reduced to the quaint aspiration of a time now past, but rather will be accorded the primary that the founders of the United Nations and the drafters of the Unclos envisioned,” he said.

A ruling in favor of China “would leave the Philippines and its Association of Southeast Asian neighbors in worse straits than when we embarked on this arbitral voyage,” Del Rosario warned.

The UN tribunal has concluded the hearings on the Philippine case challenging China’s claims over disputed islands in the South China Sea and will hand down its decision reportedly by June 2016.

“The tribunal now enters its deliberations,” the tribunal said in a press statement e-mailed yesterday.

While China has refused to take part in the hearings as it claims “indisputable sovereignty” over the entire South China Sea, the judges have given Beijing until Jan. 1 to write a rebuttal to the case laid out by the Philippines.

The tribunal cited a provision under Article 5 of Annex VII to Unclos that states that the tribunal must “assure each party a full opportunity to be heard and to present its case.”

The Philippine government on Monday wrapped up a week of arguments on the merits and remaining issues of jurisdiction and admissibility in the case it initiated against China, asking the court to rule on the dispute under the Unclos.

The Philippines argued “China’s claims to sovereign rights jurisdiction, and to ‘historic rights,’ with respect to the maritime areas of the South China Sea … are contrary to the Convention,” the court said in a statement.

The Philippines also believes China has failed “in its duty to prevent its nationals from exploiting resources over which the Philippines has sovereign rights and has failed to respect traditional fishing rights at Scarborough (Panatag) Shoal,” the statement said.

The Philippines brought the case before the international tribunal to stop China’s incursions and massive land reclamation works in its territorial sea, Philippine officials told the court.

Even after the Philippines launched the court proceedings, China had exacerbated the tensions by “building artificial islands at nearly all of the maritime features presently under its control,” they said.

Beijing had also failed to protect the marine environment by using destructive fishing methods such as cyanide and explosives, while its ships were proving a hazard in the sea, they said.

China claims sovereignty over almost the whole of the South China Sea on the basis of a segmented line, the so-called nine-dash line, that first appeared on Chinese maps in the 1940s, pitting it against several neighbors.

But it is also a party to the Unclos.

After concluding the hearing, the arbitration court has given all the parties until Dec. 9 to review and submit corrections to the transcripts of the hearing.

US not allowed in

The Philippines, on the other hand, may submit further written responses to the questions posed by the tribunal during the hearing and other related materials by Dec. 18, The Hague court said.

The tribunal hearings, which began on Nov. 24 at the Peace Palace, the court’s headquarters in The Hague, the Netherlands, was held behind closed doors. But Japan, Australia, Indonesia, Malaysia, Singapore, Thailand and Vietnam were allowed to have observers present.

He told the tribunal that “with an assertiveness that is growing with every passing day, China is preventing us from carrying out even the most basic exploration and exploitation activities in areas where only the Philippines can possibly have rights.”

Referring to the UN Charter, he said UN member-states are determined to “establish conditions under which justice and respect for the obligations from treaties and other sources of international law can be maintained, and promote social progress and better standards of life in larger freedom.”

According to Del Rosario, China is “failing on both counts.”

“It is failing on both counts. It is failing to respect the obligations arising from treaties, specifically Unclos. It is also interfering with the Philippines’ sovereign duty to promote the social progress of our people, and our efforts to achieve a better standard of life for all Filipinos,” he said.

China, he also said, is “not just interfering with the progress of the Filipino people. China’s unilateral actions and the atmosphere of intimidation they have created are also trampling upon the rights and interests of the peoples of Southeast Asia and beyond.”

He pointed out that Beijing massive island building campaign “shows its utter disregard for the rights of other states and for international law.”

“China started this a year after the Philippines initiated the arbitration. It is intent on changing unilaterally the status quo in the region, imposing its illegal nine-dash line claim by fiat and presenting this tribunal with a fait accompli (a thing that has already happened).”

Beijing’s island building “not only undermines regional stability, but also the rule of law. It is moreover inflicting massive environmental damage on the most diverse marine environment in the world.”

China, he lamented, “has intentionally created one of the biggest emerging environmental disasters in the world.”

But the stakes are still greater, said Del Rosario.

“The convention’s Constitution for the Oceans is itself at risk. No state, no matter how powerful, should be allowed to claim an entire sea as its own and to use force or the threat of force in asserting its claim. No state should be permitted to write and rewrite the rules in order to justify its expansionist agenda. If that is allowed, the convention itself would be deemed useless. Power will have prevailed over reason and the rule of law would have been rendered meaningless.” With a report from AFP

Read Next
Aquino rallies 20 most vulnerable countries
EDITORS' PICK
Pagasa: Warm, sunny Sunday in most parts of PH
Is it safe to talk politics again at family gatherings? ‘The Reconciliation Dinner’ shows us what that’s like
House energy committee chair Arroyo bats for cheap electricity
EDITORIAL: To a bike-friendly future
The Best Tech Gifts For The 2022 Holidays
vivo’s coming to town to grant wishes with more holiday promos
MOST READ
LOOK: Vhong Navarro transferred to BJMP detention facility in Taguig
The Elephant Man in the Senate
Posh village as ‘shabu’ haven
LOOK: Zanjoe Marudo bonds with Ria Atayde, her family
Don't miss out on the latest news and information.