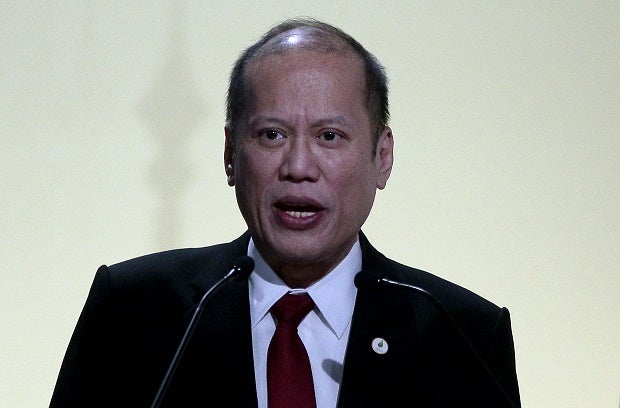 President Benigno Aquino delivers a speech at the COP 21 United Nations conference on climate change, on November 30, 2015 at Le Bourget, on the outskirts of the French capital Paris. More than 150 world leaders are meeting under heightened security, for the 21st Session of the Conference of the Parties to the United Nations Framework Convention on Climate Change (COP21/CMP11), also known as “Paris 2015” from November 30 to December 11. AFP

PARIS—President Benigno Aquino III led the launch of a “historic document” meant to influence the climate negotiations taking place at this French capital that hoped to come up with a legally binding climate agreement in two weeks.

In launching the Manila-Paris Declaration of the Climate Vulnerable Forum (CVF) on Monday afternoon (Monday night in Manila), Mr. Aquino said the document “embodies our shared aspirations for a world that is more just and more sustainable.”

READ: Aquino in Paris for climate talks, unity vs terrorism

The group has 23 incoming members from Africa, Asia, the Caribbean, Latin America, the Middle East, and the Pacific.

Mr. Aquino added: “Individually, we are already survivors; collectively, we are a force toward a fairer, more climate-proactive world.”

At least 20 other leaders from the CVF, a group of climate-vulnerable countries from middle-income, least-developed and small-island-developing states worldwide, joined Mr. Aquino at the meeting, as did United Nations officials, including Christiana Figueres, executive secretary of the UN Framework Convention on Climate Change.

The declaration hopes for an “up-scaled national climate action [that] would trigger great ambition” at the 21st Conference of Parties (COP21).

Among other provisions, the document emphasized the urgency of holding global warming at below 1.5 degrees Celsius, and not 2 degrees Celsius above preindustrial levels.

It described the 2 degrees Celsius target proposed by the European Union in the 1990s, as “inadequate,” even as other experts warned that the figure was in itself difficult to achieve for various scientific and economic reasons.

The declaration also issued the “strongest call to date for full decarbonization by 2050, with the peaking of global greenhouse gas emissions as soon as possible and at the latest by 2020, and 100-percent renewable energy production by 2050.”

The CVF’s Vulnerable Twenty (V20) Group set a target of $20 billion as well in new investments for climate action by 2020, with focus on regional, domestic and private sector mobilization.

The Manila-Paris Declaration was based on the Manila Communique hammered out by the CVF in a senior officials’ meeting held in the Philippine capital last month.

Mr. Aquino said the Manila Call to Action on Climate Change he signed with French President Francois Hollande last February called not only for climate action, “but also climate justice, cooperation, and solidarity in the financial and technological aspects of climate response.”

The President stressed how vulnerable countries have been bearing the brunt of climate change despite collectively contributing less than 2 percent of current greenhouse gas emissions.

Mr. Aquino said that since 2010, CVF member countries have had an average of more than 50,000 deaths annually due to climate shocks, and that as many as 40 million people could be displaced due to rising sea levels that threaten entire Pacific nations into extinction.

The President said the impact of climate change on vulnerable countries had stunted their economic activity and caused estimated annual losses of at least 2.5 percent of gross domestic product for those in the CVF.

“Funds that could otherwise be used for other development needs and services are channeled toward costly efforts involving relief, rehabilitation, and reconstruction,” Mr. Aquino added.

Costa Rica’s Minister of Foreign Affairs Manuel Gonzalez described as a “myth” the belief that “emission cuts [harm] economic growth,” and said that “keeping warming to a minimum to below 1.5 degrees won’t simply deliver safety and prosperity, it will also deliver justice.”

Bangladesh’s Environment Minister Anwar Hossain Manju added that climate-vulnerable countries “refuse to be the sacrifice of the international community in Paris.”

“Anything that takes our survival off the table here is a red line. All parties have an obligation to act. Not doing so is a crime. This declaration is just the beginning of our efforts to step up our voice and collaboration,” Manju said.

“Those countries that have contributed least to the problem are often affected the most,” he added.

In a meeting with President Aquino, Figueres said the group needed a “more articulated and coordinated strategy.”

“This is an urgent matter … . But it is the countries around this table and many others outside that are going to determine whether we will have an ambitious [climate] agreement, or whether it will be just an agreement,” Figueres said.

Read Next
US defies court order to jail convicted Marine in Bilibid
EDITORS' PICK
Complete your early Christmas shopping with vivo V25 Series
The vivo Y16 makes the season of giving more thoughtful for the whole family
What’s in a name? ‘Maharlika’ evokes time of mythmaking
House energy committee chair Arroyo bats for cheap electricity
Easterlies to bring rain in PH on Sunday — Pagasa
China’s Xi unwilling to accept vaccines despite threat from protests — US intel
MOST READ
Maxene Magalona sees separation from Rob Mananquil as ‘blessing in disguise’: ‘There’s no more anger’
Are we ready for a sovereign wealth fund?
SC sets 2023 Bar exams on Sept. 17, 20, 24
What’s in a name? ‘Maharlika’ evokes time of mythmaking
Don't miss out on the latest news and information.