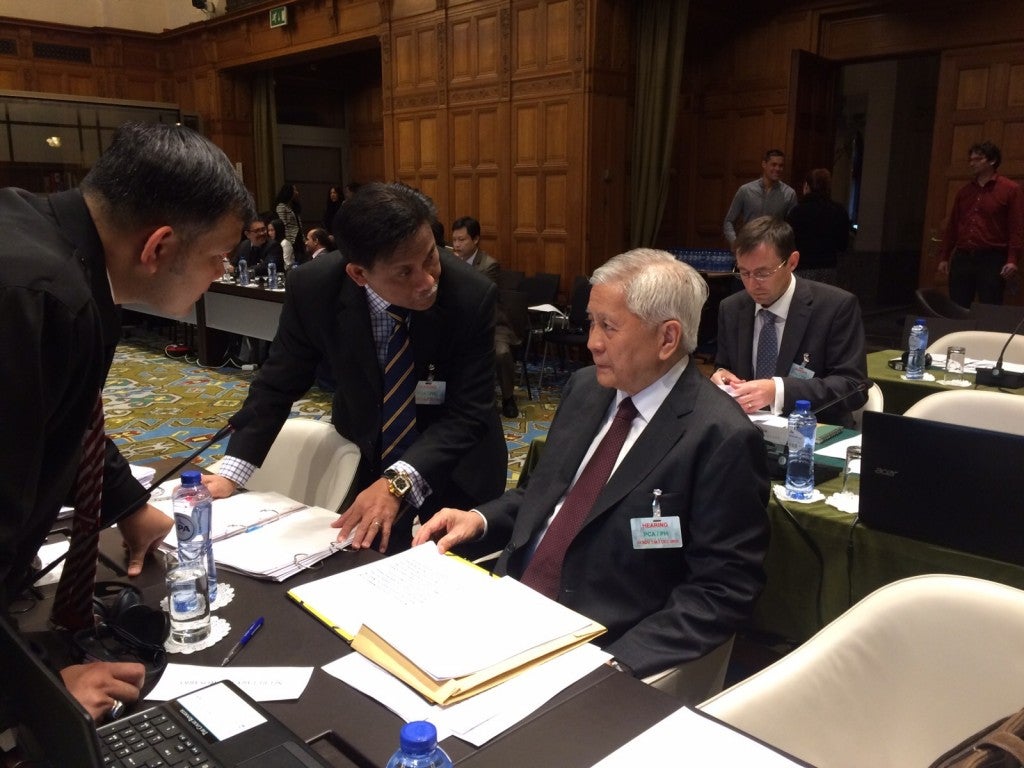 “Those who think ‘might makes right’ have it backwards. It is exactly the opposite, in that right makes might.”

That was one of the points raised by Foreign Secretary Alberto del Rosario in his concluding remarks during the last hearing on merits at the United Nations Arbitral Tribunal in The Hague, Netherlands.

The second round of oral arguments on the Philippines’ petition challenging China’s claims over parts of South China Sea was concluded on Monday (Netherlands time). A ruling is expected next year.

READ: UN tribunal to issue ruling on PH vs China case by 2016

During the final hearing, which was held at the headquarters of the Permanent Court of Arbitration, expert witnesses Kent Carpenter and Clive Schofield “responded to questions from the Tribunal regarding matters covered by their specialization,” Deputy Presidential Spokesperson Abigail Valte said.

The foreign affairs secretary said that while the Philippines never doubted that the tribunal had jurisdiction over the case, “there are some who could not believe that the Arbitral Tribunal would have the courage to apply the law to a country like China.”

He said international law is a “great equalizer” and that it also applies to “Great Powers.”

“It allows small countries to stand on an equal footing with more powerful States,” he explained.

China is said to be beefing up its maritime forces as it continues to pursue its claim on a large part of the South China Sea. It has been involved in several tense encounters in disputed waters with other claimant countries.

Fate rests in your hands

The secretary lauded the UN, which is celebrating its 70th anniversary this year.

“That great institution is an expression of the best in us,” he said.

Del Rosario explained that the Philippines only wanted to settle the dispute peacefully.

“The Tribunal knows that our disputes with China in the South China Sea have, for a long time, complicated our relationship. Most recently, tensions have risen dramatically. Unable to resolve these disputes ourselves, we thus turned to this arbitration to provide all parties a durable, rules-based solution,” he said.

He said the Philippine government disagrees with China’s stand that the arbitration was “an unfriendly act.”

“In 1982, the UN General Assembly adopted the Manila Declaration on the Peaceful Settlement of International Disputes Between States which declared that recourse to the judicial settlement of disputes ‘should not be considered an unfriendly act between States,’” he said.

Del Rosario said China is a “valued friend” and that the arbitration was initiated to “preserve that friendship.”

“We believe this arbitration benefits everyone. For China, it will define and clarify its maritime entitlements,” he said. “For the Philippines, it will clarify what is ours, specifically our fishing rights, rights to resources and rights to enforce our laws within our EEZ (exclusive economic zone). And for the rest of the international community, it will help ensure peace, security, stability and freedom of navigation and overflight in the South China Sea.”

Del Rosario enumerated the arguments raised by experts siding with the Philippines.

“When the Convention speaks of an ‘exclusive’ economic zone, I take exclusive to mean exclusive. That means it is ours, and what is ours is ours, not China’s,” he said. “With an assertiveness that is growing with every passing day, China is preventing us from carrying out even the most basic exploration and exploitation activities in areas where only the Philippines can possibly have rights.”

Del Rosario accused China of failing to uphold the preamble of the United Nations Charter: “to establish conditions under which justice and respect for the obligations arising from treaties and other sources of international law can be maintained, and…to promote social progress and better standards of life in larger freedom.”

“China is failing on both counts. It is failing to respect the obligations arising from treaties, specifically Unclos (United Nations Convention on the Law of the Sea). It is also interfering with the Philippines’ sovereign duty to promote the social progress of our people, and our efforts to achieve a better standard of life for all Filipinos,” he said.

Del Rosario hit anew China’s insistence on unilateral actions, saying it had trampled upon the rights of the people of Southeast Asia.

“China’s massive island building campaign shows its utter disregard for the rights of other States, and for international law,” he said. “China’s island building not only undermines regional stability, but also the rule of law. It is moreover inflicting massive environmental damage on the most diverse marine environment in the world.”

“China has intentionally created one of the biggest emerging environmental disasters in the world,” he added.

“It has no regard for the entitlements of other States. China is also more than willing to use force and the threat of force to enforce its perceived entitlements, even where it has none,” Del Rosario said.

Below is a copy of Del Rosario’s full speech.