US on Pemberton verdict: We will proceed in compliance with VFA | Global News
Close
menu
search

US on Pemberton verdict: We will proceed in compliance with VFA 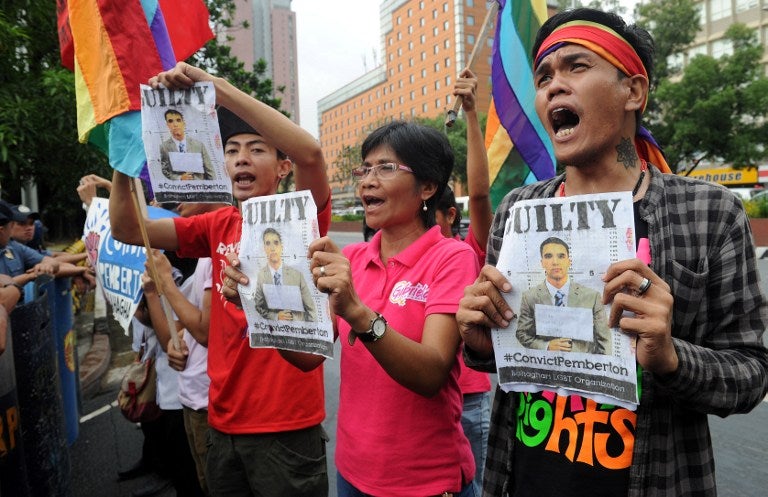 Filipino protesters rally for convicted US Marine Lance Corporal Joseph Scott Pemberton to be sent to a Philippine prison, in front of the US Embassy in Manila on December 1, 2015. A Philippine court on December 1 convicted a US Marine of killing a Filipina transgender woman in a red light district, in a case that reignited long-simmering anti-American sentiment in the country. AFP PHOTO

Following the conviction of Lance Corporal Joseph Scott Pemberton, the United States government on Tuesday said they would “proceed in full compliance with the Visiting Forces Agreement (VFA).”

READ: Pemberton guilty of homicide in Laude case, sentenced to up to 12 years

“The Embassy notes that the Olongapo Regional Trial Court Branch 74 has reached a decision in the case of Lance Corporal Pemberton,” the US Embassy said in a statement sent to INQUIRER.net.

After the promulgation, US authorities refused to turn over Pemberton to Philippine authorities, causing a stand-off in the court.

Atty. Harry Roque, counsel of the Laude family, said 12 US guards surrounded Pemberton, preventing the police from taking him.

Pemberton’s camp filed a handwritten motion for clarification, which was heard by the court.

The court ordered Philippine Commission on Visiting Forces to “submit within five days from today the Memorandum of Agreement entered into…and the written agreement between duly authorized representatives of the US and the Philippines on the confinement or detention of accused Pemberton after conviction.”

The American soldier has just returned to Camp Aguinaldo.  His detention is supervised by Bureau of Corrections, pending submission of the agreement.

The Department of Foreign Affairs said that under the VFA, Pemberton should be detained at Camp Aguinaldo.

“The VFA provides that the confinement or detention by the Philippine authorities of US personnel shall be carried out in facilities agreed on by appropriate Philippines and US authorities,” Assistant Secretary Charles Jose, spokesperson for the DFA, said in a text message to the Inquirer.

“In this case, the agreed location is in Camp Aguinaldo,” Jose said. Anthony Q. Esguerra / TVJ

Court to VFA: Produce agreement on Pemberton’s detention at AFP

Standoff between PH, US on Pemberton detention