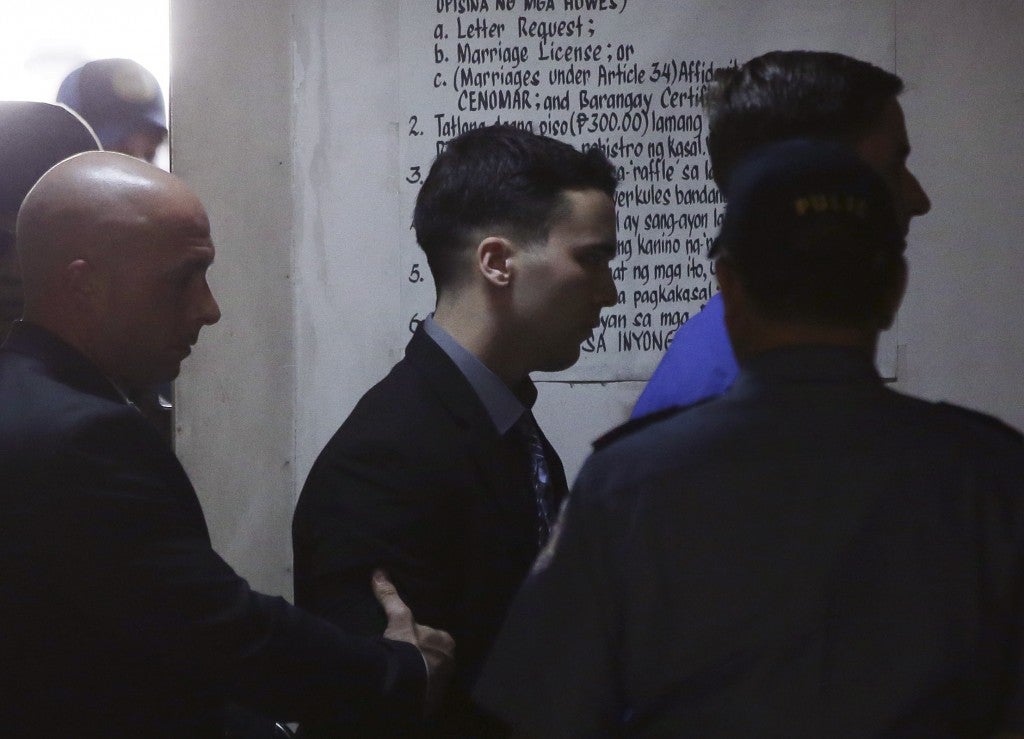 US Marine Lance Corporal Joseph Scott Pemberton (center) the suspect in the killing of Filipino transgender woman Jennifer Laude, is escorted inside a court at Olongapo city, Zambales province, on Tuesday, Dec. 1. AP

Pemberton’s convoy arrived at his detention center in Joint US Military Assistance Group at around 9:26 pm. He was transported under the security of the Philippine National Police.

Early in the day, he was convicted of homicide and was sentenced to minimum of six years to maximum 12 years imprisonment. He was also ordered to pay Laude’s family of at least P4.5 million for damages. The Olongapo Regional Trial Court Branch 74 said Pemberton would be temporarily detained at the New Bilibid Prisons in Muntinlupa City.

Philippine and US authorities had a short standoff after the conviction on who should keep Pemberton. US guards securing Pemberton reportedly prevented Philippine police from taking him. The convicted US Marine filed a handwritten motion for clarification on his detention, Laude family’s counsel Atty. Harry Roque said.

The Department of Justice then decided that Pemberton would remain at his detention site at Camp Aguinaldo.

He will stay at Camp Aguinaldo “until his appeal is decided with finality by our courts,” the DOJ said.

The court, which read the decision for about three hours, said on Tuesday that the prosecution failed to establish that there was aggravating circumstances of treachery and abuse of superior strength so as to convict him of murder.

Last August, Pemberton admitted that he choked 26-year-old Laude last October 11, 2014, in Olongapo City after he found out that he was a transgender.

The US Marine was then a part of the US-Philippine military exercises. He was detained at the US Navy ship where he was assigned immediately after the incident and was later moved to Camp Aguinaldo.

The trial started in March this year. TVJ