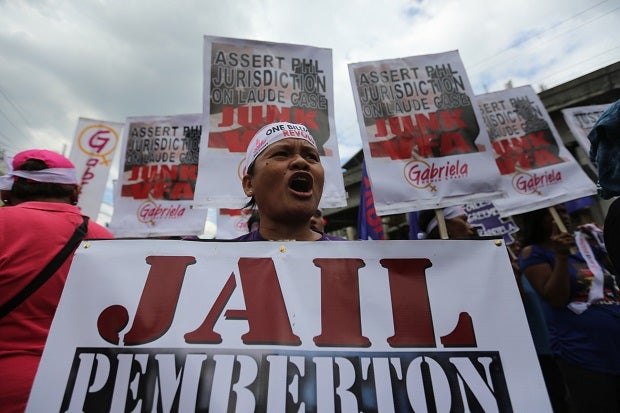 Pemberton is sentenced to minimum of six years to maximum of 12 years imprisonment.

He was also ordered to indemnify Laude’s family of a total of P4.605-million broken down as follows: P50,000 civil indemnity; P4.320-million loss of earning capacity; P155,250 reimbursement for the wake, burial and other related expenses, P50,000 moral damages and P30, 000 for exemplary damages.

The court on Tuesday said the prosecution failed to establish that there was aggravating circumstances of treachery and abuse of superior strength so as to convict him of murder.

The court said the prosecution failed to establish the elements of treachery.

It noted that investigators, even the prosecution witness Dr. Reynaldo Dave admitted that some of the wounds sustained by Laude was because he was facing the assailant.

Investigators on the other hand, particularly the Scene of the Crime Operative, said there was no evidence that the attack on Laude was swift and from behind.

“The qualifying circumstance of treachery may not be simply deduced from presumption as it is necessary that the existence of this qualifying or aggravating circumstance should be proven as fully as the crime itself in order to aggravate the liability of penalty incurred by the culprit,” the court explained.

On allegation of abuse of superior strength, the court noted that the prosecution banked on Pemberton’s physical and martial arts training and his age: He was only 19 when the incident happened last year while the 26-year-old Laude, although born a man, dressed, acted and talked like a woman.

Laude’s relatives testified they are not experts in determining Laude’s strength.

“As to the question of whether a person who is born as a man but acts, dresses, feels, talks and behaves like a woman or what is called as a transgender would diminish the strength of that person is beyond the capacity of an ordinary witness to prove and also beyond the judicial notice of the court and that an expert witness should have been presented by the prosecution to prove the same but the prosecution did not,” the court said.

In August, Pemberton in his testimony admitted choking Laude unconscious during a fight when he discovered she was a transgender.
The court said when Pemberton met Laude dressed as a schoolgirl and offering sex, he immediately agreed.

While inside the motel, he got excited but “felt something different, something that was not supposed to be there and realized that [Laude] was a dude,” which he said he found revolting.

“He was so enraged and in the heat of passion arm-locked, dragged him [Laude] inside the bathroom and dunked his head in the toilet bowl,” the court said, noting all that happened immediately after he discovered that Laude was a man.

It notes that Pemberton has no intention of killing Laude. When he went out on October 11 2014 with his fellow soldiers, it was to have fun.
“His drunkenness is not subsequent to a plan to commit felony,” the court said.

“Pemberton’s drunkenness slowed down his reflexes and mental faculties and resulted to his lack of physical coordination,” the court said adding that being a member of the Marine Corps means he is not a habitual drinker.

“Having met the requisites, Pemberton should be accorded the benefit of the mitigating circumstance of intoxication,” the court said.

On the other hand, Pemberton’s camp presented his mother who testified that his son is God-fearing, kind-hearted and is not capable of committing murder.

But the court said “the influence of good moral character depends upon the circumstances of the crime charged and upon the probative force and proof presented as to the guilt of the accused.”

“If the evidence of the crime is clear and convincing like the one obtaining in this case, evidence of good character will not prosper,” the court said.
Laude was killed on October 11, 2014.

According to Dr. Dave, he died of asphyxia by drowning. TVJ

US on Pemberton verdict: We will proceed in compliance with VFA

Read Next
US on Pemberton verdict: We will proceed in compliance with VFA
EDITORS' PICK
DSWD insists on validating 1st COVID-19 aid before allowing 2nd distribution
More health workers to resign if gov’t fails to address their concerns – group
WATCH: Anti-hoarding memo pinababawi na; Bayad sa upa pwede hulugan – DTI
Cherry Mobile teams up with Cloud Panda PH, launches online store
Leveling up your ‘lutong bahay’ with the kitchen companion you never knew you needed
Go sponsors more bills to extend the capacity of 2 hospitals during pandemic
MOST READ
MMDA to sue, slap P1,000 fine on bike group
MMDA: Commuters to blame for chaos
Calida ‘just the lawyer, not the client’ and must ‘never lose his cool’ – Macalintal
PH walks back, suspends VFA termination ‘upon the President’s instruction’
Don't miss out on the latest news and information.