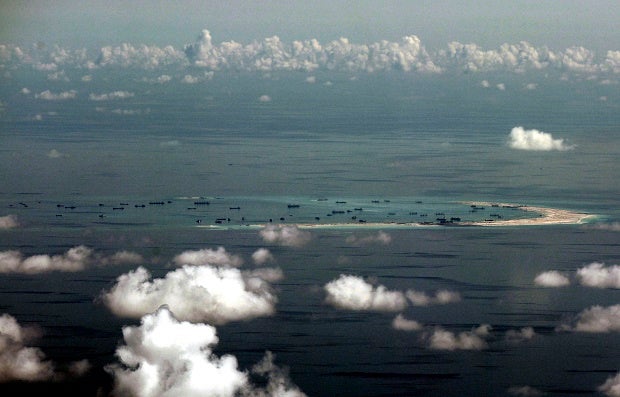 In this May 11 photo, an aerial photo taken through a glass window of a military plane shows China’s alleged on-going reclamation of Mischief Reef in the Spratly Islands in the South China Sea. AP

International experts presented their studies on the damage wrought by China’s land reclamation in South China Sea during the third hearing on merits at the United Nations Arbitral Tribunal in The Hague, Netherlands, Malacañang said on Friday.

“Professor Alan E. Boyle presented to the tribunal the damage China has done to the marine ecosystem; more specifically, to the complex ecosystem of coral reefs, biological diversity, and living resources in the South China Sea,” deputy presidential spokesperson Abigail Valte said in a statement to media.

“Boyle stated that, if unchecked, China’s activities will continue to pose a significant threat to the marine environment of the South China Sea and of all the states which border the sea,” she explained.

Valte is with the Philippine delegation in The Hague for the next round of hearings on the country’s petition seeking to nullify China’s claim to a large part of South China Sea.

Recently, the court decided that it has jurisdiction over the matter.

READ: PH petition vs China moves to 2nd round at UN court

Boyle is a member of the Essex Court Chambers in London. He has served as an arbiter for various international courts and has counselled groups on international law.

The professor argued that China has violated its obligation under the United Nations Convention on the Law of the Sea (Unclos) “to protect and preserve the marine environment, citing instances of harmful fishing practices such as blast fishing, cyanide fishing, harvesting of giant clams, catching of turtles, and other endangered species,” Valte said.

He said China is also to blame for the illegal fishing activities in the area.

Kent Carpenter, professor at the Department of Biological Sciences at the Old Dominion University in Norfolk, Virginia, also accused China of causing grave harm to the environment because of its reclamation activities.

Valte said Carpenter believes “the damage to the complex coral reef ecosystem (in the area) is close to catastrophic.”

Clive Schofield, director of research at the Australian Centre for Ocean Resource and Security in the University of Wollongong, also presented before the tribunal his findings on 47 features in South China Sea. He was earlier asked by the tribunal to determine which of the features was insular, low tide, or high tide elevations.

During his second presentation, Boyle discussed the near-collisions in Scarborough Shoal between Philippine vessels and the Chinese Marine Service vessels during April and May of 2012.

“These incidents, according to Boyle, displayed China’s ‘deliberate disregard for international law’ on the safety of maritime vessels,” Valte said.

Another expert, Bernard Oxman, enumerated the Chinese actions that “aggravated and extended the dispute” between the neighbouring countries.

“Oxman cited instances where the Philippines was blocked by China from entering Second Thomas Shoal (Ayungin) for a resupply mission. Oxman stressed that China’s denial of access forms part of ‘a deliberate policy to physically expel the Philippines and its nationals’ from the disputed features and its surrounding waters,” Valte narrated.

The next hearing will be held on Monday, Nov. 30.