Chicago’s Circa Pintig theater group gets set for 25th year 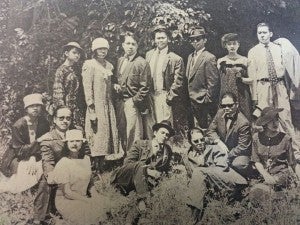 Cast of Circa Pintig’s inaugural production of “America is in the Heart.” CONTRIBUTED PHOTOS

ERIE, Pennsylvania — Chicago-based Filipino American theater group Circa Pintig is gearing up for its annual Christmas party and fundraiser for its 25th anniversary next year, while still having fun at the party, of course.

“We will have food, holiday performances and karaoke, then dancing,” says Angela Mascarenas, a founding member and the current executive director.

Beyond just preparing for the party, Mascarenas and the group’s other officers are also drawing up the activities for next year.

“Planning for the 25th anniversary is exciting. We want to make this a festive and reflective community event, in the spirit that represents what Circa Pintig stands for.”

Mascarenas was born in Manila and had been active with theater group Philippine Educational Theater Association (Peta) before moving to Chicago in the ‘80s.

She had joined the anti-Marcos group Philippine Forum and, inspired by her exposure to social theater with Peta, suggested using performances as an education tool.

“My co-members in the youth committee and I decided to focus on doing cultural organizing and started our own group in 1986. We applied for non-profit status in 1991 as Pintig cultural group,” she says. 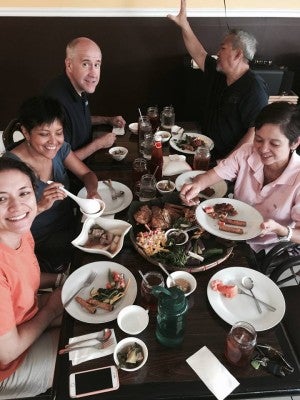 Pintig means “pulse” in Tagalog while Circa is an acronym for Center for Immigrant Resources and Community Arts.

The group’s inaugural production was the play “America is in the Heart,” based on the autobiographical novel of Carlos Bulosan.

Recent productions include “Tug of War” and its sequel “Tug of War II,” a series of short plays on war and immigration; and “Scent of Home,” a trilogy of plays adapted by Larry Leopoldo based on short stories by Bienvenido Santos.

The group’s thrust is not just training performer, but also developing artists-teachers/trainors-organizers-researchers, or “ators.”

“Very often, we have individuals who come to our events seeking to be trained as professional actors. Our usual response is, if that is all they want, then they will be better served in other theater groups,” she says.

The group immerses its volunteers and students in using theater as a tool in tackling difficult community issues. Mascarenas notes that the group has touched on issues such as internalized racism, homophobia, economic exploitation and youth trafficking, in “creative and engaging ways.”

“Circa-Pintig prides itself on being distinct in the sense that we do not exist simply for entertainment or ‘art-for-art’s’ sake. We are a theater group that engages community members in collective action through the arts.”

“We strive to produce professionally done performances without sacrificing the values and principles of collective empowerment and self-determination,” she says.

Mascarenas says that the group prides itself in contributing to “transformative social change.”

“For example, the theme of our 2015 season was ‘work, war and immigration.’ Our performances were about anti-war, mental health, disabilities and immigrant rights movements, as well as organizing around the passage of the Illinois domestic workers bill of rights.”

“The group’s ability to continue to bring insightful, thought-provoking, collectively-produced original works for over two decades is already a huge accomplishment in itself,” she says.

In addition, she points out that one significant milestone for the group is that it’s lasted this long purely on volunteer members.