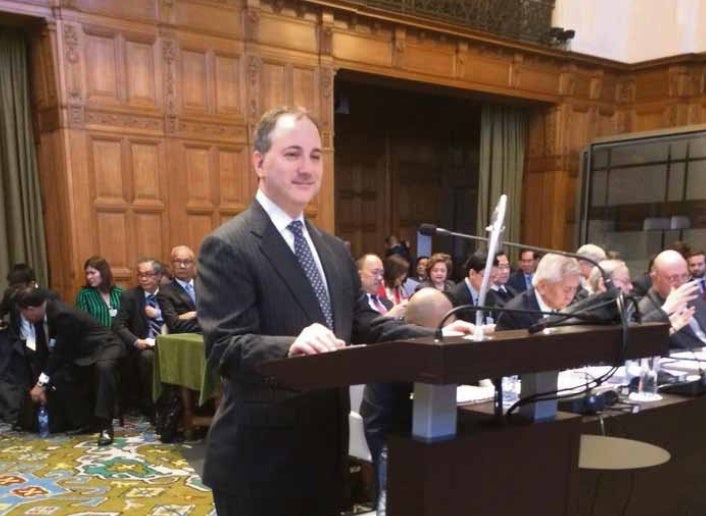 CHINA CLAIMS ‘HOPELESS’ International lawyer Andrew Loewenstein tells the UN tribunal at The Hague that China’s territorial claims in the South China Sea have no historical basis and are “hopeless and indefensible.” The tribunal will issue its verdict in six months before President Aquino’s term ends. ZOILOVELASCO/CONTRIBUTOR

The Philippines on Wednesday accused China of depriving it of its fishing and exploration rights in its own waters by seizing Philippine territory in the heavily disputed South China Sea.

It was the second day of oral arguments in the case the Philippines had brought in the United Nations Permanent Court of Arbitration in The Hague for the invalidation of China’s claim to almost the whole South China Sea.

Following up hard on its assertion on Tuesday that China’s claim had no basis in international law, Manila’s legal team charged that Beijing “violated the sovereign rights of the Philippines to living and  nonliving resources in its exclusive economic zone (EEZ) and continental shelf.”

“China’s violations are flagrant and persistent and they continue today,” deputy presidential spokesperson Abigail Valte, in a dispatch from The Netherlands, quoted Philippe Sands, a member of the Philippine legal team, as telling the arbitral tribunal.

Valte said a renowned international lawyer, Andrew Loewenstein, also addressed the tribunal, stating that “none of the conditions to establish historic rights are present in China’s case, making its claim hopeless and indefensible.”

Sands, according to Valte, argued that Panganiban Reef (international name: Mischief Reef), Kagitingan (Fiery Cross), Zamora (Subi), McKennan (Hughes) and  Burgos (Gaven) reefs “are low tide elevations under the United Nations Convention on the Law of the Sea (Unclos) and as such are not entitled to [their] own territorial sea, EEZ or continental shelf.”

Valte said Sands also presented to the tribunal the “construction activities on these features done by China and asserted that these changes cannot be the basis of additional maritime entitlements.”

China has built artificial islands by reclaiming land on the five reefs and two others in the Spratly archipelago and constructed facilities on them, including ports and airstrips that can receive military vessels and aircraft.

China’s activities in the Spratlys have rattled the Philippines, Brunei, Malaysia and Vietnam, which have overlapping claims in the South China Sea, a strategic waterway crisscrossed by sea-lanes where $5 trillion in global trade passes every year.

Taiwan is a sixth claimant in the sea, where islets, reefs and atolls are believed to be sitting on vast oil and natural gas reserves.

Valte said Lawrence Martin, another member of the 48-strong Philippine legal team, “took the podium to argue that based on the Mandarin, Spanish and English translations of Article 121 (of Unclos), features that are classified as rocks cannot have maritime entitlements despite China’s construction.”

Martin, she said, also stressed that “under Unclos, for a feature to be considered an island, it must be capable of sustaining human habitation and economic life.”

During the afternoon session, Valte said Paul Reichler, the Philippines’ lead external counsel, returned to the floor to “prove before the tribunal that no civilian settlements were established on the features in the Spratlys and that there can only be one reason why this is the case, as the features themselves are not capable of sustaining human habitation.”

Valte reported that Sands “discussed China’s interference with the Philippines’ exercise of sovereign rights under Unclos with respect to living and nonliving resources in [its] EEZ.”

He “gave as examples several incidents involving service contracts given by the Department of Energy wherein the private companies were prevented from exploration.”

The reference was to the Philippines’ natural gas exploration on Recto (Reed) Bank, which was suspended because of China’s insistence that the reef was part of its territory.

“In addition, the fishing ban mandated by China’s Ministry of Agriculture covering even areas in the Philippines’ EEZ was also discussed,” Valte said.

“A map from 1784 was presented to prove that Bajo de Masinloc has always been part of the Philippines,” Valte said, using another name by which Panatag Shoal is known.

Loewenstein closed the afternoon session by presenting satellite images of various installations constructed by China on Panganiban Reef, among other reefs in the Spratlys.

“A video simulation was also shown to the tribunal to demonstrate how a cutter suction, a machine used by China in its construction activities, destroys the seabed and transfers sand to a preselected area,” Valte said.

She said Loewenstein argued that “by engaging in these activities, China has violated the sovereign rights of the Philippines with regard to living and nonliving resources in its EEZ and continental shelf.”

The Philippines was scheduled to continue presenting its case Thursday.

China has refused to participate in the proceedings, insisting it has “undisputed sovereignty” over nearly all of the 3.5-million-square-kilometer South China Sea and saying it will not accept any ruling by the tribunal.

The Philippines has asked the tribunal, which was established in 1899, to rule on the dispute, appealing to Unclos.

At the start of the second round of oral arguments in the case on Tuesday, the Philippines charged that China’s expansive claim in the South China Sea, demarcated on new Chinese maps with nine dashes that encompass about 90 percent of the waterway, including waters near the shores of the other claimants, had no basis in Unclos.

The tribunal is expected to hand down a decision in six months, or by June next year, before President Aquino closes his term.

The tribunal has no power to enforce its decisions, but the Philippines hopes a ruling in its favor will put international pressure on China to give up its claim at least to Philippine territory in the South China Sea.