Economic union among Asean countries signed by heads of state

KUALA LUMPUR — The economic union among countries under the Association of Southeast Asian Nations (Asean) is finally official.

The declaration on the creation of the Asean Economic Community (AEC), which has been 10 years in the making, has been signed by the leaders of 10 member-states on Sunday, highlighting the 27th Asean Summit held at the Malaysian capital.

Formed as the Asean aims to become the fourth largest market in the world, the union is seen to boost economic and political ties among Southeast Asian countries. The AEC will become a legal entity on December 31.

The signing ceremony, which was held at the Kuala Lumpur Convention Center, lasted for 30 minutes.

The vision of the community is to have a “highly integrated and cohesive regional economy that supports sustained high economic growth by increasing trade, investment, and job creation; improving regional capacity to respond to global challenges and mega trends; advancing a single market agenda through enhanced commitments in trade in goods, and through an effective resolution of non-tariff barriers; deeper integration in trade in services; and a more seamless movement of investment, skilled labor, business persons, and capital.”

The Asean community will abide by the principle that the region should “resolve differences and disputes by peaceful means, including refraining from the threat or use of force and adopting peaceful dispute settlement mechanisms while strengthening confidence-building measures, promoting preventive diplomacy activities and conflict resolution initiatives.”

The economic community also vowed that the region will “remain free of nuclear weapons and other weapons of mass destruction, as well as contribute to global efforts on disarmament, non-proliferation and peaceful uses of nuclear energy.” 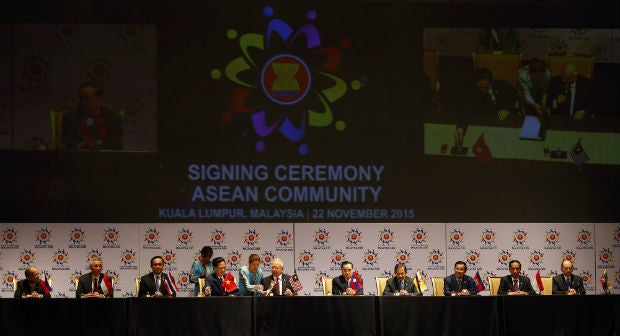