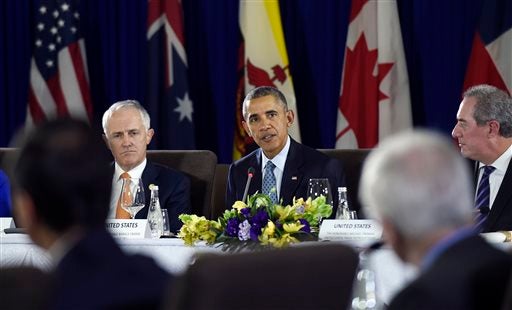 President Barack Obama, center, sitting next to Australia’s Prime Minister Malcolm Turnbull, left, and U.S. Trade Representative Michael Froman, right, speaks during a meeting with other leaders of the Trans-Pacific Partnership countries in Manila, Philippines, Wednesday, Nov. 18, 2015, ahead of the start of the Asia-Pacific Economic Cooperation (APEC) summit. AP

Where was US President Barack Obama?

The absence of the US president was glaring at the official welcome for leaders of the Asia-Pacific Economic Cooperation (Apec) summit Wednesday, leaving journalists at the International Media Center wondering why he did not show up at the event Wednesday afternoon at the Philippine International Convention Center (PICC).

Obama was the only Apec leader who did not make it to the official welcome for leaders at the Manila summit and their dialogue with the Apec Business Advisory Council (Abac), the first event that brought all leaders in one room.

US Trade Representative Michael Froman took part in the Abac dialogue in Obama’s stead, his arrival distinguished by a shorter convoy that followed the slow parade of Apec leaders aboard uniform BMW sedans between 2:18 p.m. and 3:03 p.m.

In a statement, US Embassy spokesperson Kurt Hoyer said Obama had a different schedule that coincided with the welcome rites at the PICC lobby.

He had an informal dialogue with the Latin America trade bloc, comprised of Mexico, Chile, Peru and Colombia, which is seeking entry in the 21-member Apec.

The leaders then started arriving within two minutes of each other, with Chinese President Xi Jinping the last head of state to arrive at the event.

President Aquino led the leaders on the walk to the Abac plenary session, chatting vigorously with Chile President Michelle Bachelet to his left, and Xi not too far away on the same row.

No words were exchanged between Xi and Aquino during the walk, but the two briefly exchanged glances.

A tweet by Finance Secretary Cesar Purisima showed Mr. Aquino “having a chat” before the leaders’ meeting with the Xi. Encounters between the two leaders have always been uneasy, with the ongoing dispute over territories in the South China Sea.

The Philippines will present next week its case before the United Nations arbitral tribunal, pushing forward its bid to invalidate China’s “excessive” nine-dash-line claim and halt Chinese incursions into its exclusive economic zone in the disputed waters.

The tribunal had recently ruled that it had jurisdiction over the Philippines’ legal action, moving the proceedings forward despite China’s stern refusal to participate as it reiterated its “indisputable sovereignty” over nearly all of the South China Sea.