US, China battle for influence at Apec summit 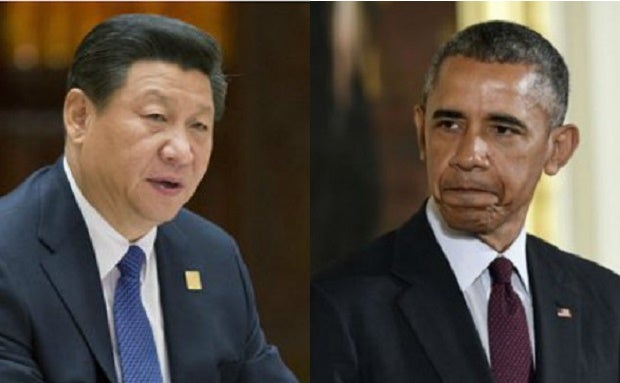 China President Xi Jinping (left) and US President Barack Obama will be jostling for influence at the Apec leader’s meeting in Manila from Nov. 18-19, 2015. INQUIRER.NET WIRES

MANILA, Philippines — Asia-Pacific leaders will meet in Manila Wednesday for a summit meant to forge trade unity but with the spotlight instead on a tense contest for territory in the South China Sea.

The two-day Asia-Pacific Economic Cooperation (APEC) gathering will be attended by regional leaders, including US President Barack Obama and his Chinese counterpart Xi Jinping.

While the 21-nation group’s mission is to promote trade, the run-up to the annual event has already been dominated by the South China Sea, home to some of the world’s most important shipping lanes.

Smaller regional nations, including summit host the Philippines, are rattled by China’s increasing assertiveness in the strategic waterway.

These actions have included a spate of island building on disputed reefs and shoals, and many Asian nations are looking to Washington for support.

That wish was granted on Tuesday when Obama flew in to Manila and announced more than $250 million in maritime aid to its Southeast Asian allies — including the offer of a warship to the Philippines, one of Beijing’s most vocal critics.

READ: Obama: We have rock solid commitment to defense of PH

APEC now accounts for more than half of global economic output and nearly half of world trade thanks in part to the growth spurt of China, which wants to lead Asian economies.

Washington is keen to shore up support among its Asia-Pacific allies as it tries to push its much distracted “pivot” towards the region — including the recently agreed Trans-Pacific Partnership (TPP) free trade deal.

Obama is expected to heavily promote the TPP in Manila on Wednesday, with a speech to a pre-summit conference and a meeting with the leaders of the other 11 nations who signed up.

But once again Obama’s trip to the region — the ninth of his presidency so far — has been blunted by events in the Middle East, with Paris mourning the loss of at least 129 people in a rampage claimed by the Islamic State of Iraq and Syria (ISIS) group.

Many leaders attending the Manila summit flew in from a gathering of the Group of 20 top economies in Turkey that also focused heavily on defeating IS and bringing peace to Syria.

Philippine Foreign Minister Albert Del Rosario said on Tuesday ministers who met to prepare for the leaders’ summit had been in unison in expressing anger over the Paris attacks.

“Everyone who spoke, spoke the same language,” he told reporters.

A draft APEC declaration due to be released on Thursday and seen by AFP condemned the Paris attacks, describing them as “atrocities that demand a united voice from the global community”.

Philippine authorities, which had already deployed more than 20,000 security forces for the summit, said security had been ratcheted up even higher because of the Paris attacks.

Significant chunks of the notoriously congested city have been closed off to traffic, allowing VIP delegates to experience an unclogged Manila but forcing angry commuters to suffer even longer travel times than usual.