‘Risk is lower, but Paris attacks could happen in US’ 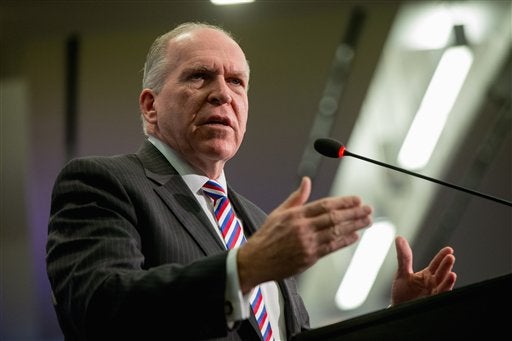 CIA Director John Brennan responds to a question as he speaks at the Global Security Forum 2015, Monday, Nov. 16, 2015, at the Center for Strategic and International Studies (CSIS) in Washington. Current and former American officials say last weeks attacks in Paris show the extent to which the Islamic State aspires to hit Western soft targets, including in the United States. “I certainly would not consider it a one-off event,” Brennan said. AP

WASHINGTON — When Fran Townsend was counterterrorism adviser to President George W. Bush, she says, her worst nightmare was that al Qaida would send men with assault rifles into malls across the U.S. heartland on a busy shopping day.

Al Qaida, focused on airplanes and spectacular bombing attacks, never attempted such low-tech mayhem. But current and former American officials say last week’s attacks in Paris show the extent to which the Islamic State aspires to hit Western soft targets, including in the United States.

“I certainly would not consider it a one-off event,” CIA Director John Brennan said Monday. “It is clear to me that ISIL has an external agenda, that they are determined to carry out these types of attacks … it’s not just Europe. I think we here in the United States also have to be obviously quite vigilant.”

The chances of a Paris-style attack succeeding in the U.S. are a matter of debate within the U.S. counterterrorism community. Analysts note that the U.S. is better positioned to thwart such an effort, equipped with a significantly more robust intelligence capacity than its European allies and a Muslim population that is far less alienated than those of France, Britain and Germany.

Steven Simon and Daniel Benjamin, former Obama administration counterterrorism officials now at Dartmouth College, argued in a New York Times opinion article Monday that Europe is far more vulnerable because of its physical proximity to Iraq and Syria and because it is home to large, disaffected, segregated Muslim populations prone to radicalism.

“We are better off because we spent this money and we have created these programs, and panic is absolutely not the right response,” Benjamin said in an interview, noting that the U.S. spends $47 billion a year on homeland security, compared with tens of millions per year in European countries.

And Daniel Byman, a terrorism analyst at the Brookings Institution, noted in an interview that many terror plots since the attacks of September 11, 2001, have been disrupted because of tips from American Muslims.

“Those things are all true, but we are still vulnerable to an attack like what happened in Paris,” said Matthew Olsen, who retired last year as head of the National Counter Terrorism Center. “You can’t totally eliminate the risk. It’s just not that hard for a handful of very committed individuals to gain the capability and the means to carry out an attack like that, and it’s very hard to defend those locations.”

French officials say the Paris attack was carried out by disaffected French Muslims under the supervision of a Belgian who had fought in Syria. Investigators will almost certainly try to establish whether the plotters communicated using encryption or some other technique to avoid law enforcement surveillance, leading to renewed debate about privacy versus security.

“I think we are at a substantial risk for a domestic event,” Townsend said. “While I have every confidence in our law enforcement and intelligence services, they don’t really have the tools and the resources they need against the size of the problem.”

After the Paris attacks, the FBI directed its field offices to be on heightened alert and to remain extra vigilant in tracking suspected terrorists. An internal situation report dated Sunday and obtained by The Associated Press shows that the FBI was tracking social media accounts traced to, and travel by, people the document says have links to extremists.

The FBI has made dozens of terrorism-related arrests in the last year of Islamic State sympathizers, though the number of Americans who have tried to travel to Syria to fight alongside militants pales in comparison to the totals in European nations. Federal officials say that some 250 Americans have attempted to or succeeded in traveling to Iraq and Syria. Some have been arrested, some have died, and some haven’t been deemed threats. Others are under investigation.

Comey struck an optimistic note in October, saying that the rate had slowed from roughly nine travel attempts per month by Americans to six over the previous three and a half months.

Even so, federal law enforcement officials have repeatedly expressed concern about the spontaneous and unpredictable nature of the Islamic State’s external plotting. The group encourages its followers who cannot travel to Syria to kill wherever they are.

In contrast to Al Qaida, which carefully selected symbolically significant targets with an eye toward creating maximum death tolls, the Paris attackers went after soft targets — a concert venue, a stadium and restaurants — that are notoriously difficult to safeguard.

“You have hundreds of people in this country who have become inspired by the ideology of ISIS and we’ve already seen examples where individuals are willing to commit acts of violence in furtherance of that ideology,” said John Cohen, a former Department of Homeland Security counterterrorism coordinator now at Rutgers University.

Michael Hayden, a former director of the CIA and the National Security Agency, said he believes the Islamic State will eventually attempt an attack on the U.S. homeland

“We will be, by nature, a tougher target,” he said, “but it doesn’t mean we’re an impossible target.” TVJ

Paris attacks may lead to US military anti-IS escalation