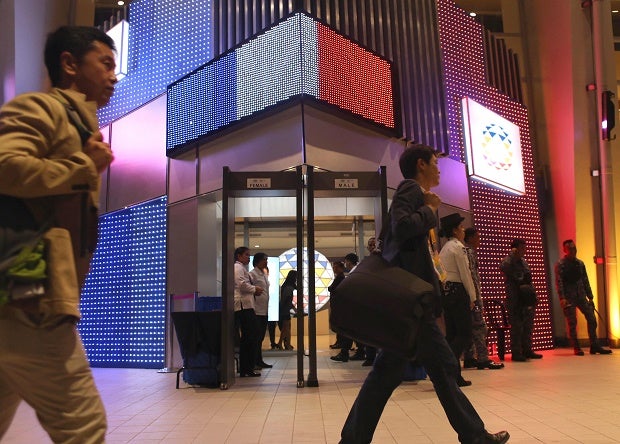 Journalists walk past the main entrance of the International Media Center of the upcoming Apec (Asia-Pacific Economic Cooperation) Summit of Leaders which is lit with the colors of the French national flag in solidarity with the French people following Friday’s terrorist attacks in Paris, Saturday, Nov. 15, 2015 in Manila, Philippines. Thousands of police and soldiers are mobilized for the annual summit of the Apec which is slated Nov. 18-19, 2015. AP

MANILA, Philippines — Leaders at a regional summit in the Philippines plan to condemn the Paris attacks, according to a draft of their declaration seen Tuesday by The Associated Press.

The 21-member Asia-Pacific Economic Cooperation forum is focused on trade and economic issues but has struggled to keep its annual gathering from being overshadowed by security and geopolitical concerns.

The meeting of world leaders, including President Barack Obama and his Chinese counterpart Xi Jinping, is being held in Manila in the wake of the Paris attacks and US military maneuvers near artificial Chinese islands in the contested South China Sea.

APEC leaders said in the draft statement that the Paris attacks “demand a united voice from the global community.”

The attacks Friday by suspected Islamic State group extremists killed 129 people and wounded 350 others. The victims came from at least 19 nations, according to French President Francois Hollande.

“We stand in solidarity with the people of France and all victims of terrorism elsewhere,” the draft statement said. “Terrorism threatens our vision of free, open and prosperous economies and the fundamental values that we hold.”

There was no mention in the communique of China’s territorial disputes in the South China Sea with its Asian neighbors but that’s unlikely to stop the rifts from bursting through Apec’s facade of handshakes and unity photo ops.

The US military maneuvers in the past month involving ships and B-52 bombers were intended to underline that the US won’t allow freedom of navigation to be compromised by China’s vast claim to the disputed waters.

The US actions were met with a rebuke from Beijing but were welcomed by American allies such as the Philippines, Japan and Australia, which are all Apec founding members.

US officials plan to further highlight the territorial disputes during Obama’s stop in Manila and later on in Kuala Lumpur, Malaysia, where he is to attend the East Asia Summit, an 18-nation bloc that also includes China and US allies Japan and the Philippines.

On Tuesday, Obama will tour the BRP Gregorio del Pilar, one of two US Coast Guard cutters that the Philippines obtained from Washington and turned into its largest warships in its anemic fleet to defend its territorial waters.

The Philippines also plans to sign an agreement with Vietnam on Tuesday to elevate their relationship to a strategic partnership. A closer alliance will allow both nations, which are currently most at odds with Beijing in the South China Sea, to deepen trade, maritime and defense cooperation.