US President Barack Obama arrives in PH for Apec 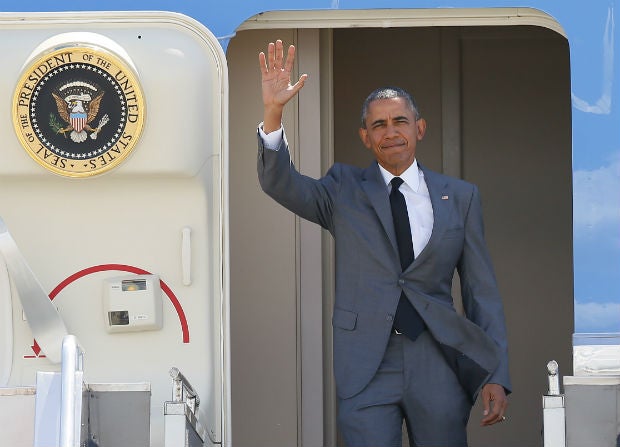 U.S. President Barack Obama waves to the media upon arrival Tuesday, Nov. 17, 2015 in the Philippines. AP

US President Barack Obama has arrived in the Philippines on Tuesday to attend the Asia-Pacific Economic Cooperation (Apec) Economic Leaders’ meeting where he is expected to talk about the territorial row of China and other Southeast Asian countries and terrorism.

Obama arrived at Villamor Airbase aboard the Air Force One which landed at 11:20 a.m.

He was welcomed by Defense Secretary Voltaire Gazmin and US Ambassador to the Philippines Philip Goldberg.

Meeting with other world leaders which include China’s Xi Jinping, Obama is said to press for pro-American trade and discuss the territorial dispute between China and other claimants in the South China Sea.

Terrorism is expected to be discussed during the Apec meet following the deadly Paris attacks which killed more than 100 people.

Shortly after his arrival, Obama is set to visit BRP Gregorio Del Pilar, where he will meet US and Filipino sailors and senior Filipino defense officials. RAM