Aquino: ‘We stand with France now’ 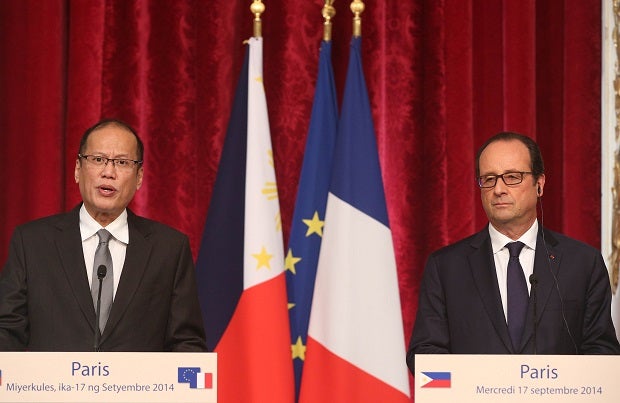 Repaying the generosity of the international community after the devastation of Typhoon “Yolanda” (international name: Haiyan), President Benigno Aquino III expressed solidarity with and support for France after the deadly attacks in its capital city.

“In our time of need, France and her people stood shoulder to shoulder with the Philippines in the wake of Typhoon ‘Haiyan,’” Aquino said in a statement.

“We stand with France now, in the firm belief that the light must never dim in Paris,” he said.

Aquino said the Filipino people “stand in solidarity with the people of Paris and all of France, in this time of deepest sorrow and the gravest outrage against the perpetrators of these crimes.”

Citing the deaths of hundreds of people in various places in Paris on Friday (Paris time), Aquino said the incident demands “a united voice from the world in condemnation and grief.”

The President said the Philippine National Police is on alert after the “atrocities” that resulted in the deaths of more than a hundred people in the Bataclan concert hall, restaurants in the city center and the vicinity of Stade de France.

“For our part, we reassure our fellow citizens that we are taking all necessary precautions…There is no credible threat registered at this time but let us all be cooperative and vigilant,” he explained.

Aquino said the Department of Foreign Affairs will issue updates on the situation and will be ready to offer assistance to Filipinos visiting and working in France.

Aquino has a standing request to visit Paris for the 21st Conference of Parties or climate change negotiations later this year. The Philippines, especially after Yolanda, has been the poster boy of climate vulnerable countries.

In February this year, French President Francois Hollande visited the Philippines to launch the Manila Call to Action on Climate Change with Aquino.

READ: Hollande to Aquino: We need your voice

France is the host country of this year’s climate change conference, which is expected to draw tens of thousands of people from all over the world, including heads of states of different countries. RAM