WHAT do the Filipino business leaders look for in the next President?

At the Meet Inquirer Multimedia Forum on Monday, three private sector leaders said they wanted the country’s next Chief Executive to be a connector, a job creator, as well as someone who inspires the people.

Responding to the question “What kind of a leader can push the Philippines to get on the train and get there faster?” posted by an Inquirer reader on Twitter, shipping magnate Doris Magsaysay-Ho noted that “one of the things that held us down was that we focused a little bit on what we don’t have.”

Ho, who chairs this year’s Apec Business Advisory Council (Abac), said Filipinos were talented and could be a great people, hence “the greatest thing the new leader should be is [he or she is] not afraid to have a very positive vision.”

“That leader has to be a connector, refine the differences between us,” she said, citing the diversity of cultures and views among Filipinos as well as the wealth gap between those who “have” and those who “have less.”

“We need someone who rallies toward a common goal. I think we’ve had too many leaders who were sort of ‘one versus another.’ It should not be us against each other, but us the Philippines against the opportunities this world offers,” Ho added.

“We have to create a new vision for our people. The new leader must have a vision, must be courageous to unite everyone toward a common goal, and must not be afraid of putting strategy in front and making everyone believe we can do it—‘kayang-kaya natin.’”

“He wanted us to become a serious country, and he has achieved a lot,” said the head of the diversified conglomerate Ayala Corp.

The next President, “to keep that standard” set by President Aquino, must “work on creating an environment that creates employment,” he said.

Zobel noted that most Filipinos want to be employed whether here or abroad, and move up the job ladder. “People are hungry to work,” he said.

But Zobel said that employment could not be created without investment.

“One area that I think we can move a notch: We have a great economy, we have a stable economic environment, but we’re still low on the scale of investments,” Zobel said.

Investments generated locally as well as those brought in from overseas are crucial to job creation, he said.

“If we can have a leader that creates an investment climate that actually takes us up to a whole different level of activity, with that will come employment. And employment will be a massive driver of people’s happiness, self-fulfillment, and it will be self-fulfilling from an economic point of view as well,” Zobel said.

Guillermo Luz, the private sector coordinator of the national organizing committee for the country’s Apec hosting, agreed with Zobel that job generation should be top priority of the next President.

“We have to focus on generating jobs, whether in manufacturing or agriculture or services. The key priority has to be creating the jobs; the second priority is to create jobs in sectors that generate productivity because that essentially creates wealth and family income,” Luz pointed out.

“What type of leader do you want is like what kind of boss do you want to work for or be with in your enterprise. Most people will want to work with an inspirational, optimistic boss because that drives a lot of energy behind getting things done,” said Luz, who is also the private sector cochair of the National Competitiveness Council.

According to Zobel, Abac is one with Apec in the pursuit of a sustainable growth track.

Part of the sustainable development agenda is disaster mitigation as well as development of livable cities across the region, Zobel said. 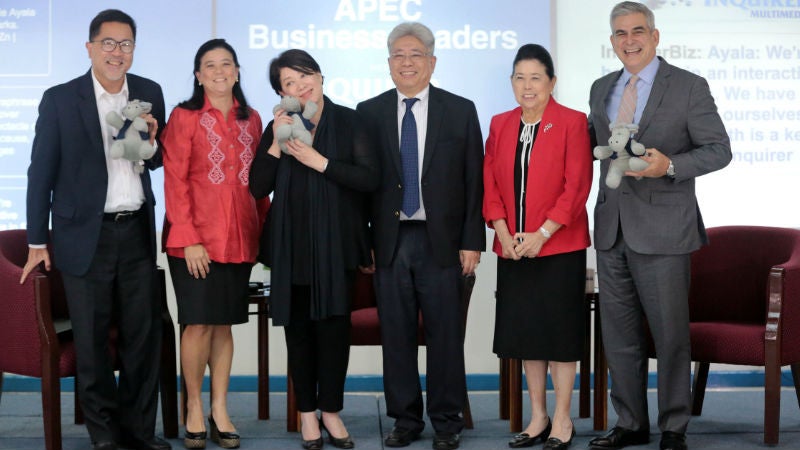 “The issue of livable cities is an interesting phenomenon. Cities have become major drivers of economies, but then they also come with problems as we have here in the Philippines,” he noted.

For cities to become livable, Zobel said urbanized areas should have good infrastructure as well as water and sanitation systems. “We need an environment conducive to people’s standards of living.”

Ho said Apec this year aimed to promote inclusive growth by bringing more people from the broader sector of society into trade.

“We feel that the efforts we’ve done are to really engage the business sector to see how we can use all these to actually define a very thoughtful future for the Philippines and our people in the years to come,” she added.

Ho said Apec could be for the “man on the street” by incorporating a “new vision” on how Filipinos could participate in the economic process.

“We have a really robust agenda for micro, small and medium enterprises (MSMEs), putting more MSMEs into global value chains, e-commerce, and having a very clear innovation agenda across the region and in our economy,” she said.

“As a country full of talent, we should really put our agenda on goods and services,” she added.

Describing Filipinos as “warm,” Zobel said hosting the Apec summit should be a “natural thing” for a very welcoming people.

“I think we have to learn as a country to host big events. The world is increasingly interconnected. Exchange of information is part of a mature and growing economy. Hosting should be a natural strength of our country,” Zobel said.

Luz said the Philippines should look at Apec beyond hosting duties.

“We can’t run the country with three cities. We need cities moving at the same time, growing in a well-managed way. That requires a lot of planning and good implementation skills,” Luz said.

“I think that’s the value to all of us, the man on the street. What makes Apec relevant to all of us, not just hosting and not just a bunch of meetings. We need to translate all that stuff leaders talk about into something with value for ordinary citizens. That’s what inclusive growth is all about,” he said. With a report from Yuji Vincent Gonzales, Inquirer.net

Read Next
Anwar daughter here to seek support for dad
EDITORS' PICK
DILG to stranded workers: ‘Stay where you are’ until Luzon-wide quarantine is over
BREAKING: 1,075 people in PH has coronavirus disease – DOH
Style and music journeys with Claudia Barretto
UP-PGH wards for COVID-19 patients finished in 5 days
IATF: Food firms to operate with 50% of workforce during Luzon quarantine
Cebu City closes its borders
MOST READ
Pacquiao to seek probe on leaked private letter from Barangay Dasmariñas
Tootsy Angara bares neighbor wanted them out of village
All 3 COVID-19 positive patients in Bicol sent home
BREAKING: 1,075 people in PH have coronavirus disease – DOH
Don't miss out on the latest news and information.