Nurul Izzah arrived in the country after lobbying for support before the United Nations and different countries in Southeast Asia.

In Manila, she asked the support of former President and now Manila Mayor Joseph Estrada, who according to her, was her father’s friend.

Nurul Izzah said gaining international support “would prove that Anwar Ibrahim is innocent. That he’s been tried in a politically motivated exercise.”

Ibrahim is serving a 5-year sentence arising from sodomy charges.

She cited the recent decision of a UN body working on arbitrary detention that Anwar’s detention was “politically motivated.” 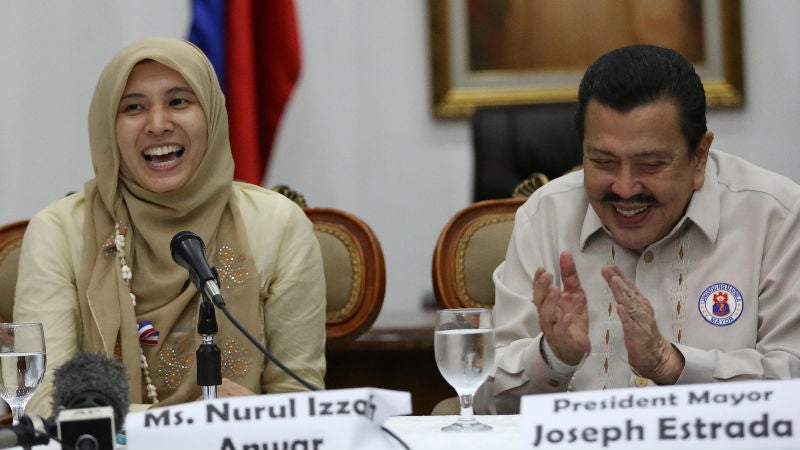 Anwar Ibrahim’s eldest daughter Nurrul Izzah Anwar meets with Manila Mayor Joseph Estrada at the Manila City Hall where she lobbied for the release of the former Malaysian Deputy Prime minister. Anwar Ibrahim is currently detained for charges of Sodomy which he denies adding that he was imprisoned for being a threat to now Malaysian PM Najib Razak. INQUIRER/ MARIANNE BERMUDEZ

“[The UN decision] puts much needed pressure on the prime minister to do the right thing which is to free Anwar. And to end prosecution against the opposition,” she said.

Nurul Izzah, who herself was arrested this year, said she would “continue the struggle” whatever the result of her current actions would be.

She added that her visit to Manila was not limited to Anwar’s plight but also to strengthen regional ties with a neighboring country.

Estrada, for his part, called for Anwar’s immediate release from detention.

He believed Anwar was “a victim of political injustice” and called on the Malaysian government for compassion and respect for international law. Aie Balagtas See