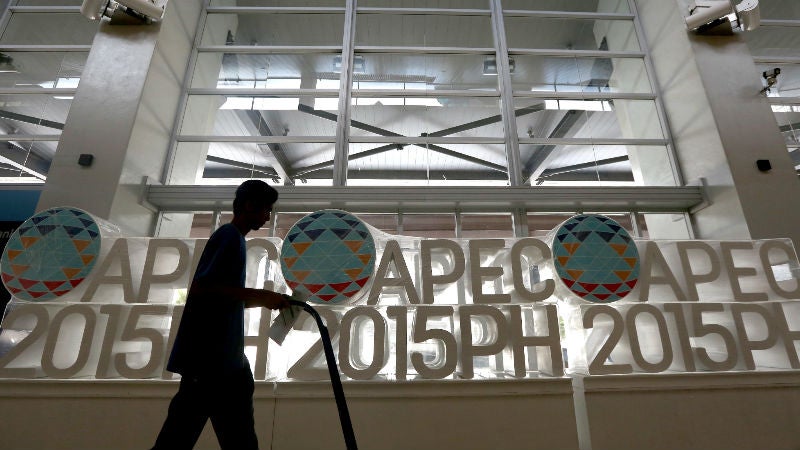 Workers rush to install APEC signs at the World Trade Center in anticipation of the world leader’s meeting on November 18-19 2015. INQUIRER/MARIANNE BERMUDEZ

Paynor also underscored the importance of the security measures to be implemented for the 21 heads of state coming to Manila for the Nov. 17-20 event, saying this was the “most challenging” aspect of the preparations.

“This is an all or nothing game. And that’s why we request the understanding of everyone if it’s possible let us cooperate and understand why we have to do certain things. It is not because we want to do it. In fact, it’s very difficult to do it but we have to do it because our guests are not ordinary guests,” Paynor told a press briefing at Malacañang.

“And if anything happens there it is a collective fault of the whole Philippines as host,” Paynor said.

A veteran of 16 Apec summits, Paynor said, “Our security measures are just right.”

As host, all Manila wants is to avoid delays in the movement of the leaders, he said. “Of course, some are more popular than the others, especially one who has just been elected and [has the] ‘rock star’ quality,” Paynor said, referring to newly elected Canadian Prime Minister, the 43-year-old Justin Trudeau.

Paynor said studies showed that the collective growth of Apec economies since its inception in 1989 has been at an average of 8 percent annually.

“This means that this group of 21 economies comprise about 80 percent of total world economies that grow at 8 percent every year. Whatever we say, it has a trickle-down effect. We just couldn’t feel it or explain it to the people,” Paynor said.

Paynor said hosting the Apec also “fuels the economy” of the Philippines. The P10-billion budget for the summit has benefited the economy as money was spent on tourism and infrastructure.

He urged militant groups planning protests “not to embarrass” the guests.

“It’s like inviting one to your home only to be insulted. If there are issues, we can talk about it. But to embarrass them because you have a different objective, that’s just being rude, I mean, as plain and as undiplomatic as I can put it,” Paynor said.

The administration wants to be a gracious host, he said, and wants to avoid bilateral issues such as the South China Sea dispute, he said.

President Aquino is expected to have at least 11 bilateral meetings, but officials have yet to confirm if these include a one-on-one with Chinese President Xi Jinping.