Using cosplay to get through anxiety 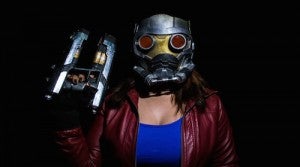 Her heart rate starts rising. Her hands begin to sweat and shake. She paces back and forth.

“I feel like something is going to happen to me but nothing is really there,” she says. “[I tell myself,] ‘There is nothing wrong. It’s okay. This is just your body being weird again.’”

This is what an anxiety attack feels like for Karina Perez, a 20-year-old student at Pierce College.

She started having the attacks while she was involved in an abusive relationship. She also fell into a depression. The relationship is over, but the anxiety attacks have continued.

“During my first year at Pierce I went through an abusive relationship that no one knew about,” Perez says. Her boyfriend, she says, was emotionally abusive, controlling and unfaithful.

The emotional strain made it hard to focus at school. “I was 18 at the time, very young and inexperienced, so it really hit me,” she says.

“It was a pain to go to school and try to concentrate when my mind was being blown up by everything else.”

Even though Perez was determined to succeed in college, her inability to focus led her to drop all her classes during her first semester at Pierce. Then she decided not to take classes the following semester, setting her back a full year.

“It was shocking to see my grades so low because I was always used to seeing good grades. When I was younger I graduated with honors,” Perez says. She started losing weight.

Her internal struggle wasn’t apparent to the people around her. “People thought I was just taking a year for myself,” she says.

Dr. Janina Scarlet, a licensed clinical psychologist at the Center for Stress and Anxiety Management and Sharp Memorial Hospital in San Diego, says there are many popular misconceptions about depression.

“Many people think that a person who is depressed is sad all the time, is unable to laugh, is ‘weak’ and/or suicidal. None of these are true of everyone,” Scarlet says. “Many people with depression might not be ‘obviously’ depressed. They might laugh and appear happy while struggling on the inside.”

Perez agees. “You can be the most active person in the world and be depressed,” she says. “Look at Robin Williams; he made so many people happy and looked like such a happy person but he was struggling with so much.”

“I lost so much weight. I basically lost interest in everything,” Perez says. “I was still trying, but there were days when I didn’t have the will to get out of bed.”

Dr. Scarlet says that symptoms of depression include a low or sad mood, as well as difficulty enjoying things one used to enjoy. Individuals may also experience fatigue, trouble eating or sleeping, thoughts about being worthless, thoughts of suicide, and withdrawal from social activities.

Over time Perez was able to deal with her depression and anxiety in a unique way.

“I realized that my life was going nowhere,” she says. “Therapy was alright, but I realized that putting my mind into projects was helping [more]. I would dance, focus on school projects, and then I started cosplay.”

In cosplay (“costume play”), people dress up as fictional characters whom they like or admire, says Perez. Cosplayers go to gatherings and conventions and meet with others who have similar interests.

“It is a very open and loving community that I fell in love with,” Perez says.

Dr. Scarlet says that an activity like cosplay can have an important role in some people’s healing process. 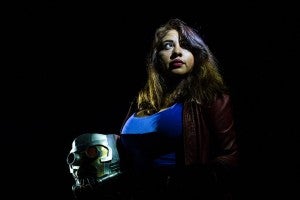 “There is research that shows that meaningful social engagement, such as what cosplay provides … can potentially reduce depression and help buffer the individual against depression,” Scarlet says.

Scarlet has herself pioneered a type a therapy she calls “Superhero Therapy,” the goal of which she says is to “help patients become the very kind of hero that they want to be despite any limitations they might face.”

She incorporates concepts around superheroes and other fictional characters into her therapy practice, which she says can help patients better identify with their own struggles.

It’s common for people to relate with fictional characters, she says, and she uses those characters’ vulnerabilities to help her patients realize that everyone experiences them.

Due to the positive feedback Perez was receiving on her costumes, she started a Facebook fan page called KPM Cosplay where she posts pictures of the costumes she creates. She has over 4,500 followers and makes appearances at conventions.

“Cosplay [has been] my own form of therapy,” Perez says. “It [has been] nice to bring so much happiness to others. It was unexpected.”

Perez’s costumes portray characters she identifies with, both female and male. They’ve included Star-Lord from Guardians of the Galaxy, Khal Drogo from Game of Thrones, Batman, and multiple characters from the X-Men.

“The X-Men are made up of people that fight for acceptance so I relate to that,” Perez says.

After graduating from Pierce, Perez plans to attend law school. Her dream job would be working on a legal team at SpaceX, the aerospace company founded by Tesla CEO Elon Musk, which manufactures and launches new kinds of rockets and spacecraft.

“This company brings a lot of science into reality. I want to be in a place where I can merge different parts of my life and be completely happy,” Perez says.

Now that Perez has found a way to take control of her anxiety and depression, she encourages people suffering with depression to seek help with friends and family.

“Don’t be afraid to accept that there is something wrong going on,” Perez says. “How else is anyone supposed to help you if you don’t say it?”

“There will be times when things will be bad,” says Perez. “But you can’t let anxiety or depression stop your life.”

At this point, Perez says she’s learned to embrace her anxiety.

“If the anxiety went away [completely] I would lose a part of myself,” Perez says. “It is a part of my personality and a part of what pushes me. It is not necessarily a positive thing in my life, but I’ve learned to turn it into one.”